The Danish company Athena Investments, has won a new arbitration filed against Spain for the damages caused by the change in the regulatory framework for renewables, which cut the premiums received in these investments, and the Spanish State will have to pay 11 million euros.

The company has informed in its website that that amount covers the damage, the costs of the arbitration and others who had the company.

Likewise, it has indicated that it has been awarded the payment of interest on damages is to be counted from 30 June 2014 until the final date of the payment of the amount recognized.

Athena Investments started in November of 2015 arbitration proceedings against Spain under the Treaty of the Energy Charter, an international agreement that covers all aspects of activities relating to energy including trade, transit, investment and energy efficiency.

According to the Danish firm, the changes that were made in the legislation negatively affected the value of the investment they had made in previous years in solar power plants, and violated article 10 of the Charter of the Energy on the promotion, protection and treatment of investments.

At the time that caused the regulatory change, Athena Investments, was the owner of photovoltaic plants in Spain that amounted to a total installed capacity of 6.7 megawatts (MW).

The new arbitration which obliges Spain to pay 11 million euros to Athena adds to previous ones by the change made by the PP Government in the retribution to renewables.

In may 2017, the Icsid issued a ruling that forced Spain to pay 128 million to the fund british Eiser Infrastructure, which claimed 298 million, and in may of 2018 ordered to compensate Masdar, the renewable energy subsidiary of the sovereign wealth fund of Abu Dhabi Mubadala, with 64,5 million also by the cut of the premiums, issue the claimed 165 million euros.

Masdar has also been present in the courts of Columbia (U.S.) to run the award had not been complied Spain voluntarily to the above-mentioned Icsid awards.

in Addition, in February the Arbitration Institute of the Stockholm Chamber of Commerce obliged Spain to pay 53.3 million euros to Novenergia, with headquarters in Luxembourg, by the cut in premiums to its photovoltaic plants in Spain, although subsequently the Swedish justice suspended the decision indefinitely.

in Addition, in June this year, the Icsid issued an arbitration award which compels Spain to pay 112 million euros to the fund Antin cut of the premiums to the renewable.

Some of the arbitrations could be in question after which the EC will consider in July illegal the arbitration mechanisms between member states, although representatives of investors who have resorted to international arbitration by the change in the system of premiums for renewables in Spain considered that the communication that the Commission issued in this sense there is no "binding legal instrument".

The EC communication points out that the national courts are obliged to annul any arbitral award issued on these bases, and give up to apply it.

The minister for the Ecological Transition, Teresa Ribera, said last August that the claims against Spain before the international instances for arbitration by cuts in premiums to renewable energies undertaken by the previous Government exceed 8,000 million euros.

1 Anatomy of a literary success in TV: the truth of... 2 Theresa May reiterates: "we're Not going to change... 3 Lorenzo Silva: "Màxim Huerta was wrong. I, too, know... 4 Another life with a second family for homeless people... 5 The Borussia Dortmund runs with the option of purchase... 6 David Weinberger: "The Internet error was to think... 7 How to Take A Perfect Photo For A Dating Profile 8 The Provincial of Castellón matches the template... 9 Goodbye, flying car: the transport of the future has... 10 The 'rhino' of the Triassic: the first giant terrestrial... 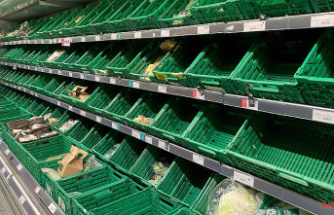 Supply crisis on the island: Britons fear for tomatoes, cucumbers and pears

Anatomy of a literary success in TV: the truth of...