Inflation is estimated to add an average of 90 euros per month to the household's monthly cost.

France Inter was warned Wednesday, June 1st by Economy Minister Bruno Le Maire that inflation "will continue to be high" for "several months.

France Inter was warned Wednesday, June 1st by Economy Minister Bruno Le Maire that inflation "will continue to be high" for "several months." Galloping inflation comes with a price: It could mean an additional cost of 90 euro per month for households. One third of that is due to rising energy prices and one third to transport costs. The other third is due to expected increases in average supermarket baskets.

According to the Inflation Observatory, 60 million consumers subscribe to the magazine. The NielsenIQ institute is also a partner. It estimates that each month it will cost "on average 90 euros more" to absorb the price rise.

The magazine stated on Wednesday that this figure was based on the actual fuel, energy, and consumer goods spending in household budgets.

This last item of expenditure varies based on the household composition. A family spending an average of 38 euros per month more than a couple with children would spend 21 euros, according to the magazine.

According to INSEE's first estimate, inflation rose again in France in May to 5.2% in one year. This was above the 5% mark for first time since September 1985. Inflation year-over-year was 4.8% in April. This is already a record for the country, and has been at its highest level in nearly 37 years.

1 Star League / Handball. Chambery has 18! 2 Delivery of heavy weapons: USA want to strengthen... 3 Clear majority: Danes vote for military cooperation... 4 Because of Church leader Kirill: Hungary blocks EU... 5 Delivery of System Iris-T: Melnyk thanks Scholz "from... 6 Soccer. Benjamin Mendy is being charged with a eighth... 7 19 kilometers from the coast: Germany wants to drill... 8 Defamation verdict: Heard and Depp guilty - but she... 9 Saxony: Zwickau beats Göppingen 25:21 in the relegation... 10 North Rhine-Westphalia: Police and customs carry out... 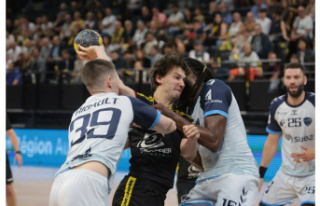