If you are looking for the right motorcycle helmet, you can choose from a wide range, from very inexpensive to really expensive. 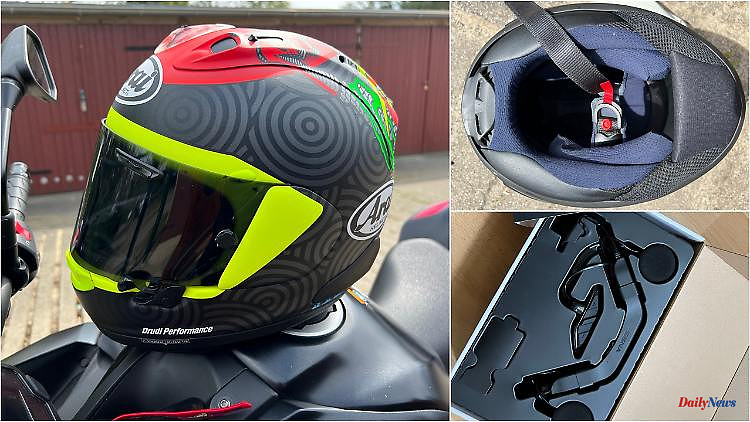 If you are looking for the right motorcycle helmet, you can choose from a wide range, from very inexpensive to really expensive. The Arai RX-7V EVO belongs to the last category. But there is a reason for the price. You will find out if you cannot install the ACS10 Sena communication system yourself.

Motorcycling is a matter of the heart, the right helmet is a matter of the head, because the shape of the human control center is very different. It's not just about the circumference, the size of the ears or nose also plays a role. And then, of course, you have to decide what the helmet will be used for. In principle, it is the case for the amateur rider that he not only romps around on the race or cross track, but also rides on the street. In this respect, the headgear should not only protect if necessary, but also be comfortable and chic for the vain, to which the author counts himself.

If you are looking for a helmet that fulfills its purpose on the track as well as on the country road, motorway or in the city, the Arai RX-7V EVO should compete for the ntv.de test. Admittedly, at over 1000 euros, the helmet is at the top of the list. But there's a reason for that: the philosophy of the Japanese company, founded in 1926, is that a rounder, harder shell can enhance the helmet's ability to better distribute the impact energy in a fall and thus protect the head more efficiently.

Arai emphasizes that this finding is based on decades of evaluating helmets after a fall, which in the end has significantly improved the sliding properties. The RX-7V is the latest development in this regard. The helmet also complies with the ECE-R-22.06 test standard, which is binding for all helmets manufactured from June 2023.

In addition, Arai justifies the price for its helmets not only with the development performance, but also with the fact that the helmet shell is made of more than 20 materials, all of which are made by hand by so-called "shell experts". All other steps up to painting, which takes three days per color, are also carried out by hand.

How hard the shell is is shown by the fact that the drills used to drill the holes for the visor have to be replaced after 80 shells. All in all, one can say that the production of an Arai helmet is a manufacturing process. If you wanted to compare that with a car, you could perhaps cite Bentley or Rolls-Royce, which in turn would justify the price.

And indeed, the manual work is also reflected in the wearing comfort. The Arai in size S fits perfectly on the tester's head. The big ears don't get stuck, the forehead and cheeks aren't pressed in, and yet the RX-7V EVO remains almost immobile even at very high speeds. The clasp is a double D, the textile straps of which are pleasant to the touch and can be guided through the rings without any fiddling.

Speaking of fumbling: Arai has covered the visor mechanism to reduce background noise. Which, by the way, as far as the author knows, no other helmet manufacturer does. Nevertheless, the visor change is absolutely problem-free. The panels are connected to the helmet with plastic straps and overstretching the visor releases it from the anchorage. Installation is carried out in the reverse order.

The visor lock is less simple and convenient. It is supposed to release the visor when you press it up with your left thumb, but usually only works when you press it. In fact, that would be the only real criticism of the Arai RX-7V EVO. Because in addition to the almost cuddly interior, the helmet also has excellent ventilation. There are three channels on the top alone, the sliders of which can be opened and closed very easily, the chin ventilation can be adjusted in three stages and there are two further ventilation controls on the visor itself, which can be folded up and down as required.

As for the volume of the helmet, that's very subjective. One is more sensitive to wind noise while driving, the other is not. The fact is that the RX-7V EVO is very quiet in the lower speed range. From 200 km/h the background noise can no longer be avoided, even with an Arai. But you can now feel the exceptionally good aerodynamics. Although other manufacturers with additional wind tunnels could have one or the other advantage here. The Japanese do not do without it out of tradition, but because they say that any change in the design would make the helmet less safe for the wearer in an emergency.

However, there is another special feature of Arai that the author was only able to find out when he wanted to build the ACS10 communication system specially developed by Sena into the helmet. But removing the interior upholstery was the end of it. A professional was needed. And the author found it in Jörg Kempf from DSB Berlin. Not only is the shop an official Aprilia dealer, it is also an Arai Pro shop. So the man looks at the helmet and says, "You do realize the ACS10 was designed for the Quantum and not the RX-7V EVO?" Yes, if you can read, you have a clear advantage, as it says so on the packaging.

However, Kempf removed the inner workings of the helmet in tenths of a second and after what felt like 20 minutes placed the transmitter unit including the battery and antenna, the microphone, the headphones and the control unit. Upholstery back in and what's the point of all this long talk? The connection via the Sena app, which incidentally also contains the operating instructions, is quick and hassle-free, the sound is fantastic and the telephone partners hardly ever get along because of the excellent communication. Yes, but even that has its speed limit. From a speed of 150 you should switch off the music, because now the wind is louder than any electric guitar.

Well, it's not common anyway to equip a race helmet with a communication system. Especially since the headset units are usually as big as a GoPro and stick to the helmet like a foreign body. Unlike the ACS10. Here, the control unit is so unobtrusive that on the one hand it can hardly be seen, and on the other hand it does not cause unnecessary turbulence when driving fast. In this respect, the almost 200 euros are a good investment. Once again, if you also have the right helmet. And the author believed he had found it in the Arai RX-7V EVO.

But after Kempf had the helmet put on to try it on and the author found that nothing pinched, creaked or pinched, he said: "It sits too low and the tip of your nose should hit the visor at high speeds." Uh, how now? "Normally," says Kempf, "an Arai is worn for four to six weeks, then people come to us, we look at how the upholstery has changed and adapt it exactly to the shape of the head." In fact, Arai has packed the pads into the helmet in layers. You can increase or decrease five millimeters thick here. And it is precisely this process, which is measured by the "north-south orientation", i.e. the forehead and the back of the head, that gives the inner workings the ideal fit.

In this respect, everything is clear: after the next ride on the track, Kempf will be visited at DSB Berlin and we'll see how the cushions have shifted by then. So sometimes even a premium helmet needs a professional helper. But then everything should be safe. 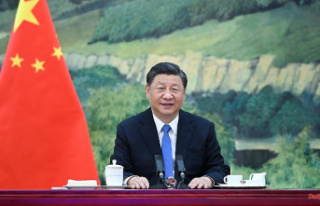 No "change through trade": China and the...