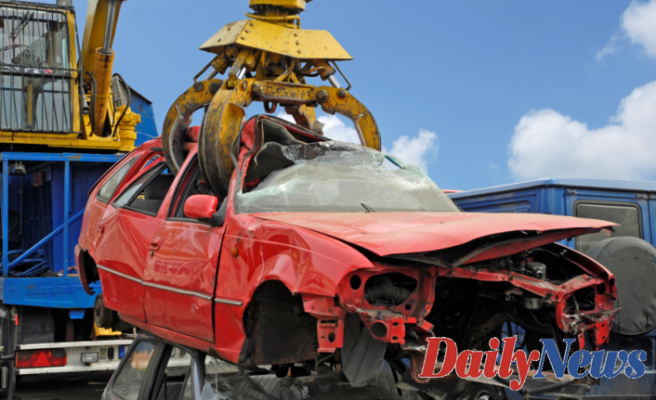 You’ve been driving your Toyota Camry for almost ten years, but now it’s time to say goodbye. As the tow truck pulls into your driveway, tears fill your eyes as you wonder what next for your old four-wheeled friend. The truth is that while this may be the end of the road for you and your car, many things could happen to it from this point on.

It can take anywhere from 15 to 18 hours to build a roadworthy vehicle. However, when placed into a “crusher,” a car can be reduced to a pile of scrap metal within a matter of seconds.

Each car crusher (sometimes referred to as “shredders”) use thousands of horsepower to compress cars. From there, the metal in these vehicles is either melted down, removed manually from the heap, or flattened.

Cars Are Usually Recycled at This Point

While you may shudder at the idea of your car being reduced to a two-foot pile of metal, glass, and plastic, this is actually an environmentally-friendly way of reusing old material.

According to Popular Mechanics, more than 95% of your car’s metals are reusable. In fact, recycling car parts is one of the most recycled consumer products in the world, followed by paper, cardboard, and glass.

Very few cars are completely empty once they are placed inside of the crusher. Popular Mechanics says that upon being crushed, each car contains about $1.65 in spare change. Junkyard mechanics do not just keep the change though; instead, they take these coins and sell them back to the U.S. Mint for a fee.

Many Cars Are Sold at Auction

There are typically three reasons why a car might get sold at auction:

What might be a unroadworthy car to you could be a fun weekend project for someone else. Additionally, many dealerships are not able to clear their stock. To recoup their losses, they may have an auction to refresh their inventory.

What Happens if My Car Is Sold at Auction?

If an auction house agrees to take your car, they will likely take a percentage of the sale. This percentage will depend on a variety of factors, but it will most likely be anywhere from 15 to 20 percent.

If you decide to sell your used car at auction, the proceedings may go differently than those listed here.

There Is a Buyer for Everything

You’d be surprised at what some people are willing to buy. Some people will buy a used car solely for the purpose of destroying it, either as part of a movie or another endeavor. Others will buy an entire car just for one single part. This is especially the case with older cars that have discontinued parts.

Do not assume that your car will not sell at auction. For every seller, there’s a buyer–even if it takes a while.

Everything is relative. What may be a clunker to you could be a teenager’s first car. Some people purposefully buy older, worn-out cars all the while knowing that they will get a year or two out of it.

If you are unsure whether your car is at the end of its life, ask yourself the following:

Is My Car Totaled?

Many people hear this term and picture a pile of steaming rubble on the side of the road. Instead, according to Investopedia, a totaled car is one where it costs more to fix it than its actually worth.

So, if you have a 2010 Ford Escape that needs $3,000 worth of repairs, this would be considered totaled since its resell value is only about $2,500 (per Kelley Blue Book).

In addition to the cost of repairs, some factors that could determine whether your car is totaled include:

A car’s maximum life is roughly 15 years. If you have owned your car for a significant period, it may be time to consider trading up.

Ultimately, what happens to your car at the end of its life depends on a lot of things. With some love and care, some cars are able to return to the road with no problems. However, some are just gone beyond the point of no return.

The great thing about cars that meet the end of their lives is that for the most part, they can be scrapped for parts. Not only can this reduce our collective carbon footprint, but it can also keep our cars alive in one way or another.