According to the police, a young man in Hanau insulted a patrol - during a subsequent check he kicked around.

According to the police, a young man in Hanau insulted a patrol - during a subsequent check he kicked around. As a result, an officer has to go to the hospital. Several patrol cars arrive to calm the charged mood.

A police officer was seriously injured during an operation with an angry crowd in downtown Hanau. The incident on Thursday evening was preceded by the discovery of drugs in a 31-year-old, the police said. Shortly thereafter, an 18-year-old suddenly insulted a police patrol and threatened him with death - presumably in connection with the drug crime.

When the officials wanted to record the personal details of the 18-year-old, he kicked around. A 28-year-old police officer had to be taken to the hospital with a shoulder injury, the police said. In the meantime, around 40 young men had gathered at the scene, from whose ranks there were said to have been numerous insults against the officials. The charged situation could only be calmed down with the help of further patrols. The 18-year-old has to face criminal charges on suspicion of assault, insult and threats. 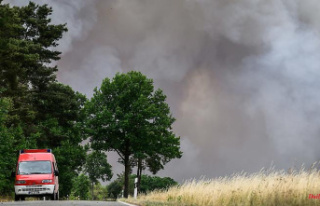