They are simply part of the garden in Germany: lawn sprinklers. 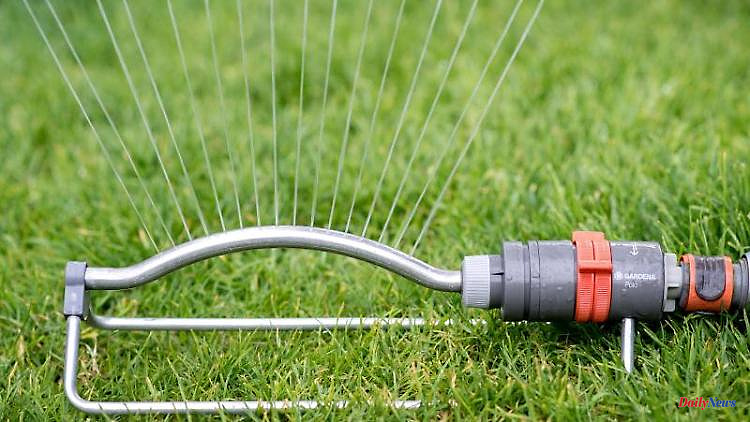 They are simply part of the garden in Germany: lawn sprinklers. But isn't that wasting water? Should garden owners let the greens turn brown? Water is not yet scarce, but there are some indications that it is.

On clear summer evenings they can be seen everywhere in German gardens: lawn sprinklers that spray tap water over the garden and make children jumping through them happy. But is that actually still up-to-date? The forest in Brandenburg has just burned for days and in the coming days the next heat wave will roll across the country. Can we still afford to only use drinking water for the beautiful greenery?

The short answer: Yes, currently usually yes. Because Germany does not yet have a nationwide water problem. The long answer: No, because the situation is more complicated. Private households are supplied with 60 to 100 percent from groundwater. But the levels have been falling for years. So it makes sense to save water. "This is a sensible precautionary measure so that there will still be enough water tomorrow," says Jörg Rechenberg from the Federal Environment Agency (UBA) ntv.de. One should take it seriously if one's own city or municipality prohibits watering at certain times. This means that there is already a water shortage there. In Brandenburg this is already the case to some extent. The water association Strausberg-Erkner capped the consumption of new customers to 105 liters per person.

At first glance, however, Germany is far from suffering from a water shortage. It is assumed that 188 billion cubic meters of water are available every year and only 24 billion are needed. That's 12.8 percent, Rechenberg calculates. According to the water supply expert, one only speaks of "water stress" when consumption reaches 20 percent. The good news is that total water consumption in Germany has fallen by almost half since 1991. In addition, more than half, 52.9 percent, of the water is used as cooling water for nuclear and coal-fired power plants. This consumption should cease in the medium term if the reactors go offline as announced.

So everything is okay? Not quite, because the numbers are misleading - first of all, the total supply of 188 billion cubic meters comes from the 30-year average, which was determined between 1961 and 1991. According to Rechenberg, the total amount of water since 2003 has been lower every year except 2007. In the dry year 2018 it was only 119 billion cubic meters. So Germany is closer to "water stress" than the official figures suggest. The cooling water for the power plants also usually comes from rivers and is also returned there. If the cooling is no longer required, it is of little use to the groundwater. Industry and mining account for almost a quarter of Germany's water consumption, of which "only" about a third is covered by groundwater.

However, groundwater is particularly important for nature, for forests and wetlands - and for consumers. The water levels have been falling for years due to a lack of or shifting rainfall. They shift towards winter and come down more and more often as heavy rain. The groundwater hardly benefits from this, because the water flows off superficially in a surge and only small parts seep away. In addition, the warmer it gets, the more private individuals consume - for showering, for the paddling pool and for the lawn sprinkler. How private individuals behave is therefore relevant. Overall, they account for 22 percent of German water consumption. "You can't think of quality and quantity separately," says Rechenberg. Because the existing underground water is often not usable because the nitrate load is too high - as a result of agricultural fertilization.

So is the lawn sprinkler an environmental sin or not? As is so often the case, the answer is: It depends. According to Rechenberg, you can conservatively use 18,000 to 30,000 liters of water a year just for the lawn - assuming an area of ​​100 square meters and a consumption of 15 to 25 liters per square meter and three months of blasting. At five months it is already up to 50,000 liters. For comparison: water consumption in Germany is around 47,000 liters per capita and year.

The capital, for example, shows the masses of water that come together. "In Berlin, water use is closely linked to weather forecasting," as Astrid Hackenesch-Rump from Berliner Wasserbetriebe tells ntv.de. When it rains, water consumption drops by around 100,000 cubic meters because people don't water their gardens. This is a considerable part of the capital's total consumption, which peaks at around 800,000 cubic meters. On Sunday, for example, there were 642,000 at a good 20 degrees.

The big question with lawn sprinkling is when to do it. "The best time to blast the lawn is early in the morning between four and six o'clock," says spokeswoman Hackenesch-Rump. "Then the ground and air are cool and only a little water evaporates." In addition, one should not use the lawn sprinkler for the bed, because the water then only reaches the surface. An irrigation system with a timer is more suitable. Then you don't have to get up so early.

UBA expert Rechenberg adds that it is better to irrigate heavily once a week than little every day. Because then the roots of the lawn grow deeper, instead of just staying on the surface where the water arrives. If the lawn is watered during the day, sometimes more water evaporates than reaches the soil and the plants. He advocates letting the lawn turn brown. "He'll be back." It makes more sense to water trees and bushes. Hackenesch-Rump from Berliner Wasserbetriebe also asks whether it really always has to be the English pitch. "Can't I instead see which plants do well with greater heat? Lavender, for example, works great." 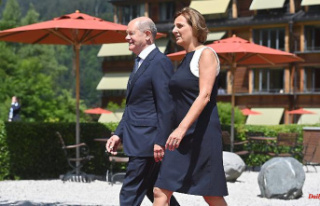 Wellness villa in the Allgäu: This is where Scholz...