This review contains spoilers about episode 5 of Loki. 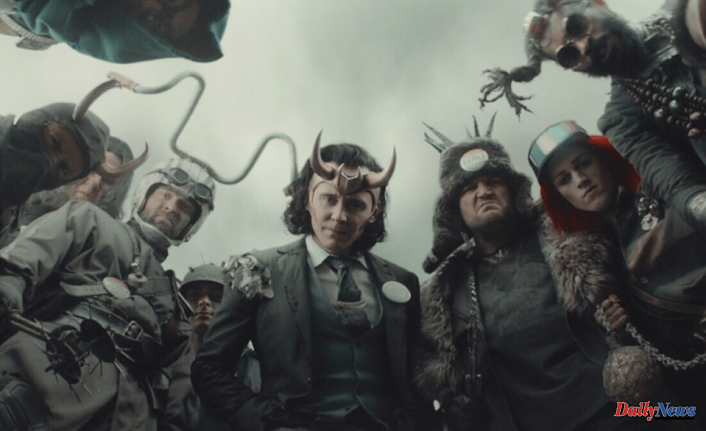 "WandaVision has its fair share of problems holistically, but what we get through the experience is unparalleled to any Marvel has ever done before," I stated this back in February, during the height of WandaVision’s excitement. All of us were eagerly anticipating the final. And did it deliver? To show my feelings about the WandaVision finale, I have attached a song. It's July now, nearly five months after the WandaVision finale. Loki is the rage. Do we feel like we are stepping into old ground with Loki now, that the finish line has been in sight?

We begin the episode exactly where we left it in the previous episode. Loki was vaporized, or so we thought. We are now in a world/void inhabited Loki's. We get more character motivations and development, just like any good TV episode. You're not here to watch a recap. A wise man once said Where's the freakin’ gabagool? and I'm here for that.

Because I have many, I will start with my complaints. It does a great job of wasting time for a show that revolves around it. It is understandable that when you introduce new characters, you need to take the time to breathe them in and meditate on them. The show's creators took a lot of time to get to know these characters. The first two episodes are strong and we go through a lot of information. The Infinity Stones (yeah, the thing that drove 23 movies? being completely worthless? What is the deal?

Given all this information, I would have no problem getting the WandaVision length. We spent a lot time creating anticipation in WandaVision. We got a full train running YEEHAW with Loki. It introduced us all to the Loki's so I would have no problem taking a few episodes to cook in this world. These Loki's offer a unique way to discover the world. We shouldn't be denied this world by Richard E. Grant and the Loki alligator.

I am aware that the length of episodes is related to how much cheddar Disney will shell. Sir Mouse, if you are reading this, please make these experimental and more creative shows more money. My favorite Marvel project is Doctor Strange. I know that when we get to the stranger side of superhero mumbo-jumbo, I'm all for it. WandaVision provided us with little bits of strangeness, but all were explained. This causes us to lose the magic we experienced in the early episodes of WandaVision. Ironic considering that the show is about magic and witches.

Loki gives us a lot of information. We must process this information at an incredible rate, just like Loki. Each episode is unique. One episode ends with a supermarket crashing to its death. The last episode ended in a darkened chamber inhabited only by robot puppets. This episode sees Owen Wilson reprising his role as Eli Cash in The Royal Tenenbaums. This episode almost feels like a Marvel adaptation of The Legend of Zelda : Breath of the Wild. The show still maintains its singular feel despite all this absurdity.

This episode of Loki takes care of some of the business that I was afraid we would lose in the final. Episode 3 was the last episode. I was afraid that we would fall for the Marvel formula. WHAM, BAM! *information dump* CGI, KERPLOW. Six episodes were produced, with one slow-burn. Although we allowed Sylvie to meditate with Loki, we still needed progress. I am confident that any doubts are gone now that we are at the point we are. This episode was able to cut through the excess filler and set the scene for a wild finale. While I'm concerned that the true antagonist has not yet revealed themselves, it is something we have plenty of time to do.

My personal opinion is that the Loki experience was miles superior to the WandaVision experience. Both shows are executed well, so I don't want to criticize anyone. Loki is more my speed. We will reach the final, and then we'll get some WHAM BAM, THANK YOU MA’AM. Then, there will be something to enjoy until the next Marvel movie. Each episode was an entertaining and funny journey. I am glad that we were able take it. Marvel, we want the good stuff. Give us the weirdo stuff.

1 In a documentary trailer, Val Kilmer discusses how... 2 How to Improve Your Business and Bring About Change 3 Rise in Popularity of Online Gaming and Casinos during... 4 Sebastian Eubank has died: The son of boxing legend... 5 Maura Higgins takes her FIRST picture with Giovanni... 6 Peterborough flooding: Live updates from the floods... 7 EastEnders spoilers - Ben Mitchell finds and kills... 8 Life/Sex: Who is Billie Connelly in Sex/Life? Meet... 9 All Blacks vs Fiji - Ian Foster will receive some... 10 Heather Morris, star of 'Glee,' honors Naya... In a documentary trailer, Val Kilmer discusses how...