One of the scenes in ESPN's documentary "30 for 30," which follows Maya Moore's struggle for justice, shows her lying on the couch. She is singing angelic songs and playing the guitar, which you wouldn't expect from a four time WNBA champion. This is the start of a 75-minute deep dive into Moore's personal life. It focuses on Moore's ongoing sabbatical form the game in order to help overturn the wrongfully conviction of Jonathan Irons, a close friend and now her husband. Irons was in prison for 23 years before being released in the summer 2020.

The film, which debuted Tuesday, is now available on ESPN+. It documents Moore's meteoric rise as a basketball star and how his initial introduction to Irons turned into a call to prove his talent. What is the underlying theme of both Moore's story and Irons? Above all, champion humanity.

Irons met Moore just before she began her UConn career in 2007. For a 1998 assault and burglary, he was serving a 50 year sentence in prison. Irons has maintained his innocence and there is no DNA, fingerprint, or blood evidence linking him with the crime scene.

1 Announcement: Tyron Woodley vs. Jake Paul for August... 2 Recap: Qatar 3, Panama 3 3 Jada Pinkett Smith, inspired by her daughter, debuts... 4 "Victoria's Secret Karen" freaks out... 5 NFL coaches and executives ranked Lamar Jackson as... 6 Arteta: Smith Rowe will "100%" stay at Arsenal,... 7 Ashley Graham, model, is pregnant with her second... 8 MLB All-Star Game uniforms are not drawing All-Star... 9 Hank Aaron honored prior to the baseball All-Star... 10 What Is the Best Exchange to Cash out Bitcoin? 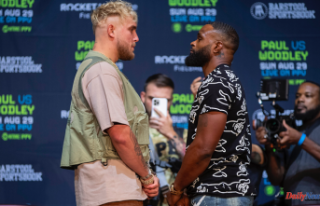