Thousands of people bid farewell to the late ex-Pope Benedict XVI in Rome. 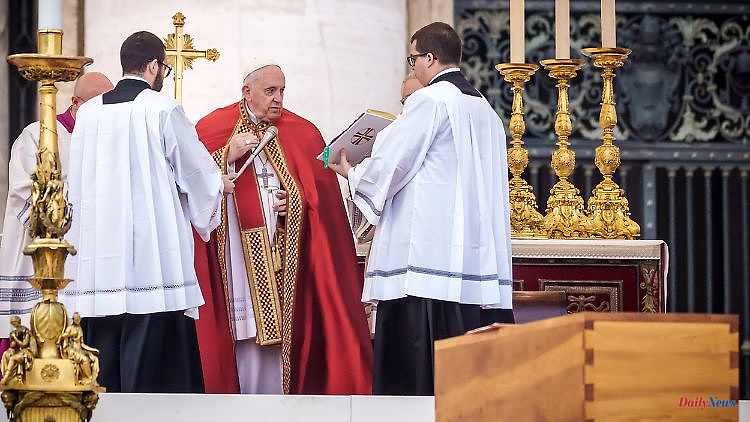 Thousands of people bid farewell to the late ex-Pope Benedict XVI in Rome. The speech by Pope Francis is a special feature: it is the first time that an incumbent pope has presided over the funeral service for his successor. But his words are rather general.

In his homily during the funeral mass for Benedict XVI, Pope Francis made little direct reference to its predecessor. The pontiff spoke primarily of devotion to God and trust in the Lord. Only at the very end did the Argentine say in front of the wooden coffin of the Pope Emeritus: "Benedict, you faithful friend of the bridegroom, may your joy be complete when you finally and forever hear his voice!" Jesus is often referred to as the bridegroom in the Catholic Church.

Francis had previously said in front of many guests and tens of thousands of believers in St. Peter's Square in Rome: "We too, who are firmly connected to the last words of the Lord and the testimony that shaped his life, want to follow in his footsteps as an ecclesial community and entrust our brother into the hands of the Father: may these hands of mercy find his lamp burning with the oil of the gospel, which he spread and witnessed during his life."

The Pope had already praised Benedict's devotion to the faith in the past few days. For a pope to preside over his predecessor's requiem is historical.

A large number of people gathered in St. Peter's Square for the funeral service. Before the requiem for the deceased pope emeritus, his longtime confidante and private secretary Georg Gänswein said goodbye with a special gesture. The Archbishop bent over the coffin in St. Peter's Square and kissed it.

Nobody has been closer to Benedict than Gänswein in recent years. In 2012 he was appointed curial archbishop by his mentor - that is, a bishop with a function in the Vatican but without a diocese - after he had been Benedict's assistant and secretary for almost ten years. The two were already working together when Benedict was still Prefect of the Congregation for the Doctrine of the Faith under his birth name Joseph Ratzinger.

Federal President Frank-Walter Steinmeier and Federal Chancellor Olaf Scholz, along with numerous other German politicians, take part in the funeral service for the first German Pope in 500 years. Benedict will then be buried in the original tomb of Pope John Paul II in the crypt under St. Peter's Basilica.

Around 130 cardinals also attended the funeral mass. Among them were the German cardinals Reinhard Marx, Rainer Maria Woelki and Gerhard Ludwig Müller. According to the Italian news agency Ansa, 300 bishops were among the guests.

Pope Benedict XVI was not, from Cardinal Walter Kasper's point of view, a stubborn dogmatist. "In the personal meeting one saw: He is not a die-hard or anything," says the retired cardinal of the Curia before the requiem for the deceased ex-pope, which Kasper should celebrate. Joseph Ratzinger was a "friendly, hopeful person".

Just a few weeks before his death, Kasper received a letter from him, signed on December 10th. "He was ultimately very at peace with himself and with the church, with God." Kasper Ratzinger has known for 60 years, "two-thirds of my lifetime," said the 89-year-old. "They were very good conversations and encounters and I have to say I miss them now, these conversations. Maybe we can continue them in heaven."

The coffin containing the body of Benedict XVI. was brought to St. Peter's Square by 12 porters. The emeritus pontiff was laid in a wooden coffin for later burial. The crowd applauded as the coffin arrived. Benedict, whose real name is Joseph Ratzinger, died last Saturday at the Vatican at the age of 95. He resigned from the papacy in 2013.

1 Society takes stock of the year: 187 Lotto millionaires... 2 Cheerful to impressive: what if Michel Majerus were... 3 Mama Sharon blurted it out: Kelly Osbourne gave birth... 4 "I pray every day": Dieter Bohlen gives... 5 "Silence becomes treason": Prince Harry... 6 Labor law question: Can the boss dictate how to get... 7 Quite understandable: termination also because of... 8 North Rhine-Westphalia: Land missed new target of... 9 Saxony: Two children hit by the car and seriously... 10 Baden-Württemberg: The crisis year also has consequences... 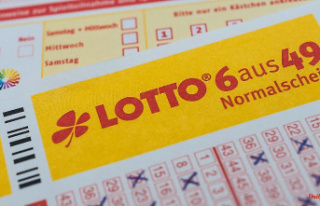