Looted art from the colonial era: Benin bronzes to be returned to Nigeria

Around 1130 Benin bronzes are currently in Germany. 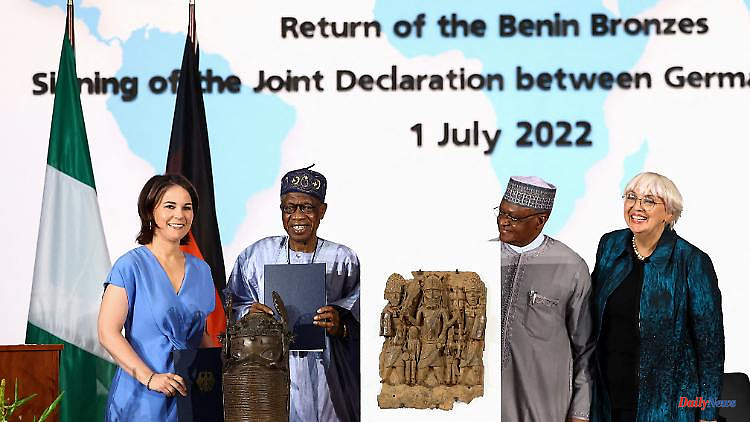 Around 1130 Benin bronzes are currently in Germany. After 120 years, however, the stolen art treasures are now to be returned to Nigeria. Some of the objects could still be admired in German museums in the future - but then as loans.

"The Benin Bronzes are coming home!" Foreign Minister Annalena Baerbock summarized in one sentence what German museums and those responsible for them have prevented for decades. In Berlin, Germany and Nigeria cleared the way for the return of art objects stolen during the colonial period. With a "joint declaration on the return of the Benin bronzes", a framework was created in Berlin for transferring ownership of the valuable pieces from German museums to Nigeria.

Baerbock, Minister of State for Culture Claudia Roth, Nigerian Minister of Culture Lai Mohammed and Minister of State for Foreign Affairs Zubairo Dada signed the four-page, twelve-point agreement, which provides for an "unconditional return." At the same time, both sides want "that the German public museums and institutions can continue to exhibit the Benin bronzes as loans".

Baerbock referred to the history of colonialism. "We mustn't forget that this is also part of German history," she said. "It was wrong to take away the bronzes, it was wrong to keep them for 120 years." This is a start to correct mistakes. At the same time, she referred to collaborations for exhibitions in the future. "The bronzes can go on holiday in German museums in the future."

Roth spoke of a day of hope, humanity and friendship. "Germany is in the process of changing its blindness to its own colonial past," she said. Now it is "forward to a future in which justice could heal the wounds of the past". Roth spoke of a new era of cooperation between museums and those responsible. "Culture makes a common future possible."

Nigeria's culture minister Lai Mohammed said he was "very happy that Germany is making this possible". He also thanked the museums and the responsible sponsors. "Through this action, Germany has taken the lead in correcting past mistakes." Zubairo Dada, Nigeria's Minister of State for Foreign Affairs, spoke of the "beginning of a new era in culture and diplomacy". The move will have a positive impact on mutual understanding between both countries and cultures.

Two bronzes from Berlin holdings were handed over immediately afterwards. Around 1130 of the artistic pieces from the palace of the former Kingdom of Benin, which today belongs to Nigeria as the Edo State, can be found in around 20 German museums. Most of the objects, which are mostly made of bronze, but also of ivory and wood, come from the British looting of 1897. After the Ethnological Museum in Berlin, the most extensive collections are in the Linden Museum in Stuttgart, the Museum am Rothenbaum ( Hamburg), the Rautenstrauch-Joest-Museum (Cologne) and the Dresden/Leipzig Museum of Ethnology. So far, these five houses have been involved in the planned transfer of ownership and have already taken steps to return the art objects.

The joint declaration recognizes the "great artistic, historical and contemporary value of these artifacts" to the people of Nigeria "as well as their universal importance to humanity". In addition, it is necessary "not only to achieve the return of the objects, but also to achieve a new understanding of cultural cooperation between Nigeria and Germany". Handover agreements are now to be signed between Nigeria's National Commission for Museums and Monuments and the German museums for the transfer of ownership, the "return of the objects to Nigeria from 2022" and provisions on loans and exhibitions. Both sides also want to support the construction of museum facilities in Benin City.

The President of the Prussian Cultural Heritage Foundation, Hermann Parzinger, sees a changed attitude towards returns. "I think there is a rethinking in our entire society, from politics to museums, no part of society is exempt from this," said Parzinger in the ZDF "Morgenmagazin". The 34 years of German colonial history were pushed aside and also overshadowed by the Holocaust and other catastrophes of the 20th century. The debate about the Humboldt Forum in Berlin, where Benin bronzes are also to be shown with the last partial opening on September 17 after consultation with Nigeria, made it increasingly clear "that this topic of our history has to be addressed, also in schools, in all areas of public life," he said.

1 WHO urges urgent action in Europe amid a spike in... 2 Putin's response to mocking world leaders at... 3 About 10% of flights canceled this Thursday due to... 4 Hesse: Police arrested three men after a knife attack 5 CGT deemed the 3.5% increase in salary for civil servants... 6 North Rhine-Westphalia: Six-year-old runs on the street:... 7 "Cahiers noirs", “Decision to Leave”,... 8 Archive of the "Obs": The Paul Touvier scandal,... 9 Ardeche | Isere. Two days of works closed the bridge... 10 Basketball/NBA. Utah trades Rudy Gobert to Minnesota 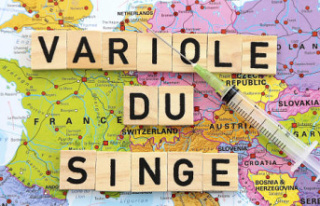 WHO urges urgent action in Europe amid a spike in...