Only the coldest of cold opens for Nat Love. Cold opens are a bold move in any medium. When a movie or TV show drops the audience into its world without so much as a "here's the title," it speaks to a confidence that whatever's about to happen on screen is sufficient enough to immerse, intrigue, and otherwise hook them. Netflix's throwback western extravaganza The Harder They Fall opens as cold as they come but goes one step beyond the an intriguing tease to tell a complete origin story with two scenes, scarce dialogue, and a truly explosive title card that will be hard for any filmmaker to beat going forward.

The cold open begins with a father, mother, and son about to eat dinner on a suspiciously quiet evening. The strange tension in the dusty air is resolved when a mysterious gunslinger arrives at their house and wordlessly threatens the family with a pair of golden revolvers. The Harder They Fall then does what western movies do and gives the young son a violent reason to swear vengeance on the gunslinger and his partner. But then it skips ahead to "some time later."

The vagueness of "some time later" is intentional, as two allegedly new adult characters interact in a Texas church. As the scene progresses, it's clear that the characters are the boy and the gunslinger's partner, and only one of them is leaving that church alive. Considering Jonathan Majors plays the adult Nat Love, who is the main character of this movie, which one it is becomes obvious. Once Nat has taken his revenge, he declines not to claim the man's five thousand dollar bounty; when questioned as to why he won't take the body to the sheriff himself, he smiles and says three words that make The Harder They Fall impossible to stop watching: "I'm worth ten."
That final line, "I'm worth ten," invites the audience to fill in the blanks between the origin story and "some time later" with whatever their imaginations can invent. At that point, it doesn't matter if The Harder They Fall reveals what actually happened later on because the completeness of Nat's arc hints at an entirely different movie that took place in the blink between the two scenes. It helps that Jonathan Majors says the line with all the compounded swagger of a dozen outlaw archetypes and struts away, black-hatted and smirking as the opening beats of the film's first musical cue begin to play. It's as perfect a moment as eight minutes and thirty seconds of introduction can earn.

The full opening credits roll after that moment and build the hype by introducing the cast of superstars who will be joining Majors once the story gets going (Regina King, Idris Elba, LaKeith Stanfield, Zazie Beetz, and way more) — but those aren't technically the opening titles. The title initially shows up word-by-word as Nat shoots four bullets into the gunslinger's partner, in a bright and kinetic transition that also functions as a "reveal" for Nat's mysterious proficiency with his weapons. They punctuate the questions raised by the gap between Nat's childhood and right now, wherein a sweet, traumatized boy turned into a walking bounty worth twice what a murderer's accomplice goes for.
By the time Jay-Z's rap comes in over the beat of the full credits, The Harder They Fall has told more of a story than some movies get to in their entire runtime while fully drawing the audience to the dusty, violent world Nat Love inhabits. From there, it's off to the races with a stylish, bloody western that doesn't waste a second of the cold open's massive head start. 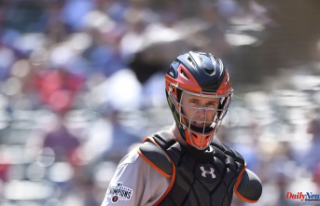 Buster Posey is retiring, per the report