Russian President Vladimir Putin directed his forces to not storm the last Ukrainian stronghold in the besieged port of Mariupol. Instead, he ordered his troops to block the Azovstal steel facility. Putin stated that it would not be possible to storm the facility with its network underground tunnels. According to the Russians, only a few thousand Ukrainian troops remained at the plant with its network of underground tunnels. The labyrinthine network of tunnels and bunkers covered an area of approximately 4 miles. Zelenskyy stated that about 1,000 civilians were also trapped.

The Ukrainian military claimed Wednesday that Russian forces attempted to storm the seaport.
Steel plant, according to Reuters news agency.

Sergei Shoigu (Russia's defense minister) said that the rest of the city was "liberated". This is a Russian term for areas in Ukraine that they have seized. Putin called it a "success".

Shoigu stated that the plant was "securely block."

The Russians would lose the right to declare victory in Mariupol if the plant is left in Ukrainian hands. This city has witnessed some of the most intense fighting in the war, and its capture has symbolic and strategic importance. It has been a focal point of international suffering. A definitive fall of the plant would remove Ukraine from a vital port and create a land bridge between Russia, the Crimean Peninsula and Ukraine, allowing Russian troops to move around in the Donbas.

One young mother who lives in the steel plant said that if it wasn't for the Ukrainian soldiers, there would be no food. CBS News' Chris Livesay reported that children in the plant were playing with empty food containers and couldn't wait for the grocery store.

Another woman stated that some children's teeth are beginning to rot due to lack of vitamin D.

Another mother asked for help. "And to those who started the war against us, I wish you could feel our pain on my skin and that your children can feel it too."

Although Ukrainian officials didn't comment on Putin’s comments, they earlier stated that four buses carrying civilians were able to flee the city following several failed attempts. There were thousands more in the city, which was reduced to a smokey ruin after a two-month siege that left it nearly deserted. Over 20,000 people were feared dead.

Iryna Vereshchuk, Ukraine's Deputy Prime Minster, stated that another attempt would be made to evacuate civilians from Mariupol on Thursday. However it was unclear how these latest comments would impact that.

Spain's Prime Minister Pedro Sanchez, and Denmark's Mette Fredericksen visited Kyiv to support the initiative. They were scheduled to meet President Volodymyr Zilenskyy. Zelenskyy warned that Russia was not abandoning its attempts to win at least some victory with a large-scale offensive.

Frederiksen (the Danish prime minister) stated in a statement that "the West stands together to support Ukraine's people."

The Kremlin claimed it had submitted a draft to end the war. Meanwhile, the West raced for Ukraine to get heavier weapons to stop the Russians' new push to take over the industrial east.

The Defense Ministry of Britain stated in an assessment that Russia wants to show significant success ahead of its annual May 9 Victory Day celebrations. He said that this could impact the speed and force with which they conduct operations during the period leading up to May 9 Victory Day.

The Kyiv Regional Police announced Thursday that nine bodies and two mass graves were found in Borodyanka, northwest from the capital, amid growing fears about the fate of civilians in Mariupol. These findings add to the thousands of civilians killed by Russian forces. They have been accused of mass abuses of Ukrainians.

Andriy Negotov, head of the Kyiv region police, stated that two women and a teenager were among those "civilians" who were killed by the Russian occupiers.

"I want you to know that these civilians are being shot at," Nebytov said. Nebytov stated that the Russian military intentionally shot civilians who didn't resist and didn't pose any threat. Some of the victims were also tortured.

Russia's first successful launch of an intercontinental ballistic missile type, the Sarmat, was reported amid rising tensions. Putin claimed that the Sarmat can defeat any missile defense system, and made those who are threatening Russia "think twice." Russian head of state aerospace agency called the launch of northern Russia's missile defense system "a gift to NATO."

The Pentagon called the test "routine" but said it wasn’t considered a threat.

According to Ukraine, Moscow continued its offensives in the east, seeking weak points within the Ukrainian defense lines. Russia claimed that it launched hundreds upon thousands of air and missile attacks against targets, including concentrations of vehicles and troops.

According to the Kremlin, the Kremlin wants the Donbas captured, which is a predominantly Russian-speaking region in the east that is home of heavy-equipment factories, coal mines, and metal plants. Putin would be able to seize the Donbas from the rest Ukraine, two months after his failed attempt to storm Kyiv.

According to the U.K. Defense Ministry, Russian forces were moving from Donbas staging areas toward Kramatorsk. Kramatorsk continues to be subjected to persistent rocket attacks.

According to the Luhansk governor, Russian forces now control 80% in his region. This is one of two regions that make up Donbas. The Kyiv government controlled 60% in the Luhansk area before Russia invaded it on February 24.

Gov. Serhiy Haidai stated that the Russians have now threatened the cities of Rubizhne, Popasna and Kreminna after they seize the small Russian city of Kreminna. He advised residents to evacuate as soon as possible.

Haidai stated that the occupiers only control a small portion of these cities and are unable to penetrate the centers.

Analysts believe the offensive in the East could turn into a war to attrition, as Russia faces Ukraine's most skilled, battle-hardened soldiers, who have been fighting pro-Moscow separatists for eight years in the Donbas.

Russia claimed it had presented Ukraine a draft document describing its demands to end the conflict. This was just days after Putin declared that the talks were over.

Dmitry Peskov, a Kremlin spokesperson, said that the ball was in the hands of the Ukrainians and that they are waiting for a reply. The draft was not disclosed by him and it wasn't clear when it was sent. It was also unclear if it offered any new information to the Ukrainians who made their demands last month.

Zelenskyy stated that he had never heard or seen the proposal. However, one of his top advisors claimed that the Ukrainian side was currently reviewing it.

Moscow has demanded Ukraine abandon any attempt to join NATO for years. In return for security assurances from other countries, Ukraine has stated that it will agree to this. The status of the Crimean Peninsula, which Moscow seized in 2014, as well as eastern Ukraine, where separatists have declared independent republics that are recognized by Russia, are other sources of tension.

Mykhailo podolyak, a Zelenskyy advisor, stated on Twitter that he and the other Ukrainian negotiators were prepared to hold negotiations without conditions in order to save lives of civilians and defenders trapped at Mariupol. Russia did not immediately respond.

Some residents in Kharkiv's eastern city have been living in basements for several weeks to protect themselves from Russian bombardment. They live without running water, gas, or electricity and collect rainwater to cook on open fires.

One neighborhood saw them seek safety in a basement school, where they used desks, tables, and chairs to make beds. More than 300 people slept there in the early days of war. But most have fled for safer places and only a handful remain.

Russia sent troops and equipment to the Donbas. Western countries rushed to increase the flow of military supplies and weapons to Kyiv to support this new phase of war. It was likely to include trench warfare, long-range artillery strikes, and tank battles on relatively open terrain.

According to a U.S. official, Joe Biden would announce plans to send more military assistance to Ukraine on Thursday. The official was not authorized to speak publicly and spoke under anonymity.

Zelenskyy stated that Ukraine's Western allies "come to understand us better" and added that Ukraine is now receiving new weapons shipments from the West "now", when Russia is trying "to step up its attacks in weeks or a month." 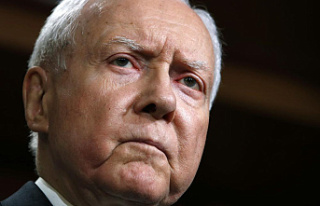