Corona relaxation: Finally back in the club

On the first day of the opening of clubs and discos in Berlin after a long corona break, there was a police operation due to the large crowd in front of a club On the first day of the opening of clubs and discos in Berlin after a long corona break, there was a police operation due to the large crowd in front of a club in the Kulturbrauerei in Berlin-Prenzlauer Berg. Several people had suffered panic attacks, a man had fainted, a woman had come to the hospital, the police said on Saturday. About 1,500 to 2,000 people had crowded in front of one of the clubs there on Friday evening at the courtyard of the Kulturbrauerei in Schönhauser Allee.

The police arrived with about 70 emergency personnel and cleared the yard. Clubs and discos have been allowed to reopen in Berlin since Friday. Convalescents and vaccinated people have to undergo additional testing if they want to get on the dance floor.

Large number of visitors in Oberndorf

In Austria, the end of almost all corona restrictions in front of a nightclub has led to tumultuous scenes. According to the police, a few hundred night owls gathered hours before midnight in front of the dance hall in Oberndorf near Salzburg. In the crush, some visitors had lost consciousness, the police reported further. Ten police officers had to intervene and had the club opened early to defuse the situation. An injured person had to be taken care of by the Red Cross. According to the information, many of the visitors were also from neighboring Bavaria. In the end, only half of those waiting could get into the discotheque. The night gastronomy has been closed in Austria for two years due to corona.

Read now for free for F+ two months and get access to all articles on FAZ.NET .

The opening of night clubs is one of the comprehensive easing measures that have come into force in Austria since Saturday. There are no access restrictions, no upper limit for events and no curfew anymore. There is still an FFP2 mask requirement in parts of the trade. In addition, the regulations in nursing homes and clinics are stricter. On top of that, the capital Vienna does not participate in all the opening steps. For example, it initially adheres to the 2G rule in the catering industry and an FFP2 mask requirement that applies almost everywhere.

The reason for the easing is the stable situation in the clinics. The seven-day incidence in Austria is around 2200 cases per 100,000 inhabitants, which is about twice as high as in Germany. 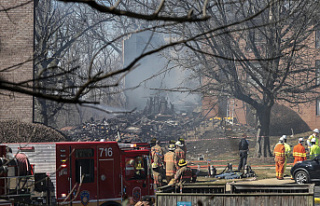 Officials say cut gas pipe was found in the basement...