He is close to Hofheim: Kill shot on the horse farm

It is a tedious first day of evidence. Image after image is running on the screens in the courtroom. On air views of the equestrian center photos of the site fr It is a tedious first day of evidence. Image after image is running on the screens in the courtroom. On air views of the equestrian center photos of the site from every imaginable angle to follow. The ways of access to the coupling, of a Bush around. Then close-UPS of the point at which the young woman, 22 years old, on 20. August 2019 was found. So strong out of the head bleeding, the resuscitation attempts of the rescue workers, nothing helped.

her family is sitting in the hall, as the district court shows those images. Mother, father and brother as a co-plaintiff in the Frankfurt public Prosecutor's office attached, and you want to be. Every word has been spoken since the time of the arraignment the day before, they have listened carefully. And now you see every picture shows the scene of the crime. The only thing you have to do. As the process involved to get the images of the dead young woman, the screens for the Public Park and in front of their Laptops, gather the family remains sitting.

The defendant on the other side of the courtroom is visible behind his breathing mask barely. He has more than 30 years older than the young woman, which led, over the years of breakups broken relationship with him. The pictures of the investigators out of his car, the house, close to Wiesbaden, lived where his children and home and construction trailer on a leased plot of land in the vicinity show a pure Chaos.

Everywhere, tools, clothes, papers, empty bottles and garbage piling up. Including a letter from his daughter, announcing, to the mother to escape. As the life circumstances of the accused looked like at this stage of the proceedings is still unclear. Of the fifty-six year old don't want to say. How he lived and how it came to be that the young woman was getting into a relationship with him, but would witnesses.

From the point of view of the Prosecutor of the case is clear: As the twenty-two year old separated once more from him, permanently this time, for he brought you. Because no one should have it, if he's not "must have", according to the indictment, lay in wait for her at the paddock and shot her in the head. The investigators compared the accused has to weigh these allegations, but his lawyer told the Public shortly after the arrest, that he had to do with the murder.

In this Version, he is apparently also in the pretrial detention remained. A police official told on Wednesday at the court of a monitored visit to the sister-in-law in the prison in which the accused have spoken about the files content, and the sister-in-law stated that he had no motive. The separation had not been for him, problematic. Mainly because the young woman had hinted at a possible new beginning.

1 Olivier Véran is ready to inject $ 6 billion to increase... 2 Switch-off Treaty: coal phaseout is to be decided... 3 Eintracht Frankfurt: DFB sports court confirmed Kostic-lock 4 Exhibition on Reiffenstein: backyards and doors 5 Midsummer's day: play with fire in the name of a preacher... 6 Court of appeal decides: process against Trumps the... 7 Fine up to 500 Euro: How Berlin against mask muffle's... 8 Aviation industry: Lufthansa and the flight attendants... 9 Pandemic in NRW: Laschet had no choice 10 Corona bursts: now Comes the tax on meat? 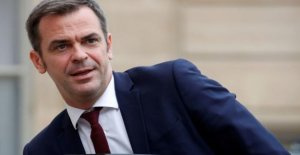 Olivier Véran is ready to inject $ 6 billion to increase...