The hiking tip: High on the sky swing

Here they all came by. Across the Rhine-Main area ran the High Road, over which for thousands of years whole crowds of peoples and armies, pilgrims, merchants a 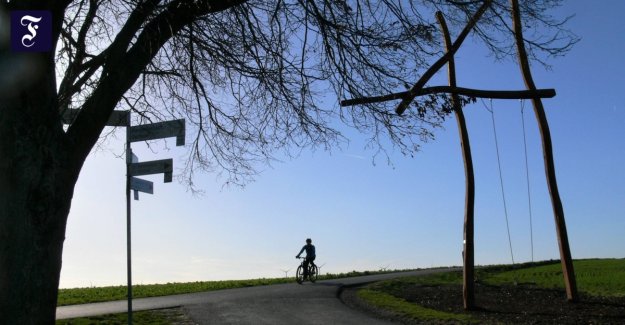 Here they all came by. Across the Rhine-Main area ran the High Road, over which for thousands of years whole crowds of peoples and armies, pilgrims, merchants and crowned heads moved, which earned the nickname Via regia to the long-distance path connecting Western and Eastern Europe at the end. Only with the increase in the importance of the cities and corresponding ramifications in the High Middle Ages did the royal route, which mainly ran on flood-free heights, receive competition and passed to the respective national authorities. Thanks to the "road and stacking compulsion", a pleasing source of constantly bubbling revenue.

These former lifelines would almost have been forgotten if they had not been discovered since the nineties as a symbol of Europe growing together. Of course, not for regular traffic, but rather routes developed into cycling and hiking trails, accompanied by various installations and information. As "Cultural Routes of the Council of Europe" from Spain to Latvia, they were awarded the higher orders of the 47-state organization in 2005. In the Rhine-Main area, significant preparatory work had already been carried out as part of the large-scale regional park route. Now, the pattern of historical (visual) references on the 38-kilometer section between Frankfurt-Bergen and Büdingen has been supplemented by further "stopping points". For example, a wooden van near Schöneck recalls the importance of the Hohe Straße as a trade route, while the "Himmelsschaukel" at Bruchköbel-Butterstadt in the eastern Wetterau corresponds to the spiritual sphere.

Numerous monasteries in their catchment area offered pilgrims accommodation and spiritual care. There Antoniter and the Johanniter Commandery in Rüdigheim, which had been in existence since 1257, performed such tasks. This is evidenced by the main building, which is still used today as a Protestant community center and dates back to the Romanesque period, as well as the partly neo-Gothic church. Recently completely renovated, the effect becomes even more noticeable, with an extended window track and pointed roof rider to increase the portal side visible from afar.

The Johanniter Commandery of Rüdigheim was founded in 1257. : Picture: Thomas Klein

In general, the region captured a remarkable spirit of optimism. Marköbel, for example, which once had to pass all traffic, has dressed up as if a ruler with a large entourage was expected, who enters through the unchanged lower gate and intends to spend the night in the half-timbered town hall of 1687, which is decorated and oriented towards the "street". In the meantime, almost all the buildings in wood have been exposed according to his model, the partially preserved city walls have also been renovated and the dimensions of a Roman fort, over which Marköbel grew, have been identified. At least the outlines of the spa of the 500-strong military camp are embedded in the parish church. It had no less task than to secure the Limes crossing to the High Road.

When arriving by bus, get off at the Untertor stop; it is best to park in one of the side streets of the newer part. The main street is aimed at the former half-timbered town hall, turns sharply left and then right in front of it; to the left below it is the parish church (with a beautiful double gallery). Here you can walk straight ahead to the edge of the village and turn right into the footpath / cycle path or up to the - freshly restored – Obertor and a hundred meters further in the Roßdorfer Straße to the said Randweg.

As a greeting, a magnificent group of lime trees welcomes us there, at the entrance of the Hohe Straße as part of the regional Park route. The marking, a red, double-divided triangle, soon leads into fields, but after the right turn again just short of a country road, then on the left in an open corridor towards the village of Hirzbach. His pride and joy is the elaborately restored gem of an (Antonite) chapel from the 12th and 13th centuries: tower-less and almost windowless, it hardly stands out from the neighboring buildings.

1 Resistance: Ayax's dart to Vox voters who go to their... 2 Las Vegas off-duty police officer is accused of robbing... 3 TikTok users can now post videos that are up to 10... 4 Children aged 5-11 may not be protected by the Pfizer... 5 California, Oregon, and Washington announce the end... 6 On the rocks: Governors ban Russian vodka sale in... 7 Derek Jeter, Miami Marlins CEO and shareholder, steps... 8 Estee Lauder executive fired after posting racist... 9 As Russia intensifies its assault, heavy shelling... 10 Police say that a woman was smeared in human feces... Resistance: Ayax's dart to Vox voters who go to their...