The witness does not need to look in the direction of the man in the red T-Shirt. "Do you know him?" the presiding judge asks. "Yes." "Who is that?" "Abu The witness does not need to look in the direction of the man in the red T-Shirt. "Do you know him?" the presiding judge asks. "Yes." "Who is that?" "Abu Muawia." Even later, when the Chairman asks you again and asks you to look carefully, it stays there: He is there. The murderer of their daughter. The man to recognize the witness as Abu Muawia says, is Taha Al-J. He is the Iraqis and the U.S. attorney's office accused as IS-trailer 2015 the witness and their five-year-old daughter at a slave market and bought.

One day, he should have the small jesidische girl to the penalty of the scorching sun on a window, chained until they died of thirst. Al-J. is the husband of the German IS a supporter of Jennifer W., you will be made in respect of the same events for months of the process at the higher regional court of Munich. The counterpart in Frankfurt has special significance: For the first Time in front of a law court, a representative of the terrorist organization could be condemned on behalf of the stated goal IS to destroy the people of the Yazidis.

The witness, who will appear on Friday for the first Time before the court, is a key witness. 48 years old, a young voice, but a face and a bent body, where you look at what they had to suffer. When she speaks of her daughter, not called the jesidischen name. You referred to it as the "Rania" – so the slave to the named holder of the five-year-old, because her real Name is that of a disbeliever. In the head of the mother shapes the. It is a small wonder, then, that the investigators came to your statement. Randomly 2018 heard a staff member of the organization "Yazda" that, in Germany, an indictment was charged in the death of a girl in the sun. She noticed that she had only told recently in Iraq, a woman this story. The lawyers of the organization registered with the office of the attorney General.

no, the feet hung in the air

for Many days the witness has been told since your time IS and the death of the daughter. She's been by the investigators to be heard. In the process against Jennifer W. she had to appear eleven times, until all questions were answered. And now Frankfurt. The court has scheduled three days for the hearing. Whether that's enough, is not in sight. That questioning is uncomfortable and complicated as it was in Munich, is. On Friday, the judges ask for the Details that bring the witness to cry. How exactly is Abu Muawia has tied the girl to the window? The mother makes it with your hands. Could you stand yourself? No, the feet hung in the air. How long she hung there? More than a half hour. Many of the questions does not understand the witness right off the bat. Tedious the Chairman feels its way with the help of the interpreter. He must know, in the end, it comes down to Details. For example, if Abu Muawia wanted to give the baby water after he had unchained; the witness it presents. Or, whether the child lived there, how stiff the body is, how tense the jaw was, what could be the sign of your death.

1 Crystal glasses, silverware, linens... the treasures... 2 Eoin Colfer: I do not wish to rewrite the identical... 3 In Cremona, the violin makers are struggling for their... 4 In a cinema in paris, ultimate preparations prior... 5 Frankfurt, Europe-Out: No reason to Fret for the Eintracht 6 Sharp criticism of formula 1: Mercedes Star Lewis... 7 Football rights sold: German Bundesliga remains at... 8 General secretaries of the CDU and the SPD: Not a... 9 Elephant man, in the spotlight, to the reopening of... 10 Hospital : a rise in wages as of July, according to... 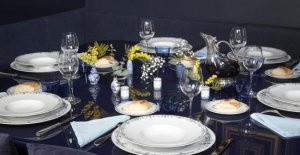