Dog walking service: When the dog is taken for a walk 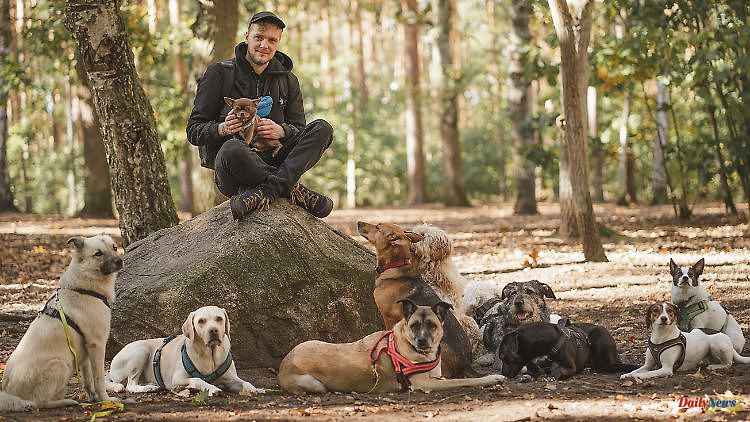 Bello and Co. should be allowed to run free at least three times a day. If you can't do that, you can let your dog walk. Dog sitters and dog walkers offer part-time care - especially in big cities. A tour with eleven four-legged friends.

Lizzy is four years old, waist high, and has shaggy blonde hair. She is the tenth dog going on a walk with us today. When Jan, the dog walker, comes, the poodle jumps at him excitedly. The black leash with which she holds her master tight: "It would be important for her to be back today by 1 p.m. at the latest." That's not a problem, says Jan and takes over the leash. Suddenly Lizzy seems nervous. On the few meters from the house entrance to the black van, she keeps turning to her master. Jan opens the rear door just a crack – dogs bark. He has to give Lizzy a little help getting into the trunk. Then he carefully closes the door. And suddenly all you can hear is golden autumn leaves rustling on a sunny morning in Berlin Prenzlauer Berg.

At the next house, the eleventh and last guest shows more courage when boarding, even if he is hardly bigger than a cat. He scurries past five large dogs in the vacant truck bed behind the door, who are sniffing him excitedly, and climbs into one of four cages. He's only been with the dog walking service Cookie for two weeks

When Jan reaches for the sun visor over his head, a tattered, light-blue festival wristband peeks out from under his sleeve. The only splash of color in his consistently black outfit - including Cappie. At breakneck speed, Jan maneuvers the eleven with exceptional composure through the crowded city of Berlin. The scented tree in the rear-view mirror is dancing. "I always put one in. Admittedly, this one is a bit older." It smells as if a school class full of teenagers forgot to open the window in the sports locker room. The four-legged friends lie innocently in the hold and let themselves be rocked by the rush-hour traffic.

Three of Jan's colleagues are standing in the parking lot at Grunewald with fully loaded vans and in between are more vans from other dog-sitting companies. "We have waiting lists for those who are interested." Jan smokes a cigarette with a colleague without a word. Then dog by dog ​​trudges into the fruity forest air. Jan puts a neon-colored, so-called drag line on five of them - you can quickly reach for them or step on them if the dog wants to run away. Then it starts.

But instead of storming into the forest immediately, the four-legged friends do their business first, and synchronously. Some dogs look for a quiet place. Others are not ashamed to make themselves big while running. The white poodle Loky looks particularly lost. He pees standing up - the right front leg is yellow. After leaving a minefield for forest walkers, the pack gradually revives. In the scenario, Jan is a kind of celestial body that is orbited by eleven fluffy satellites. He always faces forward and is the head of the pack. He doesn't look back at dogs running out of sight. Instead, he silently follows his path, and only a few seconds later there is a rustling in the thicket next to the path and a straggler walks away again. At least for now.

A particularly quiet dog is Mara - Jan's own dog, whom he rescued from the animal shelter. For her sake, Jan became a dog sitter in the first place. "I used to be a courier and could always take Mara with me in the hold," he explains. Then he was looking for something new: "A job where I leave Mara alone would never have been an option. She is very focused on me. I also want to spend time with her." The job as a dog sitter was made for him. Jan also wanted to become a dog trainer, but changed his mind after a first advanced course. "I had the wrong idea. Ultimately, you work more with the owner than with the animal. I'm too introverted for that. I can be authoritarian with dogs, but it's more difficult with people." And Jan needs authority for his gang of little rascals – especially for Pico. While the majority tends to gather around Jan in a disciplined manner, the medium-sized mongrel looks for squabbles. The white poodle Loki gets infected, plays and barks with him. Now the whole gang is restless, small groups separate. So Jan goes between the dogs, hisses at them and tells them to be quiet so that the pack stays together. "Of course the dogs want to have fun, but if I let them run free, I wouldn't get a few meters. That's why I try to keep the energy low. That also serves to control impulses." But Pico always seeks attention. Jan has to admonish him more and more seriously, grab his muzzle and finally he is the only dog ​​to keep him on a leash.

Other escapees remain the exception. Once, little Hudini slipped through a wooden fence in a kindergarten. Even before he can run to the children, Jan notices Hudini's intentions and lets him back through the garden gate into the forest. Even the white poodle Loky doesn't take the commitment of the group that seriously. Suddenly he runs away in the opposite direction. As fast as a greyhound, he disappears behind colorful autumn trees. "Loky!" Jan screams at first. Then he returns to his usual composure. "We just have to stay here and wait." And indeed; After two patient minutes, the snow-white racer sprints back towards the group.

Dog owners are too busy for small talk After a two-hour walk, the group returns to the van in the parking lot in front of the forest. When Jan sits down in the front seat, it's dead quiet again in the trunk. Only a dog snoring could break this silence after the hustle and bustle. Instead, the four-legged friends have found their way back to innocence. Only Chihuaha Sisu - the smallest dog of all - towers over the pack warningly. He sits in the top cage, faces the direction of travel and sways like a bobblehead with every turn.

Back in town, the first passengers stand impatiently on their front paws. Jan takes them back to their families in reverse order. First up is Suma. The owner beams when Suma jumps out of the trunk and walks the few meters to the front door with her. A "Well, how did Suma behave?" there is not any. "Some owners just open the apartment door, the dog slips out, and then they close the door again," says Jan.

Suddenly he looks at his cell phone: 1:09 p.m. Lizzy should have been back nine minutes ago. He sends a Whatsapp message and starts the engine. "I hate it when things don't go according to plan." Arriving at the agreed meeting point, Jan grabs the blond poodle and looks for the owner with hectic looks. Lizzy's owner appeases Jan's apology for being late and the temporary dog ​​daddy returns to the van relieved. Nine more dogs. The last one will be Mara, Jan's bitch. "Then we both have to take a nap after a hard day. You can then go for a run in the evening. But I try to keep my distance outside of my work and avoid too much dog action." But that doesn't seem to work out completely, because Jan is working on a second mainstay: professional dog photography. But first the next weekend trip out of the city is planned - of course with Mara. 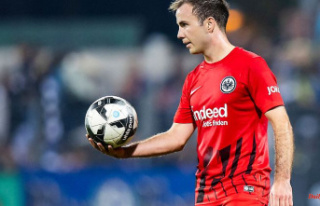 Hesse: Eintracht Frankfurt in the top game against...