Far outside is extremely popular, the variant excursion plus art in abandoned castles in Brandenburg has been luring the public out of the city for 27 years. 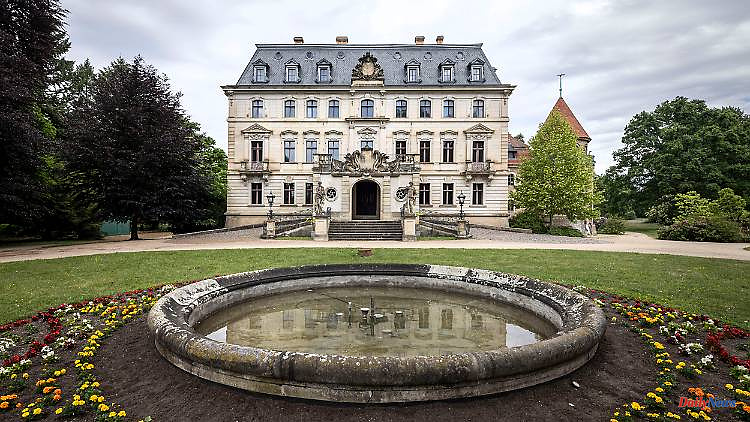 Far outside is extremely popular, the variant excursion plus art in abandoned castles in Brandenburg has been luring the public out of the city for 27 years. The ophthalmologist Arvid Boellert founded Rohkunstbau and gives ntv.de an insight into the work behind it.

Opening your eyes, for art in special places, that's what ophthalmologist Arvid Boellert is concerned about. He wants to surprise people in Brandenburg with contemporary art. It is about the history of the place and topics such as nature, tenderness or revolution. Arvid Boellert founded Rohkunstbau in 1994. Since then, the Rohkunstbau team has been filling castles threatened with decay or forgotten villas with sculptures, paintings, photos, video works or installations for a few weeks every summer. "Through the locations we set a contrast and actually a complement to art. Also because Rohkunstbau has existed for so long it is something special," he says to ntv.de.

For the 27th edition he discovered Altdöbern and got the key for the lock there. Altdöbern is located in southern Brandenburg, more precisely in the Spreewald and in Lusatia. Cottbus and Dresden are not far away and the town can be reached by train from Berlin in one and a half hours. Nature has been shaken by centuries of coal mining, and phasing out coal heralds a structural change. "It culminates in a historically valuable place with a remarkable castle. In 1750 it belonged to Carl Heinrich von Heineken, who was chief buyer of the Kupferstichkabinett in Dresden," says Boellert.

As an art-loving bon vivant, von Heineken filled the castle and the garden with sumptuous extravagances. After the Second World War, a Caritas children's and old people's home was housed in the complex. Due to a lack of state support and the desolate building fabric, the house was abandoned in 1974 and thus left to decay. In the meantime, it has been partially extensively renovated by the castles AG, but the building is rarely open to the public, but now for those interested in raw art construction. Artists will charge the baroque building with new energy until the end of October.

Big names are expertly mixed with lesser-known and new discoveries. How it works? "We are a classic artist project. That means artists like us and recommend us to others in the scene. I work with great women, without whom nothing would work. With Inka Thunecke, who is on the Rohkunstbau board, and our curator Heike Fuhlbrügge I have a fantastic crew," he emphasized in the Zoom conversation. "I hardly get involved. The professionals do the implementation and conception. I used to be able to support everything with manpower and time, but now also a little financially," he adds. "My job and my family are the big pillars in my life. But I try to coach and motivate here and there when I see a problem, because Rohkunstbau has to be financed anew every year."

Money is tight, mostly coming from the entrance fees. On the other hand, through donations from the Friends of Rohkunstbau e.V. association. In addition, there is “public funding – from the state of Brandenburg, sometimes from the EU and sometimes from special federal programs Underfunding of the independent art sector has been a problem for decades. That's why there are hardly any independent projects like ours that work sustainably anymore. We try to convince and inspire officials so that they support us within the scope of their legal possibilities," says the doctor. He is smart enough not to get bogged down in the details when telling stories. There are no loopholes. One can guess the multitude of bureaucratic regulations he encountered over the years for the temporary use of the dilapidated buildings.

It all started in his hometown of Groß Leuthen on the edge of the Spreewald. "There was this spirit of optimism and on the other hand there just wasn't much left. I'm not someone who thinks the GDR is great. On the contrary, right at the beginning we showed artists who were banned in the state." How did he come up with the idea for Rohkunstbau? "We were young, drove to Berlin at night. Some opened clubs there. But we wanted to do something here, do something. In Groß Leuthen there was this empty shell construction hall. Hence the name." The half-finished thing was built for the Workers' Festival in 1989, when it was still in the GDR. "Although everything was scarce back then, money and materials were scraped together. However, it was just a shell. The majority of the construction brigade suddenly disappeared to Hungary and there was nobody left who could build."

At some point, the summer show changed from this rough first location to empty castles or mansions. Made a name for himself beyond the borders of Europe. The constantly changing, always new challenges appeal to Arvid Boellert in his project, which has not remained a one-hit wonder. "Raw art construction is a lot of work, sometimes unpleasant and you don't get any thanks. In the beginning I was a student, I did everything myself. I now practice the profession that I studied. I developed my understanding of art from an oppositional concept of art. "By doing exhibitions I was able to learn how to deal with art. Being a curator or a museum director wasn't my career goal. 99.9 percent of what we do here in terms of organizational Sisyphus is because of the adversities in our country , not always nice."

Where does this unshakeable love for art come from? "When you start something out of love, it's like a hot love - it passes quickly. In making and performing, I gradually discovered my long-lasting love of art." Actually, he could only operate on eyes to help people see clearly. Instead of opening the eyes of an unfamiliar audience to something new through stimulating art. The private man Boellert is attracted to the mix. "The art public that usually travels to Art Basel comes together here with those who live in the region. They would otherwise never see each other in their lives," Arvid Boellert tries to explain his perseverance.

And even more important: the art festival founder has strong ties to his homeland. Brandenburg is the ideal location for him, also because it has something to do with a location that has become rare, he thinks. He's not nostalgic, though. "I was born in the Spreewald. It's just about two millionths my country. It doesn't belong to anyone who sits in the administration, it belongs to those who live there. We all pay taxes and the state has to ask itself whether what comes out at the end is of interest to the residents."

With its current location, Rohkunstbau is putting its finger in precisely this wound. Because "it's weird to say we'll renovate this castle and then conserve it." The logic behind it seems to be: if no one gets in, then nothing will break. "It's interesting for me to make something possible that isn't possible. So why not connect the building, like Heineken did back then, with artists of today? Altdöbern is as valuable in terms of art history and monument protection as castles in Dresden or Potsdam. That can cannot be sold to wealthy private individuals. It must be made publicly usable through our art."

Altdöbern Castle is not a public place, although it has been partially renovated and only a few crumbling walls can be found. Because: There were no current statics of the building, no building permit or a fire protection concept, Arvid Boellert had all of this created with his club. "It's nonsensical, but this is a construction site. The castle is only temporarily open thanks to the permits we obtained. However, we're not allowed to drive a nail into the wall." So the impressive art of Cindy Sherman or Rainer Fetting is presented on easels and ruin-like ceramics by Isa Melsheimer are presented on small pedestals. Carpets are laid to protect the parquet. The barrier tapes that appeared overnight in front of historical murals are accepted as necessary. What should be has to be.

"Over the many years we have proven ourselves to be a good partner for Brandenburg. Rohkunstbau must now stabilize. We have now been around for almost 30 years and I can see that we are no longer treated as a project." The last castle that Rohkunstbau used was promptly sold. This year's theme "Future. Into the Open" could be read as an application for future use in the Altdöbern Castle for decades to come. For public use with art as the royal road. Anyone who now dares to step over the threshold will see something particularly special in Altdöbern Castle.

"XXVII. Rohkunstbau - Zukunft. Into the open" until October 30th at Schloss Altdöbern, Am Park, 03229 Altdöbern 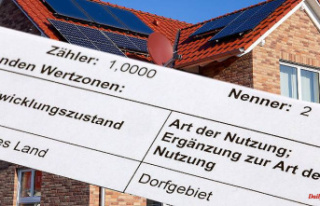