Lions, tigers and an unbearable year at Jack Hanna’s zoo

COLUMBUS (OHI) -- Columbus Zoo and Aquarium hosted a bear of a holiday. COLUMBUS (OHI) -- Columbus Zoo and Aquarium hosted a bear of a holiday.

It began Jan. 1, the first day of famous zookeeper Jack Hanna's retirement after 42 years as the beloved celebrity director-turned-ambassador of the nation's second-largest zoo.

The zoo looked like it was losing its life force, as if "Jungle Jack", a khaki-wearing animal lover, were the only thing that could sustain it.

In March, the news broke of a financial scandal. Top executives resigned. Investigative teams were established. Mea culpas were issued.

In April, as an international streaming TV channel was about to launch, a disturbing animal rights documentary claiming Hanna had ties with the big cat trade premiered. Hanna's family declared that he was suffering from dementia and would be retiring from public life.

A commission of the respected Association of Zoos and Aquariums removed the Columbus Zoo's main accreditation in October. It did so citing financial and animal rights revelations. Last week, Zoo officials filed an intent-to-appeal.

President Dan Ashe said that "it's been tough for the Columbus Zoo," but added that it's still possible to rest assured that the 10,000 animals at the zoo are being cared for by the 2 million visitors annually.

Ashe stated that Tom Schmid, the Texas State Aquarium's current leader, is the right choice to lead the zoo. "He's going bring the Columbus Zoo back to life."

Schmid, 56 years old, will begin his new role Dec. 6th as president and chief executive officer of the zoo along with its related businesses including Zoombezi Bay waterpark and The Wilds conservation center.

Keith Shumate, chairman of the board, described Schmid as "extremely intelligent, ethical, and passionate about wildlife conservation"

"We cannot change the past, but it's possible to do a lot to acknowledge those wrongs, to apologise and to correct our mistakes," stated Nicolle Gomez Racyy, spokesperson for the zoo. "The people who took advantage of their power are gone and the people who are cleaning the mess in the room are under new leadership, so we're moving on. This is the only thing you can accomplish.

Interim CEO Jerry Borin oversees the zoo's business since Tom Stalf, then-CEO, resigned in March. Greg Bell, his chief financial officer and Greg Bell, were also found to have allowed family members to live in homes owned or controlled by zoos and offered tickets to entertain their loved ones.

These findings were confirmed by subsequent reviews. One forensic found that financial abuses committed by Stalf, Bell, and two other former executives resulted in the loss of more than $630,000. Their spokespeople confirmed that Ohio's attorney general and state auditor are continuing to investigate.

After the financial hardships resulting from the 2020 pandemic, the spending abuse was particularly devastating.

Columbus Zoo is usually open 363 days per year. Its earned revenue is more than half from admissions and other sales such as gift items and food. It was shut down for several weeks in that same year, resulting in $20 million in operational losses. 29 full-time and part-time employees were fired, while 33 positions in non-animal-care were eliminated across The Wilds and the Zoo.

Even more troubling were the accusations made in "The Conservation Game," a documentary that premiered at Santa Barbara International Film Festival, April 6.

Hanna was tied to Hanna and the big cat trade in the film, which showed that the cubs of lion, snow leopard, and tigers that Hanna had adored on TV were not from the zoo. Many of these cubs were donated by backyard breeders or unaccredited roadside wildlife zoos, and then disappeared into private hands.

Hanna's family said that they had not seen the film and couldn't comment on the claims after the film became more popular. The family released a statement saying that Hanna worked all his life to improve the world of animals.

Ashe stated that the revelations in the film, along with the growing file of his association on the zoo’s Animal Programs department, were major factors in Columbus' removal from accreditation.

Ashe stated, "They were and have been dealing with non-AZA member members for some time and pretty clearly not disclosing these transfers." "Those are serious issues in our accreditation process."

The zoo apologized for the majority of the revelations made in the film and acknowledged them over the summer. It updated policies and reporting systems for acquisition and disposition ambassador animals within the Animal Programs division. Retired as vice president for animal programs.

"We made some errors. Shumate stated to the Dispatch that there is no doubt.

Borin also reversed Hanna's opposition to the Big Cat Public Safety Act, which was opposed by the zoo. In April, he announced that zoo support was being given for federal legislation banning private ownership of large cats as pets and prohibiting cub-petting venues. Racey stated that the bill had been significantly revised and the bill was pending in Washington.

Webber stated that he is giving the zoo another chance due to its strong response to the film and that he hopes the public will do the same.

He said, "I feel very positive about the outlook both at the Columbus Zoo as well as for the animals we've seen exploited over the decades." "Even though it was a difficult year, things will get better," he said.

Ashe stated that the disclosures of the year have also caused soul-searching within Association of Zoos and Aquariums. Hanna has been a star and the Columbus Zoo is a landmark institution.

He said, "Our members are known for their excellent care of animals. So whenever we see Columbus, which frankly, we should've caught it earlier, it is an opportunity to reflect and improve." "That's where the silver lining is in all this. I believe Columbus will be a better zoological facility and we'll also be a better accrediting agency. 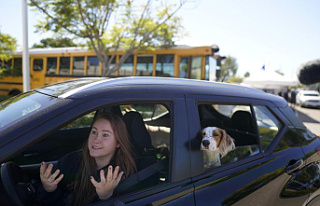