Listen to nature for 90 minutes: hiking in the Wadden Sea - and remain silent

If you book a mudflat hike, you will usually be told interesting facts about lugworms, beach crabs and mussels. 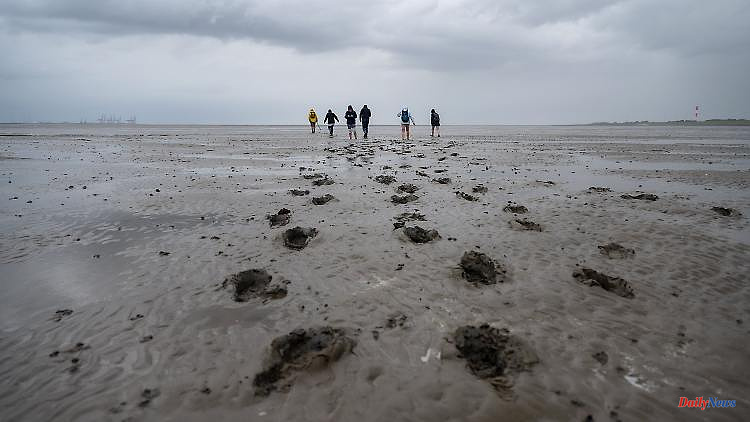 If you book a mudflat hike, you will usually be told interesting facts about lugworms, beach crabs and mussels. Everything is a little different on the "Sound of Silence" mudflat hikes in Eckwarderhörne.

The wind is fresh, the temperature is too cold for the time of year, rain showers are forecast. Nevertheless, a small group has come together for an unusual mudflat hike in front of Eckwarderhörne (Wesermarsch district) on the Butjadingen peninsula: During the 90-minute tour in the mudflats, everyone will be silent. Just don't say anything, just pay attention to the sounds in nature - that's what Thomas Büsing announces. "When we're at the tidal creek, we'll stay for five minutes. Just listen to what you're hearing," says Büsing and adds: "Enjoy it."

Büsing has been a state-certified mudflat guide for four years. He used to be a senior accountant, then came the first burnout, later the second. He struggled with anxiety and panic attacks and became unable to work. The now 56-year-old found peace and serenity in the mudflats. This led him to take groups there and tell them all sorts of interesting facts about lugworms, crabs and beach crabs.

"At some point I thought it would be nice to just shut up," he says in his direct way. Büsing didn't have to persuade his boss Matthias Schulz to offer silent mudflat hikes: "Sound of Silence," he calls them. "There are more and more stressed people for whom such a break is good," says Schulz.

Unusual mudflat hikes are not uncommon on the North Sea: tours with dogs, Nordic walking in the mudflats, sporty mudflat hikes over seven hours to the Arngast lighthouse or mudflat hikes into the sunset with the full moon rising are all offered. Watt guide Gerke Enno Ennen offers the last two. "When the conditions are good, it's an experience. Usually there's no wind at that time, so you get to see nature even more." The full moon tour is booked by families with children from the age of eight as well as by seniors. "Full moon and sunset: that's what draws people in," says Ennen.

The participants of the "Sound of Silence" tour, on the other hand, happened to come to the silent mudflat hike that day. On the day, at the time, at the place there is no other offer for a guided tour into the mudflats. Beate and Patricia Lehn, mother and adult daughter, come from the Mainz region, Mascha Hesske and Matthias Baumann from Cologne and Düsseldorf. They are on the North Sea coast for a few days and now they want to get involved in the experiment. Two of the four have never done a mudflat hike. "He didn't even know what that was," says 25-year-old Mascha Hesske about her boyfriend Matthias.

Finally it starts on a sign from Thomas Büsing. The mobile phones are switched off, nobody says anything anymore. Some silently point to things or creatures they discover on the mud flats, now and then someone stops to pick up a Pacific oyster or a clam. "Take the things you see with you in your head. We will then discuss them afterwards," Watts leader Thomas Büsing said before the start.

There is laughter when someone suddenly sinks one leg deep into the mud. Arriving at the tidal creek, you can hear the wind above all. Patricia Lehn is a bit boring, as she will say later, so she draws something in the mud with her foot.

On the way back it almost gets a little dramatic, so that Mascha Hesske feels compelled to briefly break her silence. The group stands in front of another, deep tidal creek that has to be crossed. The water reaches up to the thighs, just at this moment it starts to rain cats and dogs. Mascha Hesske, slightly desperate, calls Thomas Büsing to help her cross. "I couldn't help it," she will say later. She's stuck in the mud with her rubber boots. Thomas Büsing comes to the rescue. "But I didn't feel the need to answer," he says afterwards, smiling.

When the group has solid ground under their feet again after about 90 minutes and has cleaned them of the mud, everyone is allowed to talk again. "I thought it was beautiful," says Patricia Lehn. "But I was hoping to hear more, a seagull maybe." The wind was too loud. "I didn't know if I was allowed to laugh, but sometimes I could have thrown myself away," she says. The repeated sinking in the mud was too funny. So has the goal of letting the participants calm down been missed?

Thomas Büsing doesn't think so. "It's not supposed to be a therapeutic measure, and laughter is allowed," he says. What Mascha Hesske says afterwards is typical for him: "For the first half hour I had a total urge to communicate. For me, it was a big challenge not to say anything." But once you've accepted the silence, says Büsing, a certain level of composure sets in. That seems to be the case with his small group as well. The questions about the things and creatures that were picked up or seen along the way are limited in the end - although everyone is happy to finally be able to talk again.

1 "They look like mine": potted vulvas and... 2 Trauma and hidden talents: How school experiences... 3 Ladiges is cooking: Poultry is now on the grill 4 Debate about "useless" women: what society... 5 El-Masry for the young years: Two actors play Mohamed... 6 "Bachelorette" wants passion: mud on the... 7 "Last semester or trimester": Does Brad... 8 'Has nothing left to lose': Is Amber Heard... 9 Fox, Warren, Palcy and Weir: And the honorary Oscar... 10 "I'm more than sick": Ruth Moschner... 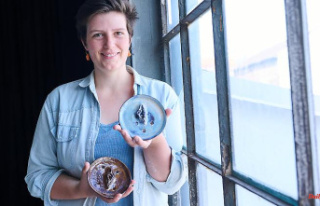