One for all: Twenty-two summers to go

The columnist is not old. 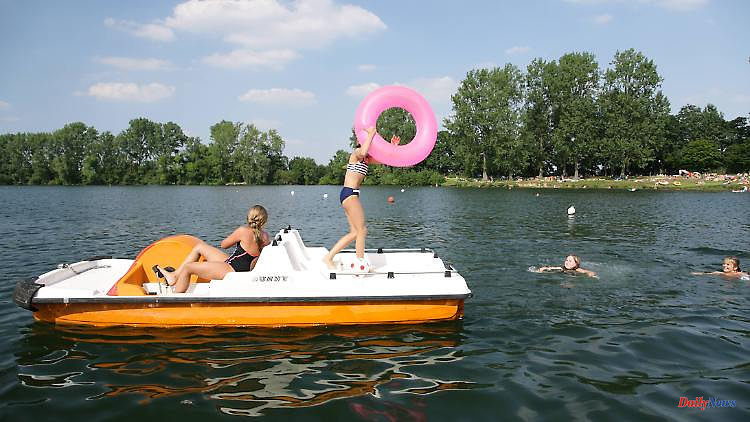 The columnist is not old. Sometimes, after getting up, she has a bit of a back. Otherwise equipped with the enviable attributes "glass half full" and "professional youth", she is now thinking about the time that remains.

It's all a matter of time: I was telling a friend the other day - we had been drinking marginally - that if I lived to be my mother's age, I would still have 22 summers ahead of me. To be honest, only 21, because this summer I'm already in. I almost cried at my words, but he smiled and said: "22 more summers? That's great, what else are you up to?" He is a really relaxed, Hanseatic fellow, nothing ever seems to disturb him, he is there when you need him, he helps, is at peace with himself, he loves his wife and his family, has always been the stability in Person. I used to think I would be like that later. Enviable. But I didn't become like that. And I probably won't do it again in my hopefully 22 summers. And the other three seasons.

Everything in front of me used to seem endless. For example, there is still a long way to go until the summer holidays. Then they were there, and these six weeks promised sweet idleness and also endlessness: traveling with the parents, not having to worry about anything, not planning anything, not having to pay for anything. Nothing must have. Except maybe clearing the table or the difficult decision in the outdoor pool: Dolomiti or Cornetto? Thoughts revolved around the next bikini, the cute guy from the lower class, and how I would survive the already mentioned holidays with my parents in Denmark, Austria or Italy without the cute guy. He probably had a new one at the end of the holidays, but that didn't really matter, because I had tears in my eyes anyway, because I kept falling hopelessly in love with a Viennese, Greek or French guy on vacation that I anyway couldn't see anything and just waited for the landline to finally ring. Or a letter came. It all subsided after a few weeks (when the doorbell actually rang, I let myself be denied). I curled up in a book, picked currants with Grandma in the garden and she made jelly. In the evenings you saw funny programs on TV, there were three programs. They ended up with a test image sometime around midnight.

Forty-year-olds seemed old to me. Sweet, arrogant in hindsight. It's been a while for me forty and I'm wondering where the time has gone. I'm rarely wistful, I don't look back all the time, I don't think everything used to be better anyway, I like my life and I'm excited about the future. But still, I can't get this 22 out of my head. So I should do something with that. I know that I won't travel the whole world anymore, but that's not so bad, I don't want to see everything. There are places that really don't interest me. But there are also places I want to go to over and over again. Is that doable?

I will also no longer study medicine, although it seems to me the only really sensible career path. Or psychology. In the future we will need a great many psychologists, psychiatrists and therapists, because we have become quite broken over the years. And anyone who thinks that in the past not everyone had to lie on the couch with Doctor Freud - is wrong. Many more people should have afforded a coach or something similar, but they didn't, because the western world was in a permanent upswing, everything went faster, higher, further, better, richer, happier. The receipt, if you don't take care of yourself, will come later. You can currently look at this receipt in the old people's homes in our country. But that's another topic.

Honestly, I don't mean to put you down, but if you turn on your brain every once in a while, you can get weird ideas. 22. Time is ticking. Born to Die. And yet we like to pretend that we are forever young. Sometimes there is something comforting about time, in the sense of "this will pass" when things are bad. Time just never stands still. Even if you occasionally have the feeling that time has stood still. That nothing is progressing. That something has to change. Then time passes infinitely slowly. We now clap our hands happily when a place looks as if time has stood still. We like to discover hotels in Mallorca that still have an old charm, rubber animals that smell unhealthily of plastic in Rimini when it is exposed to the sun, means of transport such as loudly rattling Vespas or quiet donkeys on Hydra.

But some days time just flies by. Of course, when it's particularly beautiful. In the meantime, we like to refer to "the good old days" again, a friend just wrote on Instagram that a certain restaurant has been as wonderful as ever for decades (!). And why is he raving about it? Because the current times are so exhausting. The dear soul longs for rest, for stability, for "before". It's still true: "Everything wasn't better in the past", but we were younger. And now we're more transfigured, our brain (the most fascinating part of a human body, by the way) shuts down all the crap after a while. Zack, off to the drawer. We now have to do the things (for a long time) that our parents did and only now appreciate how hard it must have been for them that it was easy for us.

Yes, the challenges the world is facing right now are great. The long period of peace, growth, easy jetting and weekly bikini waxes is over for now I'm afraid. But only a few Hansels have really understood that so far (and just because I'm writing this now, I don't presume to claim to have anything really b-e-g-r-i-f-e-n, the haters among the readers can please leave the stylus stuck in). "Everything was better in the past" is of course absolute nonsense. Women used to have their periods or menopause and men had erectile dysfunction, they just didn't talk about it. Every age has its pitfalls, and as an attentive reader of ntv.de you know all too well what pitfalls our time has. I only say climate, corona, war. The drama about the climate is making great strides, the topic of Corona is still hard on some people: When will it really be over, we ask ourselves after more than two years with the virus. The war in Ukraine has started right before our eyes and it hurts to see that it will not end.

How many summers do you think you have left, or don't you care? We can't change it anyway, that's true, but what else do you have on your bucket list? I still have a few special corners of this world to discover - Chile, Argentina, Mauritius, the Northern Lights, back to Morocco to name a few - I'm thinking about grandchildren (without being able to actively intervene, unfortunately), I want to see myself relax. Big plan also to do Ayurveda in India. But otherwise, in everyday life, what are your life goals? I am still practicing. Just like I've felt my whole life that I'm practicing. The question is what for? Until then: Namaste, bitches.

1 'Bisexuality is not a trend': The neglected... 2 Ladiges is cooking: Poultry is now on the grill 3 More kitsch than art: garden gnomes remain a phenomenon 4 "Shameless and foolish": Britney Spears'... 5 Private judge engaged: Google founder Brin divorced... 6 "Still dreaming": Gündogan celebrates his... 7 "One year to go": Johnson sees the next... 8 A daily cup of tea together: How Camilla becomes 75... 9 "Stand by my statement": Heard fears further... 10 The "crime scene" in a quick check: back... 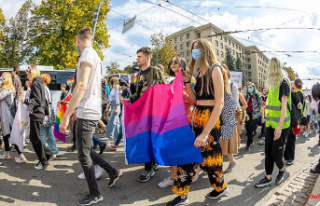 'Bisexuality is not a trend': The neglected...