After the Corona onset: Laschet Lockdown for the district of Gütersloh

Due to the Corona outbreak in a slaughterhouse in the Tönnies group, the country imposed in North Rhine-Westphalia, a Lockdown for the district of Gütersloh. Fo Due to the Corona outbreak in a slaughterhouse in the Tönnies group, the country imposed in North Rhine-Westphalia, a Lockdown for the district of Gütersloh. For the first time since the Corona-loosening is to be conducted in Germany, a whole circle back "to the measures that have been applied a few weeks ago," said Prime Minister Armin Laschet (CDU) on Tuesday in Düsseldorf. The measures are valid until the end of June, but can also be extended. The purpose should be to "calm the Situation" and "testing to expand". Until the end of the month will give more clarity about the extent to which people who do not work in the case of Tönnies, the Virus had infected, said Laschet.

It was at the outbreak in the meat plant in Rheda-Wiedenbrück, Germany, the largest individual infection events in Germany, said Laschet. A "special situation" arises due to the scattering of the places and the internationality of the workforce. 1553 employees of the slaughterhouse are now been tested positive for the Virus. Other cases could there be in their family environment. Therefore, the number of Infected is higher. At the same time, there is in the circle, but only 24 confirmed Corona infections in people who do not work in the case of Tönnies, said Laschet. Nevertheless, the state government had to Lockdown determined to minimize the risk of infection. "What are we doing here, not in Germany," said Laschet. In the neighbouring district of Warendorf to the Corona pads tightened, though not across the Board.

The centre of the Corona outbreak in Tönnies could be localized according to laschet's information in the meat division. In this Department there are the most Infected. May special conditions such as the cooling to the spread of the Virus. The company Laschet alleged lack of cooperation. Therefore, the authorities have set the release of data from the plant workers of Tönnies finally. "There was no longer cooperating, as it was", said Laschet.

1 The producer Steve Bing kills himself by falling from... 2 Michael Keaton back in the suit of Batman 33 years... 3 For the first time, the advertising revenues of Google... 4 The european car market is expected to undergo a historic... 5 Automotive: the State has launched an appeal to manufacturers... 6 Warning to Brazil: investors call for the end of the... 7 Prior to the annual General meeting: the hooks of... 8 Education report: The digital learning success depends... 9 Further intensification is possible: Washington takes... 10 Riots in Stuttgart: Many of the suspects were drunk 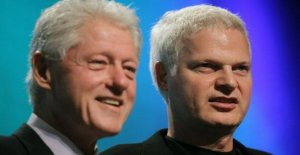 The producer Steve Bing kills himself by falling from...