Because of the forthcoming election campaign event of America's President, Donald Trump, the mayor of the city of Tulsa in the state of Oklahoma has declared a Because of the forthcoming election campaign event of America's President, Donald Trump, the mayor of the city of Tulsa in the state of Oklahoma has declared a state of emergency for the city. For several streets around the venue were placed under a curfew, which was already in the night on Friday until the early hours of the morning (between 22 PM and 6 am local time) in force and, accordingly, on the two following days, should apply, as an Ordinance of the city emerges. Trumps appearance is scheduled for Saturday evening.

The strict measures established the town with the fear that it could lead to unrest. In view of the rally of more than 100,000 people in the vicinity of the venue would be expected, in addition, protests were announced as a reaction to the event. There is evidence that members of organised groups that had been involved in "destructive and violent" actions in other States, wanted to come to the city to cause unrest in the environment of the rally.

Since the death of the African-American George Floyd in a brutal police operation in Minneapolis (Minnesota) at the end of may, there are country-wide protests against racism and police violence. Came to start it in part to violent clashes and looting, in the meantime, the demonstrations are largely peaceful.

Trump had pulled with his appearance plans displeasure - not only because of the ongoing Corona pandemic. Given the date and location of the rally, he was accused of, to encourage Right-wing extremists. Originally he had intended the election campaign appearance this Friday, to hold, to the in the United States, "Juneteenth" is celebrated. 19. June, the end of slavery is commemorated.

Tulsa was also on 1. June 1921 was the scene of a massacre by a white Mob in the black population. Historians view this as the worst incident of this kind in the United States after the end of the civil war. Hundreds of people were killed.

Trump has threatened on Friday also possible counter-demonstrators. "All the protesters, anarchists, troublemakers, looters or riff-raff who come to Oklahoma, please understand that you will not be treated as in New York, Seattle, or Minneapolis," wrote Trump on Friday on Twitter. In Tulsa, it'll proceed quite differently.

1 The poor are more affected by the confinement that... 2 A plea for black woman: Klobuchar waived candidacy... 3 Violation of the concept of Hygiene: fines for Union... 4 In the case of accident seriously injured: Alessandro... 5 Football-history in the Emirate: As Qatar, from the... 6 The death of Carlos Ruiz Zafón: His dream in Sepia 7 Documentary film Dad's Apple TV+: father to be very 8 McKinsey analysis: schools need twice as much money... 9 Data center as a successor?: Sweden remain firm in... 10 Corona exacerbated plight: Karstadt, Kaufhof shrinks... 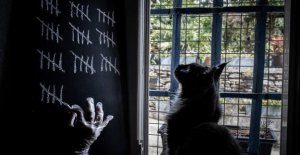 The poor are more affected by the confinement that...