A party leader on fire: Merz balances between humility and brawling 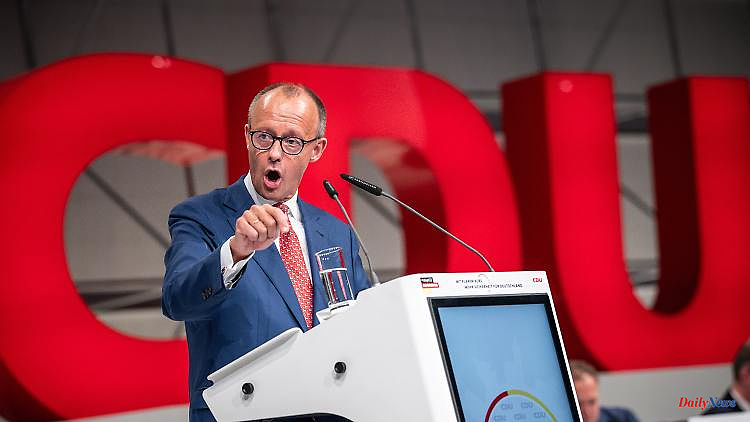 In front of 1001 delegates at the party conference, CDU leader Merz shines with harsh traffic light criticism, nasty jokes and self-criticism. Is that enough to keep impending conflicts away from the party congress and to send a signal of unity?

How difficult the balancing act will be this weekend is almost constantly present at the CDU party conference in Hanover: One year after their historic election defeat, the Christian Democrats want to reassure themselves of their common principles at their party conference in Hanover and demonstrate clarity, unity and modernity. It's urgent. Because dissatisfaction with the governing party SPD hardly pays into the Union's account in the polls.

But at the same time, the problems that are unsettling the country are pushing so massively into the exhibition hall that every minute of too much navel-gazing could be immediately perceived as ignorant self-love. In Europe, a war of aggression is raging on a sovereign state, Germany fears an energy crisis in winter, climate change is becoming increasingly clear here too - and the CDU is discussing for a weekend whether it wants to introduce a women's quota?

Friedrich Merz knows that the line that the party is walking on these two days is a fine one, and that he has to be the one who sets the direction and also the step with his speech at the beginning of the party congress. He has had experience with moments like these, when words have to be right and sparks fly, albeit not good ones. Twice in the past few years, when Merz was about party chairmanship, he remained surprisingly pale during the crucial speech.

But Friedrich Merz will clearly leave this experience behind in September 2022. He actually succeeds in finding a balance between the different topics that must determine this party congress. He confirms the Union's unity, which it had so dramatically lacked recently: the parliamentary group was closed like never before, with Markus Söder he had "firmly promised himself", 2021 will not be repeated.

Merz celebrates the success of Daniel Günther and Hendrik Wüst and certifies that the Social Democrats in NRW, the federal state that they themselves have always called their "chamber of the heart", have had nothing less than a heart attack. 2022 could be the most successful in the history of the party, the party leader rejoices, but then there is the condition: According to Merz, all of this will only work if the party does everything right in the next few weeks. Doing it right means, he explains, "that we make smart decisions at this party conference." You have to deal with the party, but even more with the problems in Germany.

Because, Merz leaves no doubt about that, the CDU must not only be concerned with finding its way out of the opposition in these times. Opposition is not crap, as SPD veteran Franz Müntefering once said, but "opposition can make a difference". Merz tells the story of his own party entry in 1972, when the CDU was also in the opposition. The chancellor's name was Willy Brandt and he was just about to recognize the inner-German borders by means of a treaty with the GDR and to begin "good neighborly relations". The Christian Democrats were the only ones who had backed reunification without any ifs or buts. That's why he came in then.

In a mix of personal stories and at times harsh criticism of the traffic light coalition's decisions, Merz succeeds in reconciling the CDU with its current role and at the same time committing it to a tough fight for power. He quotes Richard von Weizsäcker, who, as Federal President, said in a speech commemorating the end of the Second World War in the 1980s that young people were not responsible for what happened. However, they are "responsible for what becomes of it in the story," according to the quote. "I could never have imagined that there would be another German chancellor after this sentence who would silently accept" that sheer anti-Semitism was being expressed there.

Merz skillfully contrasts the allusion to the visit of Palestinian President Mahmut Abbas in August, who managed to put the Holocaust into perspective without Olaf Scholz standing next to him contradicting it, with Union-led steadfastness. You don't have to claim that Scholz is not a convinced representative of German reasons of state towards Israel. The comparison with Weizsäcker is sufficient.

But as if his point wasn't good enough, as if the interim applause could surge even louder, Merz goes one step further: "Olaf Scholz may not remember this encounter today." The biting humor leaves no doubt: Friedrich Merz is in his element and uses the opportunity to use the aforementioned responsibility for learning from German history as a reason for never working with the AfD. "Never".

Next, Merz turns to the Ukraine war, which would not only represent a turning point, but an "epoch break". The CDU put together the large package of more than 100 billion euros for its own defense, "because we also bear responsibility for the fact that the Bundeswehr is not in the state in which it should be". It will not remain the only point on which Merz formulates self-criticism, but first of all he can elegantly join in the criticism of the hesitation of the traffic light: "With the FDP and the Greens, I would have given an export license for 100 Marder tanks," says the CDU boss. So that it becomes clear "that we are doing everything we can to help this country".

When it comes to security of supply, Merz will also blame the CDU for the energy debacle. Germany has become too dependent on Russian gas. "That was a mistake," says Merz. "A great political stupidity. We have to correct that, we were also involved in that." However, there has never been such political corruption in the CDU as in the SPD, Merz rumbles immediately afterwards. The network is not based in Berlin, but "here in Hanover".

After 16 years in government, Friedrich Merz knows how to admit the CDU's clear complicity in serious grievances, but then to draw the line further to loud criticism of the incumbent government. This creates a mood and the catchy headlines that the CDU needs to show that we are not only concerned with ourselves and our past, we are taking a stand on the problems of the present.

As soon as he crossed the finish line, Merz lashed out at the public broadcasters and the use of gender language in universities. Regarding the controversial application for the women's quota for CDU management positions, which is to be passed on the same evening and which Merz supports: not a word.

The message of this weighting is unmistakable: For the party leader, the quota is anything but an affair of the heart, but a grudging but necessary compromise, since the lack of women in the party is unmistakable. A sign of a lack of modernity that one can no longer afford today.

Merz hopes that the party congress, especially the Junge Union, which has largely spoken out against the quota, will adopt the pragmatism demonstrated and wave the decision through. The later evening will have to show whether this works. Merz has no problem getting his application to introduce the new post of Deputy Secretary General and to fill it with the unknown Christina Stumpp from Baden-Württemberg.

He prefers to ignore the quota debate and instead urges the party congress not to let the self-discovery process get too big. "A lot of voters, not just members, are looking at us," they wondered how the CDU was dealing with the challenges of the time. "Please classify it correctly," he concludes, "dealing with ourselves" is necessary, but dealing with the situation of the people is more necessary. Whether the CDU will manage to send this signal from Hanover will be known tomorrow. Friedrich Merz at least created the best conditions for this with his speech.

1 Arminia is stuck below: HSV jumps to the top of the... 2 Hesse: Six seriously injured in an accident with a... 3 North Rhine-Westphalia: knife attack in Aachen: suspect... 4 Baden-Württemberg: clothes on fire: woman dies from... 5 Mecklenburg-Western Pomerania: the car comes off the... 6 After an emotional debate: the CDU decides on a quota... 7 The day of the war at a glance: Stoltenberg sees war... 8 "Change for the family": The king has a... 9 Bayern: "Club" defeats Bielefeld thanks... 10 Hesse: motorcyclist died in an accident 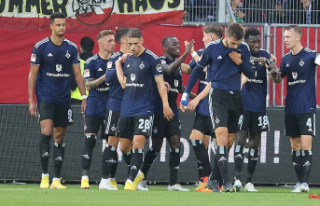 Arminia is stuck below: HSV jumps to the top of the...