Moscow is also following the meeting between the Federal Chancellor and the President of Ukraine with great interest. 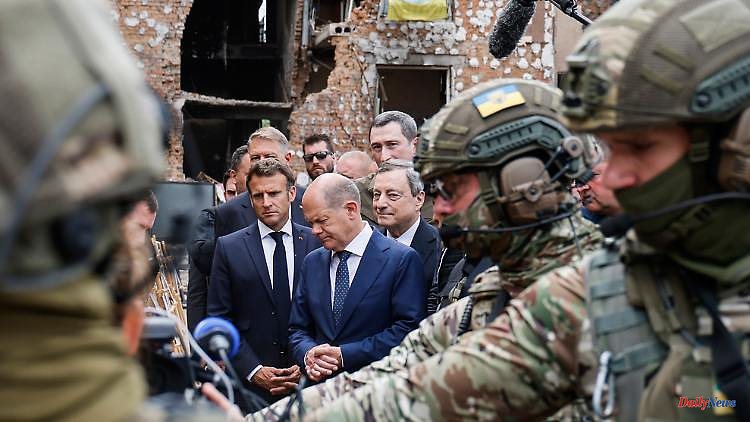 Moscow is also following the meeting between the Federal Chancellor and the President of Ukraine with great interest. Putin's spokesman emphasizes that Scholz should not only talk about arms deliveries, but that Selenskyj should make his misjudgment of power clear.

According to the Kremlin, Chancellor Olaf Scholz and French President Emmanuel Macron and their colleagues from Italy and Romania should not only concentrate on military aid for Ukraine during their visit to Kyiv. Moscow hopes that the representatives of the EU states will "get Ukrainian President Volodymyr Zelenskyy to look at the situation as it really is," said Kremlin spokesman Dmitry Peskov. Russia's ex-president Dmitry Medvedev generally questioned the purpose of Scholz's trip. He described the visit as the visit of "European fans of frogs, liverwurst and spaghetti".

The visit should not only be about further arming Ukraine. "This is absolutely pointless, it causes people to suffer and will simply cause further damage to this country," Peskow emphasized. The Russian military now reports the destruction of Western weapons in Ukraine almost every day. For months in the war, Russia has accused Ukraine of misjudging its strength.

Kyiv has categorically rejected Moscow's calls for surrender. Russian President Vladimir Putin ordered the invasion of Ukraine on February 24. At the beginning there were also negotiations between representatives of Ukraine and Russia about a possible end to the war. These were aborted without result.

The chief negotiator appointed by Putin, Vladimir Medinski, has now once again blamed Ukraine for the failure of the talks. He stressed Moscow's willingness to negotiate. The Ukrainian head of state Selenskyj had recently emphasized several times that the war should be decided on the battlefield. He therefore repeatedly demanded heavy weapons from the West in order to liberate the areas occupied by Russian troops.

Putin also justified his war by saying that Kyiv could try to recapture the Black Sea peninsula of Crimea, which Russia had annexed in 2014. Kremlin spokesman Peskov stressed that all precautions for the security of Crimea had been taken. The Kremlin is also aware of the new threats from Kyiv to target the Crimean bridge to the Russian mainland in the event of delivery of western weapons. Moscow had previously threatened to bomb the Ukrainian capital in the event of an attack on the bridge. 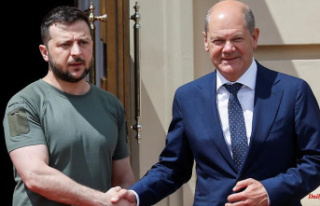 "We appreciate it": Selenskyj receives Scholz...