Announcements to SPD and Greens: Lindner: Times of the bazooka principle are over

FDP leader Lindner made clear statements to his coalition partners on several issues: Anyone demanding further relief must say where the money should come from.

FDP leader Lindner made clear statements to his coalition partners on several issues: Anyone demanding further relief must say where the money should come from. There will never be a citizen's income without sanctions. And running time extensions would not be such a big step for the SPD and the Greens, says Lindner ntv.de.

Federal Finance Minister Christian Lindner has rejected further relief this year. "We have already relieved the burden enormously," said the FDP chairman ntv.de. "We constantly have to shoulder additional expenses when it comes to stabilizing companies in the energy industry, for example. Anyone who thinks that there is still a hidden treasure trove somewhere in the federal budget is wrong."

A few days ago, Federal Economics Minister Robert Habeck said that further relief for medium and low incomes in the coming year was inevitable due to the sharp rise in gas prices. He is certain "that the Ministry of Finance will make provisions for this," said the Green politician.

SPD leader Saskia Esken had also called for a further suspension of the debt brake. Lindner also rejected this. "Inflation or a recession are not reasons to lift the debt brake," he said. Germany can no longer afford debt because the state itself now has high interest rates. "For the next year I have to plan with 30 billion euros in interest costs. In 2021 it was 4 billion euros."

Lindner emphasized that the Federal Republic was also experiencing a turning point in economic terms. "Anyone who wants to spend more money this year must also say at the same time where the money is to come from. Simply calling for higher borrowing, I will not be able to accept that in the interest of the country. The times in which we are during the pandemic acted according to the bazooka principle are over."

On July 1, a suspension of the Hartz IV sanctions decided by the traffic light came into force. The coalition was thus reacting to a decision by the Federal Constitutional Court in 2019. In its election program, the SPD had promised the abolition of "unsensical and unworthy sanctions", the Greens had spoken out in favor of a guarantee without sanctions. In the coalition agreement, the traffic light parties agreed to suspend the previous sanctions for one year.

Lindner said that anyone who does not keep appointments, for example, “must be able to be shown a limit through sanctions”. Lindner also rejected the increase in standard rates demanded by the SPD and the Greens. "Instead, we have to improve the opportunities for additional income. Citizens' income must not become an unconditional basic income."

In the debate about an impending gas shortage, Lindner spoke out in favor of searching "for deposits of our own gas and oil deposits in Europe". Natural gas extraction through "fracking everywhere" is not an option in Germany, he said. "But using deposits in the North Sea makes sense and is feasible. There will also be situations on land where the use of unconventional gas deposits is justifiable."

In addition, the Federal Minister of Finance called for an extension of the service lives of the three nuclear power plants still connected to the grid. "We shouldn't be too picky in this emergency situation," said Lindner. In the long term, nuclear power is not an economically viable option. "In the short and medium-term perspective, however, a limited term extension is seriously on the table."

Lindner clearly rejected a speed limit in return for the SPD and the Greens. "We currently have a high oil price, but no oil shortage. Mixing these two completely different issues together would only be a political bazaar deal. That doesn't do justice to the seriousness of the situation."

It's about recognizing realities - after all, the FDP did that too. "I took out 100 billion euros in loans for the Bundeswehr special fund because otherwise we would not be able to catch up on the backlog of equipment," says Lindner. For the SPD and the Greens, he sees a temporary extension of the term as "a small step, because the Social Democrats and the Greens share the common goal of having a safe, affordable and climate-friendly energy supply." For him, it is more in need of explanation "why it is better to start up lignite-fired power plants again to the maximum instead of operating the safe, CO2-free nuclear power plants for a very short time longer".

1 Russian supply route: Kiev artillery damages key Kherson... 2 Criticism of the federal government: Kiesewetter:... 3 Commission plan: EU countries should be forced to... 4 Hundreds of euros difference: wage gap between East... 5 Before the start of filming of "The Queen":... 6 Cases in Germany too: are bites from exotic poisonous... 7 Discovered in neighboring galaxy: black hole astonishes... 8 Get legs under control: robot dog learns to walk independently 9 Iron deposits damage the brain: Even a little alcohol... 10 Analysis of drying spots: Can Alzheimer's be... 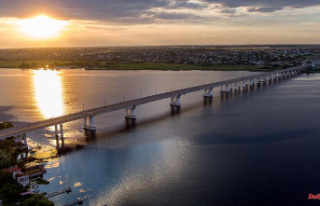