In six days there will be another election in Italy. 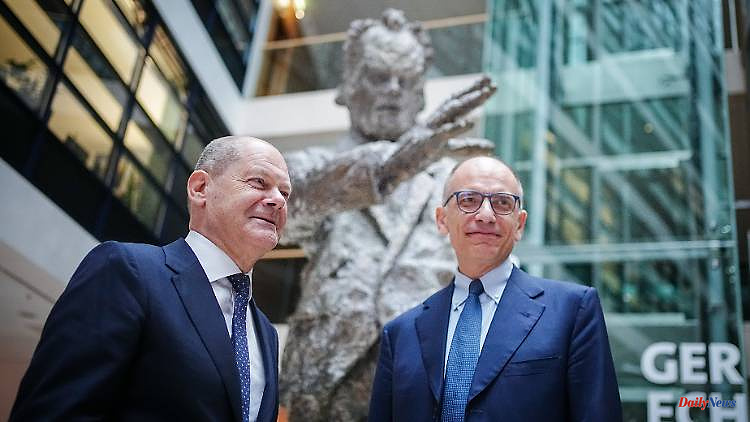 In six days there will be another election in Italy. And once again the Italians are helping to decide Europe's fate. The federal government is hoping for a victory by Enrico Letta - not just because the united front against Russia would crack with post-fascist Giorgia Meloni.

No, Enrico Letta will not be received at the Chancellery this Monday. In order to be admitted there, the lead candidate of the Italian Social Democrats would first have to win the parliamentary elections next Sunday and - even more difficult - then forge a reasonably stable government majority. If he succeeds, Chancellor Olaf Scholz will give the 58-year-old a warm welcome to his official residence. Relieved that Italy did not fall to the post-fascist Giorgia Meloni, and that Meloni is not the next EU-hostile right-wing populist with a penchant for authoritarian rulers to join the circle of European heads of state and government. Until then it is only enough for Letta for the Willy Brandt house.

The Chancellor comes to the SPD headquarters with Letta for the photo session, but remains silent so as not to interfere unduly in the Italian elections as the German head of government. Letta is allowed to take part in the meeting of the SPD executive board and then answer questions from the German press and the Italian Germany correspondents with party leader Lars Klingbeil. A lot is at stake on Sunday, says Klingbeil, and the election is "also a stepping stone for Europe." Letta is pleased to present itself as the Italian face of the European family. "If we win next Sunday, the democracies will be lucky," said Letta, standing next to Kingbeil. "If the right wins, Putin will be happy."

The vote on September 25 is "our Brexit," Letta tries to mobilize the electorate in Italy for the decision. If Meloni wins, Italy will be isolated in Europe, lose influence and could suffer serious economic disadvantages, is the dramatic message from the respected political scientist. But that's not so clear: Meloni would not be alone in Brussels, but would find potential allies in the governments of Hungary and Poland. Despite all the ideological differences between Meloni, the Hungarian ruler Viktor Orban - who is no longer a democratically elected head of government in the literal sense - and Poland's head of government Mateusz Morawiecki, there is agreement on important points. Meloni also wants to strengthen the veto rights of the individual EU states instead of allowing more majority decisions like Scholz and Letta.

The extent to which solidarity among right-wing populist politicians goes is shown by the EU Commission's announcement that it will punish Hungary for the corrupt misappropriation of EU funds: Morawiecki has already pledged his support to Orban, although Ukraine-supporting Poland and Putin-friend Orban in take opposing positions on this central issue. Meloni also supports Orban against the EU. Where Rome would place itself under Meloni when dealing with Russia is unclear. Since February 24, the ultra-nationalist Meloni has also left Moscow and has assured Brussels that she wants to stick to the sanctions against Russia. However, this assurance is fragile: Meloni's Fratelli d'Italia party is in an alliance with Matteo Salvini's Lega and Silvio Berlusconi's Forza Italia.

To this day, old political man Berlusconi keeps quiet about his friend Vladimir, while Salvini follows a photo in Moscow's Red Square, where he posed in a T-shirt with Putin's likeness on it. This happened before the Russian attack on February 24, but also long after the annexation of Crimea in 2014. Salvini confidants are said to have negotiated a deal in autumn 2021, according to which they got Russian oil at a bargain price and the margin of the resale - an estimated 3 million euros - should go to the Lega party coffers. Salvini struggled over the weekend to recapture his repeated criticism of Russia sanctions. He is only concerned that the Italians are not the ones who suffer in the end. A Meloni government would still be an insecure cantor on the subject of Russia, at least.

From the point of view of the federal government, and even more so from the point of view of the ruling SPD, the coming Sunday is a crucial date. Party leader Klingbeil likes to refer to the European momentum of social democracy, with the last eight heads of government whose parties belong to the social democratic party family SPE. Last week, this number was reduced by Magdalena Andersson: The Swedish head of government lost her government majority to a right-wing four-party alliance including the far-right Sweden Democrats. Klingbeil's thesis of the "social-democratic decade" in which, given the many transformation processes in Europe, social-democratic politics is more in demand than ever, is shaky. A surprise victory by Letta would turn things around a bit.

However, it is unlikely that this will happen. Letta's Partito Democratico could well emerge as the strongest force ahead of Meloni's brothers in Italy, but the PD lacks partners. Letta fell out with the 5-Star Movement after its leader Antonio Conte collapsed Mario Draghi's joint government. Compared to Letta, the more populist Matteo Renzi and his party Viva Italia have joined forces with the social-liberal Carlo Calenda and his party Azione to form a third bloc alongside the centre-right alliance and the centre-left alliance.

Her relationship with Letta is poisoned - which is also due to the fact that Renzi is a renegade from Letta's point of view: he was the chairman and hope of the PD for a long time. "Calenda and Renzi have one goal: to attack us, to destroy the left. They forget that the fight is against the right," Letta told the newspaper "Il Foglio" before leaving for Berlin. The pro-European camp is divided into many small forces, which can only succeed together in the Italian electoral system, which mixes proportional representation and majority voting.

A frustrating situation from the point of view of the traffic light, because Italy is also urgently needed in other areas: in climate policy, for example - Meloni denies man-made climate change, of course - and also in dealing with the looming recession. Italy had recently made considerable reform efforts, using the EU fund set up specifically to overcome the consequences of the pandemic. However, over-indebtedness still weighs heavily, while interest rates for refinancing government loans are rising. A government that does not accept any guidelines from Brussels and could lose access to aid worth billions could destroy the confidence of the financial markets in Italy again. The fact that Italy and other over-indebted EU countries could conjure up a euro crisis 2.0 if Europe's economy continues to go downhill is not a distant specter, but has long been theoretically played out in the Chancellery.

In addition, the power architecture of Europe has shifted noticeably and surprisingly clearly. In the Ukraine crisis, Poland and the Baltic States are setting the pace. This can be seen in the dispute over travel visas for Russians, where Paris and Berlin have recently been unable to assert their positions. Under Draghi, the Franco-German engine of Europe had gratefully leaned on the Italian outboard. The picture of Draghi, Scholz and Emmanuel Macron on a joint trip to Kyiv spoke volumes in this sense. In Berlin, at least, Meloni's statements promising loyalty to the alliance have raised hopes that a government led by her could also be involved in the Western European concert. But before such hopes are subjected to a reality test, Scholz, Klingbeil and the non-Social Democratic government members prefer to keep their fingers crossed for Enrico Letta - that he will soon actually be visiting the Chancellery for his inaugural visit.

1 Complex task: Kristersson is to form the Swedish government 2 Queen Elizabeth II buried: moving farewell to a monarch... 3 2.5 million per person: There are probably around... 4 North Rhine-Westphalia: 1-0 against Saarbrücken:... 5 Mecklenburg-Western Pomerania: Police: 4,500 people... 6 He was surprised himself: Jauch has something to do... 7 Hesse: Frontal collision on A671: Two seriously injured 8 Mecklenburg-Western Pomerania: More than 10,500 people... 9 Dow Jones closes in the black: fear of recession makes... 10 Work influenced by childhood: Hansi Flick on father:... 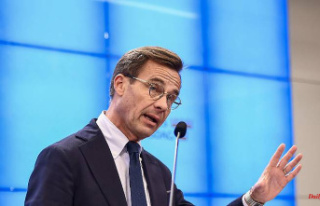 Complex task: Kristersson is to form the Swedish government