Bundeswehr General zum Donbass: The troops are fighting there "house by house"

The Ukrainian President Selenskyj has declared the battle for the city of Sievjerodonetsk a "fate battle", Bundeswehr General Christian Freuding explains on ntv. 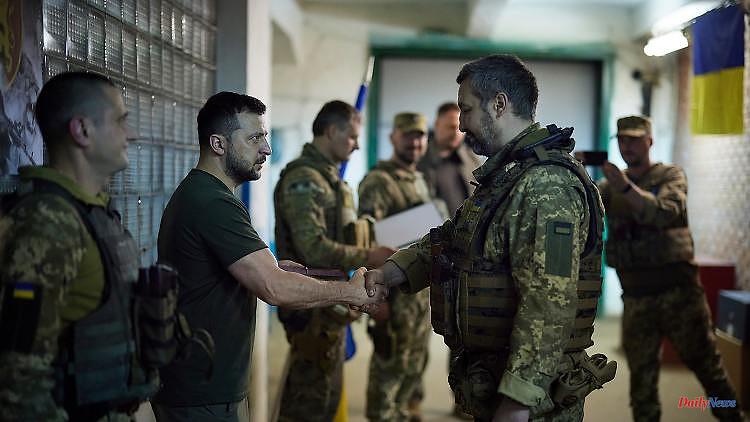 The Ukrainian President Selenskyj has declared the battle for the city of Sievjerodonetsk a "fate battle", Bundeswehr General Christian Freuding explains on ntv.de what role the city plays and why the last bridge over the river Siwerskyj Donets is so important for both opponents.

ntv.de: The battle for Sievjerodonetsk has been raging for days, and at the same time the Russian troops have managed to close the pocket around the contested area in the Donbass, except for a corridor 20 kilometers long in the west. What is the current situation?

Christian Freuding: According to our observations, the corridor has not changed significantly. Russia's gains in territory are certainly not on the scale they imagine. They're small, but they're steady. The Russians are currently trying to capture the city of Sievjerodonetsk. There the troops fight street by street, house by house.

The mayor says there are still 10,000 civilians on site.

We also assume that there is still a local population there, despite all the tragedy that results. As an important metropolis, the capture of Sieverodonetsk would not only gain more and more symbolic character by the day, but the city also has important crossings over the Seversky Donets River, which the Russian armed forces are attempting to seize.

What role does this river play?

The river is a natural obstacle to the further advance of Russian forces. The Russians are almost on its eastern shore. The Ukrainians defend in the course of the course of the river. All but one of the bridges over the Siwerskyi Donets have been destroyed. It has therefore become the eye of the needle for both sides.

All Ukrainian soldiers would have to cross this one bridge back to the west bank if they got into too much trouble?

So at least everything that includes mechanized forces. Soldiers with combat vehicles, replenishment facilities, supply facilities, everything has to be brought across the bridge. Infantry forces, i.e. foot soldiers, are not necessarily dependent on the bridge.

You said the Russian troops are making small but steady gains. Does that mean the Ukrainians are just as steadily retreating west, toward that final 20-kilometer opening where the Russian pocket has not yet closed?

In a nutshell, you can describe it like this. We observe that Russian attackers are trying to encircle Ukrainian troops from the town of Lyman in the north of the region and from the direction of Popasna in the south. The tactics of the Ukrainians will be to fight east of the river and also with the river for as long as possible without getting trapped in a possible pocket. As far as we know, the Ukrainians were preparing for a very slow defense further west.

How can Ukrainians "fight with the flow"?

This means using the river as an obstacle for the opponent. At the beginning of May, the Russians tried to cross the river at a different point, which then failed dramatically. This is a very strong position for the defender to let the attacker get to the river and then deny him crossing. For Ukraine, this is an opportunity to wear down their opponent there intensively.

Because then the troops are so busy overcoming the obstacle that they are defenseless against attack?

Exactly. If the Ukrainians have to move west, they will try to blow up this last bridge in Sieverodonetsk in such a way that it will no longer exist after the retreat. I'm speculating now, but I'd be very surprised if people didn't act like that. Then the Russians are dependent on transitions that they have to create themselves.

How difficult is that?

This is a very complex and difficult task. The condition of the bank must be explored, they must know: what is the condition of the bottom in the river? To do this, they have to get divers to investigate the reason. You have to find a spot with the type of ground that can take hundreds of armored vehicles coming up the embankment. This is usually the biggest challenge.

It sounds like the forces performing a river crossing must be specialized. Do you have large numbers of them in the army?

I can't speak for the Russian potential, but I can say for us that we even combined our so-called amphibious bridge-building forces in one battalion with the British land forces. The personnel and material for this is so highly specialized that we have brought together the forces here on a multinational basis.

The Russian troops have already failed in an attempt to cross the river at another point via the Siwerskyi Donets. There they lost bridge-building skills on a significant scale, and you can't retrain those skills in two and a half weeks. This weakens them further.

The commander of the Russian troops of the so-called "Donetsk People's Republic" and a high-ranking general were killed this week. How badly do such losses affect troop morale and coordination?

First of all, it is nothing special that troop leaders are at the front and also fight. But what we think we're observing among the Russians is that they lack the middle tier, which we see as young officers or experienced non-commissioned officers, the real backbone of leadership. We would have an overall structure that would absorb such losses at the top much better, and also a different understanding of leadership.

How exactly is that different?

We say we lead "by order". The person who carries out the order decides on his own responsibility how to reach the set goal. The Russian armed forces, on the other hand, appear to be operating according to what we call "command tactics". They are given a concrete instruction: "You go on this path up to this point and do this and that there". Point. And if the person who gave the order is missing, that naturally has more serious consequences than when people know their goal, which they can, want and should achieve without their superior.

How difficult will it be for Russian troops if it turns out that the target cannot be achieved at all with the prescribed behavior?

If going straight doesn't work, the Russian commander doesn't say, "Let's see if we can go around to the right." The Bundeswehr has a different claim and trains its women and men in such a way that they then look for a different path on their own responsibility.

Is command tactics a reason why Russian troops' ability to coordinate is so far below expectations?

We see that as a main cause, yes. Increasingly, it also seems to us that certain permanent procedures and procedures are not practiced and developed enough, especially in concrete air operations. In NATO we have completely standardized procedures that a pilot learns from day one. We see weaknesses in the Russian Air Force. Overall, coordination between land and air forces and other domains does not seem to be working as smoothly as we would like.

The term "war of attrition" is often used in public at the moment. Do we see one there in the Donbass?

With this expression, a scenario from the First World War comes into my head, with barbed wire and trenches, where troops, weeks, months or even years face off. We don't see that in Donbass at the moment, it's a war of movement, albeit with significant casualties on both sides, which limit military capabilities. Both also have difficulties in substituting material. Western sanctions against Russia will no doubt affect the production of ammunition and spare parts.

Indeed? It was always said that the sanctions would only have an impact in the long term and would not have any direct impact on Russia's military capabilities. Could they now become a concrete factor after all?

"Could" is the correct term here. I can't tell you, this and that sanction ensures that the Panzer Division deployed at the front no longer gets any spare parts. But we are observing that Russian supplies are also finite - this can be seen from the use of weapon systems alone. You may remember how, in the first few days, the Russian troops deliberately used high-value weapons, such as precision missiles, to show technical superiority. You see less and less of their use.

1 Macron is arrested in Tarn over the accusations against... 2 European Union. Five questions about the text voted... 3 Bavaria: Study: Pine forests in the Franconian Jura... 4 Hesse: Frankfurt's power grid is being significantly... 5 Bavaria: Exhibition on the "merriment" of... 6 Battle for EU new car ban: Greens and FDP bicker over... 7 "The Russians shoot at everything": 100... 8 After lockdown easing: China's exports are rising... 9 Tricky season for parade boat: German "eight"... 10 First all-clear for the summer: Drosten: Corona situation... 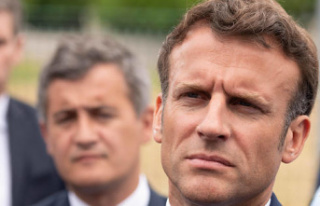 Macron is arrested in Tarn over the accusations against...