"Cleaning up suppurating rot": Trump gives the speech he never got the chance to give

He flirted with it almost constantly, now one thing is certain: Donald Trump wants to become US President again for the Republicans in 2024. 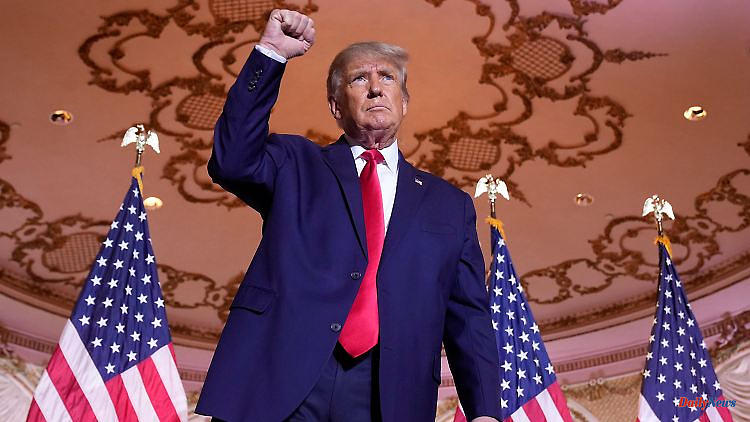 He flirted with it almost constantly, now one thing is certain: Donald Trump wants to become US President again for the Republicans in 2024. In Mar-a-Lago he is already making campaign promises in front of US citizens. The first stakes have been driven in.

Donald Trump, as serious as ever, rested and combative: The ex-president wants to go back to the White House. He has already submitted the papers, the guests in Mar-a-Lago cheer at his announcement, conservative commentators are electrified. "If it stays that way, he'll be unbeatable," says one of the conservative television stations Fox News with conviction.

It's early Tuesday evening, two hours until Donald Trump's "big announcement." Around the ex-president's residence in Mar-a-Lago, expensive cars push into the parking lots, the others have to squeeze past at the behest of the police. The first US television stations are already broadcasting live from inside the property in southern Florida.

Two bridges lead from the mainland over to Palm Beach, about 200 followers are spread out on them. The few public parking spaces are full, some blocked off by the police. Trump flags flutter in the wind. "Those who stand by President Trump" reads a banner behind which a large group of his supporters have gathered. A pickup with huge MAGA LEDs roars past them. Others stand at the entrance and wave to those who arrive. Invited guests and the media aren't the only ones anticipating an announcement of the Republican re-election.

Meanwhile, on the television sets in the USA, people can be seen jostling in the hall overloaded with gold, when Fox News announces: A moment ago Donald Trump submitted the documents for his application to the authorities. Joe Biden, on the other hand, says the newsreader, was "dazed and confused" at the Asia summit. But there is so much to do in the world, where is he? At least not in the center of interest of the US audience. This is Trump.

At 9 p.m. sharp, commentator Sean Hannity takes over; one who speaks regularly on the phone with the ex-president. The anthem "God bless the USA" is played in Mar-a-Lago, and Melania and Donald stride toward the podium at the line, "I'm proud to be an American," with a serious, almost statesmanlike expression. The ex-head of state waves a little, thanks him - and initially sticks surprisingly strictly to his teleprompter.

The difference between the written word and its conversational tone has never been overheard. His tone is slightly different. Trump says the same things he did as president, but less aggressively and with the knowledge that he remains the most influential Republican politician even when he is out of office. He looks rested and confident.

Trump first lists what he considers to be the achievements of his first presidency. So everything: nothing less than peace in the world, the best economy in the world, the southern border was sealed, he had all the dangerous countries in the world under control, globalization stopped and so on and so forth. He throws superlatives around and it sounds like he wants to rewrite the past, but add a question: Why was I actually voted out? The "big announcement" that his supporters have been waiting for for a week is also the speech that Trump was never allowed to give in front of national television audiences after his defeat.

It lasts until 9:22 p.m. when Trump triggers a sentence of great cheering in the hall: "In order to make America great and glorious again, I hereby announce my candidacy for the presidency of the United States." After that, the host becomes more relaxed and more often goes into his typically chatty campaign style. In doing so, he declares himself selfless, since he is merely fulfilling his duty as a US citizen to defend his country. He doesn't like the fact that he has to be a politician to do it.

Trump announced his application very early. Probably to plant his flag in the Republican field. Lest anyone in Congress think of backing down now. Because the House of Representatives will be re-elected in two years. Everyone will think twice before giving up Trump for someone else.

It will be extremely difficult for any potential competitor to get past Trump in 2024. Maybe a few will try anyway: Mike Pence, for example, Trump's vice president in the White House, who broke up with him after the storm on the Capitol on January 6, 2021, could be among them. Ron DeSantis, governor of Florida and the big intra-party winner of the midterm elections, is also being traded as a likely candidate.

In the second part of the speech, the ex-president explains what is allegedly so bad in the country because of the two years with Democrats in power. The southern border has been "erased" and millions of people are flocking north, bringing drugs with them. Inflation destroys everything, the streets of the big cities are full of blood because of the violence there. The chaotic withdrawal from Afghanistan was extremely shameful for the US military and Biden was toying with the risk of a third world war with nuclear weapons.

"We're here today to say: It doesn't have to be like this," Trump announced. "Our country can't stand another four years like that." Then he will also change from a savior to a representative of the supposedly unheard broad population. "I am your voice," he introduces himself. "It won't be mine, it will be our campaign, everyone together." He makes election promises to the veterans, wants to override Biden's historic climate package, since nuclear weapons are much more dangerous than a little higher sea level.

Trump wants to create "peace through strength" like he did in his first presidency. But the biggest threat, he points out, is from within. "We have to clean up the oozing rot in Washington D.C. and will dismantle the state within the state (the so-called deep state, editor's note)." The mandates of members of Congress would also have to be limited, and campaign donations by ex-members would have to be banned. For all these remarks, Trump receives a lot of applause. "From now until Election Day 2024, I will fight like never before," he promises. "I'm starting because we haven't reached the summit yet."

Even while Trump is still talking - for example about Angela Merkel and a failed German energy transition, which should be the reason for the USA to go back to fossil fuels - Sean Hannity verbally intervenes on Fox News and asks interlocutors about their opinion. Most of them are overflowing with enthusiasm.

After more than an hour, the "big announcement" is over, Trump waves and thanks. The Republicans, with him as the most important face, are disappointed with the result of the midterm elections. But Trump sharpened his themes for this most important speech in almost two years, garnished them with a little selflessness and a different tone. Is that enough to be "unbeatable" in 2024?

1 Next finals defeat: Rafael Nadal goes under at the... 2 DFB chef on Müller and rice pudding: "There... 3 After Werner, Nkunku also injured: The next RB star... 4 Tax tips at the end of the year: This is how you can... 5 Strongest variant of the pick-up: Ford Ranger Raptor... 6 Mecklenburg-Western Pomerania: man sets fire to balcony:... 7 Hesse: 300,000 euros in damage in a barn fire: cattle... 8 Thuringia: Cloudy and rainy Wednesday in Thuringia 9 Thuringia: negotiation of a special ticket for young... 10 Thuringia: Thuringia's Sports Minister Holter... 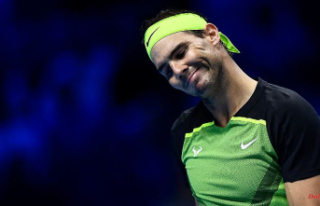 Next finals defeat: Rafael Nadal goes under at the...