Discussion on the Ukraine war: Citizens welcome Baerbock with shouts of bravo

At the open day, the chancellor and his ministers will answer visitors' questions. 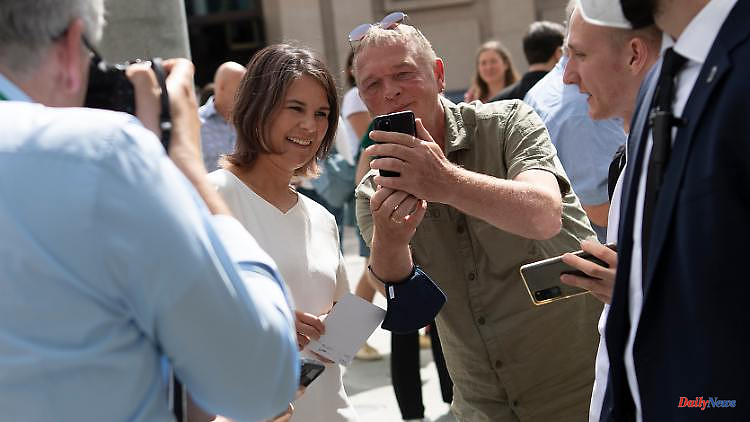 At the open day, the chancellor and his ministers will answer visitors' questions. Foreign Minister Baerbock received a lot of applause and cheers at Question Time. She defends arms sales to Ukraine. Chancellor Scholz emphasizes "that the war must not escalate".

Foreign Minister Annalena Baerbock has defended German arms deliveries to support Ukraine in the fight against Russia's war of aggression. Russian President Vladimir Putin refuses to negotiate the simplest of issues, such as international humanitarian law, and there is no response to attempts at mediation, criticized Baerbock at the Federal Foreign Office at the federal government's open day in Berlin. A citizen had previously asked what was being done to end the war diplomatically beyond the supply of arms. Chancellor Olaf Scholz also defended the federal government's approach to arms deliveries during the public dialogue in the Chancellery.

Baerbock was received with great applause and cheers for the hour-long discussion with citizens in the completely overcrowded Weltsaal of the Federal Foreign Office. Even with their answers, there was always loud applause from the scene.

If an end to the war cannot be reached through negotiations at the moment, "then we have the choice of either doing nothing," said the Greens politician. "Or we say we provide military support so that further Russian advances can be prevented." In the current situation, she thinks this is the only path we can take, "however terrible it is. Because the alternative would be to simply abandon millions of people to their fate." One cannot “simply take responsibility for this”.

When asked by a citizen whether Germany was providing sufficient support to the Ukrainian government, Baerbock said the federal government was doing "what other countries are doing." Many weapons have already been delivered, for example from the Bundeswehr stocks. But it's not about a competition as to who delivers the most and who is worse and better. Together, the democratic countries must do their best to support Ukraine. "It's about protecting human life in Ukraine," said the minister. The federal government is trying to do this to the best of its conscience with what it has and without becoming a party to the war itself.

In the Chancellery, Scholz made it clear during the citizens' discussion: Germany will continue to provide Ukraine "with what it needs for its defense". But it is also about "ensuring that there is no escalation of the war". Russian President Vladimir Putin planned this war long before the invasion began, he added.

"This is a war that Putin, Russia, started, and clearly with the intention of conquering his neighboring country - I think that was the original goal," Scholz told a citizen. She had asked about a strategy for ending the war that Russia started on February 24th. Russia is currently concerned with gaining territory in eastern Ukraine, said Scholz. But it's not even certain that it will stay that way.

Giving in is not a sensible strategy. "Putin actually had the idea of ​​swiping a felt-tip pen across the European landscape and then saying, 'That's mine and that's yours,'" said the Chancellor. He added: "It doesn't work that way." Scholz announced that he would not end the dialogue with Putin. The rule here is that "one must be clear and not allow oneself to be intimidated".

1 Nestled in the table basement: EL winner Frankfurt... 2 DSV: "There are cases every day": More victims... 3 Successor to the German idol: Boll conqueror Qiu is... 4 Lots of close-up vision: does school make children... 5 Mecklenburg-Western Pomerania: The north derby in... 6 Hesse: 62-year-old died after an apartment fire 7 North Rhine-Westphalia: Fish kills in the Halterner... 8 Saxony: 400,000 visitors at the Dresden city festival... 9 North Rhine-Westphalia: "Not crowned with success":... 10 Saxony-Anhalt: 20 cows gone astray in the dark 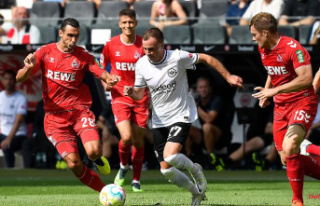