In Lviv, Ukraine, UN Secretary-General Guterres and Turkish President Erdogan are exploring the possibilities for further diplomacy between Kyiv and Moscow. 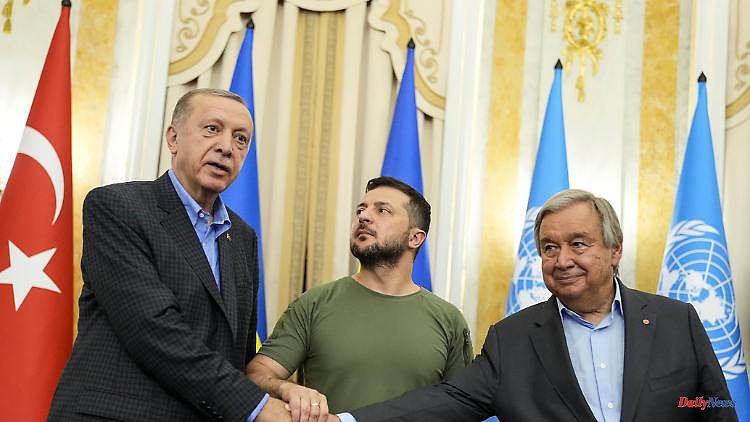 In Lviv, Ukraine, UN Secretary-General Guterres and Turkish President Erdogan are exploring the possibilities for further diplomacy between Kyiv and Moscow. However, President Zelenskyy makes it clear that only the Russian withdrawal will bring about peace.

Almost six months after Russia invaded neighboring Ukraine, international diplomatic efforts to end the war are intensifying. The success of the negotiations with the grain agreement in July is "only the beginning" of a positive dynamic, said UN Secretary-General António Guterres after a meeting with the Presidents of Ukraine and Turkey, Volodymyr Zelenskyj and Recep Tayyip Erdogan, in Lviv, Ukraine.

Erdogan reiterated his hope for a diplomatic solution. "I continue to believe that the war will eventually end at the negotiating table." Selenskyj and Guterres also see it that way, Erdogan said, according to the Turkish presidential palace. The war brought countless deaths, massive destruction and displacement, as well as dramatic human rights violations, Guterres said, according to the United Nations. "People need peace," he warned.

The meeting in Lviv in the west of the country was an opportunity for the United Nations and Turkey to explore a negotiated solution with Ukraine. However, according to Ukrainian media reports, Zelenskyj made it clear that talks would only be possible after the Russian troops had withdrawn from the illegally occupied areas. Foreign Minister Dmytro Kuleba said nobody in Lviv urged Ukraine to make concessions to Russia. The Russian side was not represented at the summit.

The situation in the Zaporizhia nuclear power plant, which was occupied by Russian troops, was also discussed in the talks. There has been shelling there for weeks - Russia and Ukraine are blaming each other for it. After the three-way summit, Guterres again called for the withdrawal of all troops around Europe's largest nuclear power plant. "The area must be demilitarized." Any possible damage to the nuclear power plant is "suicide". Erdogan also warned of a nuclear catastrophe: "We don't want to experience another Chernobyl."

Even before Guterres' speech, Russia had described calls for demilitarization as "unacceptable". This would make the facility even more vulnerable to attacks, a spokesman for the Russian Foreign Ministry said in Moscow. The Russian occupiers accused the Ukrainian leadership of planning an attack on the nuclear power plant for Friday. For its part, Kyiv warned of a possible Russian act of sabotage.

An international mission is to investigate an attack on the Olenivka prison camp near Donetsk, as Guterres announced. About 50 Ukrainian prisoners of war were killed in the attack in late July. Kyiv blamed Russia for the mass murder, and research by foreign experts and the media also came to the same conclusion. Moscow, on the other hand, accused Ukrainian troops of shelling the prison camp. 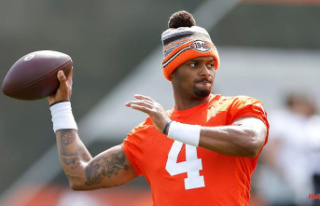