For the first time, Olaf Scholz gives a summer interview as Federal Chancellor. 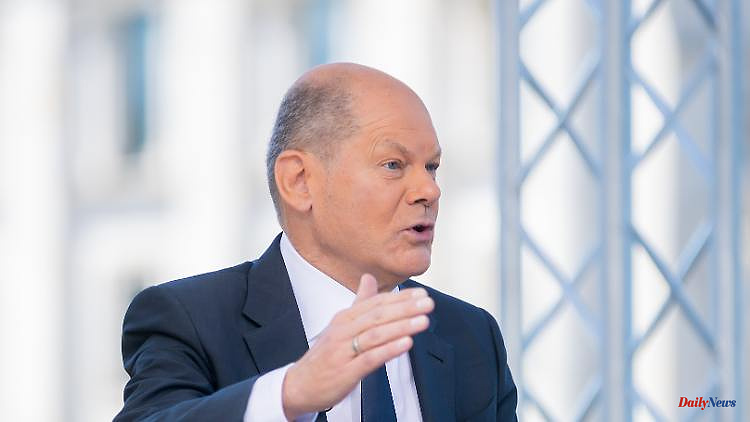 For the first time, Olaf Scholz gives a summer interview as Federal Chancellor. The head of government is calm but focused. Price increases and poverty in the country worried him, says Scholz. But he has a plan - and it's not the one that was reported for a week.

The traditional summer interviews with the Chancellor were among the smaller highlights of reporting in the last few years of the Merkel government. Not because the chancellor always had something exciting to share, but at least journalists were given the opportunity to have lengthy discussions with the German head of government. Olaf Scholz's first summer interview as chancellor doesn't really fall into this category because the social democrat launched a veritable communication offensive in late spring after initial criticism of his reticence. However, a few weeks ago it was still primarily about war and peace in Ukraine and the rest of Europe. The focus is increasingly on the question of what the federal government can do to counter widespread existential fears and concerns about social decline.

At the beginning of the program, the Federal Chancellor provided evidence that he knew the prices for butter and strawberries, so he had an idea of ​​the problems faced by consumers. About the explosion in energy prices and other living costs, Scholz said: "This is social explosives," adopting a formulation by ARD journalist Tina Hassel. He is very concerned about this because many people can hardly bear the additional heating costs of several hundred euros. But Scholz is not a politician per se who likes to talk about the seriousness of problems and emotionally weighs challenges, as Federal Minister of Economics Robert Habeck tends to do. "It's not enough to find words," Scholz warned off when asked about the drama of the whole thing. It is now a matter of the federal government doing everything that is necessary to ensure that the energy supply works, said Scholz.

Because governing politicians, like doctors, should never appear helpless in a crisis, the Federal Chancellor has called for "concerted action", based on historical examples from recent Federal Republican history. On Monday, trade unions, employers' associations and experts are to discuss with the government how they can counter the loss of purchasing power for consumers and at the same time galloping price increases for companies. It's about setting up a "process" in which "everyone in Germany hooks up again," said Scholz. It was the rather nebulous promise to the patient that the treatment options had not yet been exhausted, without going into detail.

On the other hand, reputable doctors do not promise miracles even in moments of greatest concern. "I don't want to anticipate what the results will be," said Scholz and, as a precaution, dampened expectations that agreements could be announced tomorrow. He wants to "establish the debate among the social partners (...) in the long term," said Scholz. Regarding the demands of the newly elected chairwoman of the German Trade Union Confederation, Yasmin Fahimi, for a price cap for basic energy consumption, the chancellor said: "We will discuss all questions."

And one more thing to reassure the patient: It is not true that he only has one prescription in the drawer. Scholz denied reports that the federal government wanted to propose tax-free one-off payments instead of high wage agreements. He only praised corresponding agreements, such as those in the chemical industry. "Nobody is suggesting that the actual wage increases should not happen because of this," said the Chancellor. This is an "invention" of the media. According to this reading, he has even more ideas up his sleeve. But it could also be that after a week of constant criticism from the unions, the chancellor's main concern is to get the debate going again. Even before the meeting on Monday, the fronts between unions and employers have become somewhat hardened.

Scholz also remained vague when it came to a further relief package. The resolutions of the second relief package should first take effect over the summer. In fact, the energy price flat rate, the one-off child supplement and the cost savings through the 9-euro ticket will only reach people in these weeks. But because the self-employed, students and pensioners have been left out, there is already pressure in the boiler. Especially since there is just as little sign of an end to the energy crisis as there is of a ceasefire in Ukraine.

On the contrary: more than ever, the federal government is preparing for Putin to permanently shut off the gas supply to Europe this summer. Scholz, however, avoids getting people in the mood for even more gloomy scenarios than they are at the moment during the summer interview. Likewise with Corona: The federal government is doing everything necessary. "There shouldn't be any more school closures and I don't think we need a lockdown like we've had in recent years," said Scholz about the coming autumn and winter. A return of the mask requirement indoors, on the other hand, remains possible: “I think that one has to assume that the mask will play a bigger role in autumn and winter than it does now.”

When it comes to the major issues of the Ukraine war and the pandemic, Scholz seems to be particularly concerned with the message that he has things in view and under control. In a good mood, freshly groomed and in a chic anthracite-colored suit, Scholz gives the impression of being at peace with himself. Scholz consistently takes the criticisms brought to him by individual citizens in clips as confirmation that he is already taking care of all the important things. Scholz rejected criticism of his appearance and the accusation of arrogance towards media representatives - as at the G7 summit: "I don't think that's the case, and that's why I don't share the assessment," he countered Hassel's question as to whether the accusation of arrogance.

Scholz also answered the subsequent questions that viewers were able to ask live on YouTube and Facebook on Sunday morning and live on YouTube and Facebook - more than 5000 according to ARD - in a good mood. When it came to the Ukraine war, Scholz spoke unusually frankly about his phone calls with Putin: "When I talk to Putin, I always say to him: 'Remember: the sanctions - admittedly they were not very strong - that came after the annexation of Crimea they are all still there. That also applies to the sanctions that we imposed after the instigated uprising in the east of the Donbass. But the sanctions that we have now imposed on Russia will remain in place. The idea of ​​a dictated peace is absurd .You have to focus on getting a fair deal with Ukraine.'"

He answered the question apparently asked by many Internet users about the timing of cannabis legalization with the prospect of 2023 or 2024, at least "not at the end of the legislative period". A speed limit will not come because there is no agreement within the coalition, and the 9-euro ticket will not be extended beyond August.

He considers the title Scholzomat to be outdated and Scholz counters Smurf comparisons with the information that he has bought a Smurf figure himself and has since received some as gifts. It's hard to imagine that the chancellor's private study is draped with little blue men. Maybe you don't want to know exactly, like the fact that Scholz prefers warm showers to cold ones - expressed when asked about his energy-saving behavior. Scholz takes care not to talk people into it too much, and the impression remains that he would appreciate it if nobody talked him into it either. According to the message after eight months in office, he has everything under control. 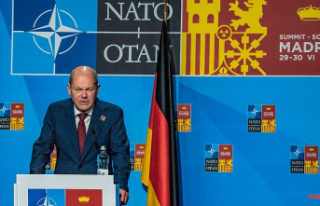