general a D. Lahl in an interview: "The tank howitzer could make a huge difference"

Kersten Lahl spent 41 years in the Bundeswehr, in the Ministry of Defence, was adjutant and military advisor to Federal President Richard von Weizsäcker and headed the Federal Security Academy. 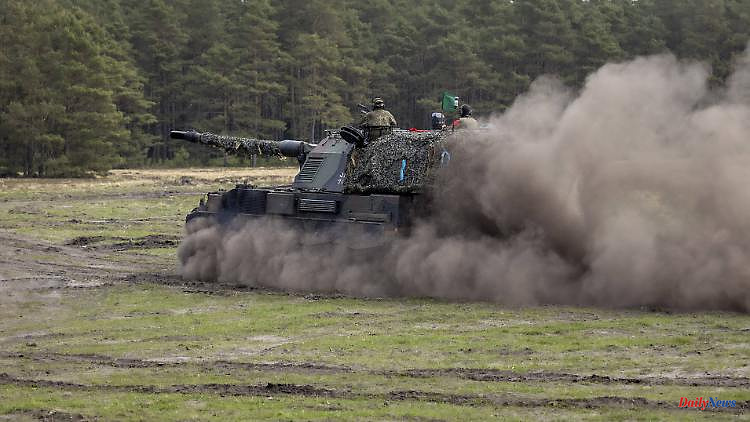 Kersten Lahl spent 41 years in the Bundeswehr, in the Ministry of Defence, was adjutant and military advisor to Federal President Richard von Weizsäcker and headed the Federal Security Academy. In an interview with ntv.de, Lieutenant General a. D., what difference the Panzerhaubitze 2000 makes in Ukraine, why he does not fear a third world war and sees no reason for holding back arms deliveries.

ntv.de: How did you see Scholz's visit to Kyiv?

Kersten Lahl: The most important aspect for me was that an excellent signal of the unity of Europe was sent out. It was great that Macron, Draghi and Scholz came together.

That's on top of that, but the three European heavyweights are particularly important and they are Germany, France and Italy. The second is the message that the prospects of Ukraine joining the EU are extremely positive and that this has been publicly announced. Another message is indirectly linked to this: namely, to give Ukraine everything it needs in its fight against Russia. You can't give someone the prospect of joining and at the same time say: We don't care how you protect yourself until then. I think this indirect message is very important.

Of course it goes in that direction. Although I have to say that I'm extremely careful with the terms "victory" and "defeat", I'm extremely reluctant to use them myself. And I think the opposite way of saying it is better: Ukraine must not lose and Russia must not win.

The chancellor does the same. Why not just say: we want Ukraine to win?

Because everyone has a different interpretation of what "winning" means. "Winning" and "losing" are terms where you have to be clear about what you mean by them. Can a country like Russia, one of the two largest nuclear powers in the world, actually lose? They can lose in view of their intentions in Ukraine, that's true. But overall, verbally aiming for Russia's defeat, I think is superfluous and also dangerous. That only pours more oil on the fire. But I readily admit that this is a question of feeling and interpretation. In any case, I'm reluctant to do so myself.

But not because you think that the word defeat implies that Ukrainian or even NATO troops could invade Russia and eventually be in Moscow?

Oh, that's completely unrealistic, and everyone knows that. In fact, Ukraine could never do it, and NATO would not be politically able to do so. It would never achieve the necessary unanimity, so it is de facto incapable of such attacks. Therefore, the Russian talk about its own security interests, which are endangered by NATO, is essentially just a pretext.

The Ukrainians report that they are running out of old Soviet artillery ammunition while the new Western weapons are not yet there. Many speak of a very critical phase. How do you see it?

I see it similarly, as far as one can judge from the outside. One could say that Ukraine is at a critical threshold, a kind of turning point. Both sides are pretty exhausted and need to find new strength. In such a situation, the question is always who has the better reserves. It seems that the Russians have more up their sleeve at the moment. Whether the arms deliveries from western Ukraine will help in the foreseeable future remains to be seen.

On the one hand we see Russian successes. On the other hand, it is said that the Russians will soon run out of breath. How does that fit together?

After the miserable failure of their attack in the first months of the war, the Russian troops are now proceeding extremely cautiously and with little risk, but with brute force. I do think that they too have problems, especially with regard to logistics. We're talking about a very slow campaign of conquest. The question is what Ukraine can do to counter this. Will it succeed militarily, at least locally, in taking the initiative, sealing off incursions and launching significant counterattacks? Apparently Ukraine can hardly do that right now, which is why it absolutely needs help from outside. Otherwise defeat is only a matter of time.

What difference do the German heavy weapons like the Panzerhaubitze 2000, Gepard and Mars rocket launchers make?

They make a difference because, combined, they allow the forces to take the initiative I mentioned while keeping Russian artillery at bay. Heavy weapons in particular, which guarantee not only firepower but also protected mobility, are what matters now.

But is that enough quantity? Twelve pieces of the tank howitzer are to be delivered.

Of course, these are not numbers that would make me euphoric. But I also have to say: none of us know what was delivered and what will be delivered. Anyway, I don't know, and if I did, I wouldn't say it. We are all well advised not to make these things public. Otherwise, such measures could be circumvented very quickly.

But when the Panzerhaubitze 2000 faces Russian artillery, how superior is it?

In terms of range and accuracy, it is significantly better than what can be seen on the Russian side. But it's also about ammunition, such as those with homing warheads. So there will also be the question of which ammunition will be supplied. I don't want to talk about the game changer right away, but it could make a huge difference.

When it comes to arms deliveries, the debate revolves around the question: why aren't we delivering more? Leopard 1 tanks are no longer in service, and the Bundeswehr wants to phase out the Marder. How do you see it?

One must primarily look at what the armaments industry has in stock or can provide quickly. Materially, the Bundeswehr itself is in such a deplorable state that one can hardly justify taking away what little it still has.

But the Ukrainians are still fighting against the country that poses the only threat.

Yes, but who can guarantee that this threat will continue to focus on Ukraine? I also don't believe that Putin intends to attack the Baltic States in the foreseeable future. But no one can rule out such a scenario developing out of the Ukraine war. And so we need the appropriate deterrent. When the army inspector tweeted on the day of the Russian attack that his army was "blank," that was a statement that left nothing to be desired in terms of clarity. With the Bundeswehr, we Germans have a great responsibility for stability throughout Europe. We are miles away from that and we must not jeopardize that any further.

Marders and Leopard 1 tanks still stand in the much-cited arms industry yard. But apparently there is not the political will to deliver.

We Germans have always been very cautious about delivering arms to crisis areas. But with a view to the Ukraine, we have said goodbye to this dogma for good reasons. The decision was made. So I can only plead for delivering what is available now. I don't see any objective reason for restraint and constant new concerns. The distinction between offensive and defensive, between heavy and light weapons is artificial. This discussion does not lead further in the matter. You have to deliver what Ukraine needs to successfully defend itself now. Too late is of no use.

Couldn't too many guns also provoke Russia? Doesn't that mean a bigger conflict?

I cannot follow the thesis of a provocation at all. Why should it be a provocation to help a country that has been the victim of an attack that violates international law and is trying to defend itself? Fulfilling moral obligations cannot be a provocation for anyone. The scope of these arms deliveries is clearly and exclusively aimed at the defense of Ukraine. Russia itself is not threatened in any way. Only the success of the Russian attack is threatened. And I can only say: That's a good thing.

Isn't there a risk of a third world war?

Of course nobody can rule that out. But I think this specter of a third world war was deliberately fueled. This is deliberate rhetorical intimidation. This is intended to put pressure on our public and thus on politics. This talk was always there during the Cold War. Just think of the slogan "rather red than dead". To conform to this would mean giving in to the law of the stronger. That's never been a good strategy.

Should Putin be able to save face?

Putin is the aggressor, but he probably realized long ago how wrong he was. Anyway, he's the only one who can end the war. Ukraine cannot do that, at least not on acceptable terms. The weapons deliveries are the basic requirement for diplomacy to have a chance at all. For Putin will not agree to any concessions as long as he has the feeling that he can still achieve more militarily. Only when the costs of his war of aggression outweigh the rewards will he be willing to sit down at the negotiating table. Then you have to look for solutions. And they can also be face-saving, why not?

Do you have an assessment of how long the war could last and what a solution might look like?

I would have to be a prophet. I am far from speculating. One thing is certain for me: Only when Ukraine is able to withstand the Russian attacks, then there is a good chance that it will be ended. How long this will take also depends on our support for Ukraine. I would also not get involved in a discussion about the future of Donbass and Crimea. I think it's perfectly legitimate for Ukraine to make it clear that this is their territory. But what happens in the end is another question entirely. First, the guns must be silent.

1 Chancellor off duty: Merkel: "Now I'm free" 2 Hit by Danish missiles: Ukraine reports sinking of... 3 For the first time in corporate history: Apple employees... 4 "No relevant damage": FDP opens new debate... 5 From sweet potatoes to dividends: things that are... 6 Incentives for industry: Habeck is planning further... 7 Bitcoin below $18,000: crypto industry in a downward... 8 Restaurants remain closed: There are no waiters in... 9 Between Inflation and Recession: What's left... 10 $20,000 mark broken: Bitcoin price continues to collapse 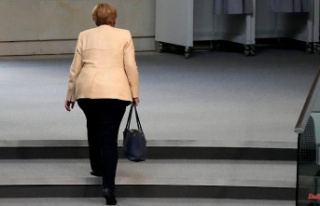