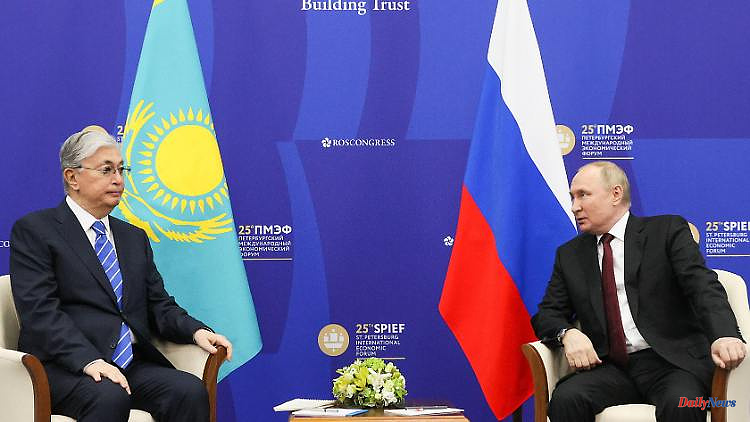 Kazakhstan usually has good relations with Russia. But the former Soviet republic does not support the Russian attack on Ukraine, instead even courting the EU with possible gas and oil deals. What is the government of the world's largest landlocked country planning?

Most people in Western Europe and the USA associate Kazakhstan primarily with one fictional person: Borat, the fictional character created by British comedian Sacha Baron Cohen. 16 years after the theatrical premiere of the first film, everyone is talking about Kazakhstan again. This time with a serious background: President Qassym-Jomart Tokayev dared to publicly contradict Vladimir Putin and Russia.

What happened? In mid-June, Tokayev will be the guest of honor on the stage at the international economic forum in St. Petersburg, right next to the Russian president. The boss of the state broadcaster RT, which is loyal to the Kremlin, asked Tokayev how he felt about the special military operation in Ukraine. His answer is surprising: for good reasons, his country does not recognize Taiwan, Kosovo, Abkhazia or South Ossetia. And this principle also applies to quasi-state areas such as Donetsk and Luhansk.

The answer is unexpected since Russia is Kazakhstan's main ally. The largest landlocked country in the world shares a 7,000-kilometer border with Russia in the north. "To describe the relationship as close would be an understatement," says the Viennese political scientist and Central Asia expert Hannes Meissner in the ntv podcast "Learned again." The country's legacy is "politically, socio-economically, socially, ethnically, economically and security-politically characterized by the common past with Russia in the Soviet Union. And before that, the country was also part of the Tsarist Empire, which shapes the country to this day."

Russia is by far the country's most important import partner and Kazakhstan's third largest export country. There are many migrant workers leaving Kazakhstan for Russia. The return flow of foreign exchange from Russia to Kazakhstan is an important factor in prosperity.

The two countries are also closely linked in terms of security policy. In the Collective Security Treaty Organization (CSTO). The military alliance is led by Russia, five other Eastern European and Central Asian countries are members, including Kazakhstan.

Ethnic and cultural there are close ties due to the common history. 18 percent of the 19 million Kazakh citizens are Russians, and in northern Kazakhstan they even make up the majority of the population. All the more astonishing is President Tokayev's objection at the economic forum in St. Petersburg, which Kazakh Foreign Minister Muchtar Tleuberdi joined shortly afterwards. In view of the Ukraine war, this calls on the world to destroy all nuclear weapons by 2045.

Kazakhstan is playing "a highly dangerous game," says Meissner. He suspects that Tokayev wants to make himself independent and expand internationally. The ties with Russia are "designed to the detriment of Kazakhstan". That is why the country is trying to find new partners. In recent years, contracts have increasingly been signed with Western partners, reports the political scientist. "Culturally, a rapprochement with Turkey was sought. The western alphabet is currently being introduced at the expense of the Cyrillic."

Kazakhstan is also characterized by a "balanced foreign policy". Meissner analyzes that Russia's war of aggression in Ukraine reinforces this. "This dominant, hegemonic claim that Russia is asserting in Ukraine is leading to fears in Kazakhstan. There are fears of losing national sovereignty."

Kazakhstan is currently more dependent on Russia than ever before. Earlier this year, when bloody riots broke out in the country, President Tokayev asked the CSTO for help. The military alliance sent 2,500 so-called "peacekeepers" to Kazakhstan - foreign soldiers who brutally cracked down on the protests. Most of them came from Russia. Without Russian help, Kazakh President Tokayev would most likely not be in office.

Apparently, Russia wants to make that clear to its smaller neighbors at the moment. The Kremlin stopped the export of Kazakh oil in the port of Novorossiysk on the Black Sea, presumably as a tit-for-tat for Tokayev's statements. Allegedly, objects were found in the port area, which could be mines from the Second World War. A few days later, a court in southern Russia ruled that the terminal had to shut down operations for 30 days. The stop was justified with possible environmental damage, reported the Russian news agency Interfax. This is a hard blow for Kazakhstan: 80 percent of its oil exports go through Novorossiysk.

Even Putin himself was clearly not pleased with Tokayev's statements in St. Petersburg. You could see that in the little things: Putin kept mumbling about the name of his Kazakh counterpart - a popular mind game of the Russian president.

Ultimately, Kazakhstan's path of tender confrontation does not mean an ideological departure from Russia. Instead, the huge country is daring to adopt a dual strategy: quietly criticizing Russia in order to gain international respect. However, the big neighbor is not alienated entirely in order to continue to benefit from relations with Russia. "Kazakhstan has been trying for a long time to implement a certain seesaw policy in terms of economic policy. On the one hand, there are great dependencies and ties with Russia. But on the other hand, attempts have also been made to cooperate more closely with China and also with the West."

The Kazakhs' greatest bargaining chip is their wealth of resources. The country's oil and gas reserves are huge. After Russia and the USA, the Central Asian state is Germany's third largest oil supplier. Globally, only 13 countries produce more oil and only 21 countries more natural gas than Kazakhstan.

And Kazakhstan wants to further increase its share of the world market. President Tokayev promised oil and gas supplies to the European Union. Kazakhstan is "ready to use its potential to stabilize the situation on the world and European markets," he said in a phone call with EU Council President Charles Michel. Kazakhstan could form a "buffer zone" to compensate for imbalances in the distribution of energy between East and West and between North and South. Tokayev wants to strengthen his own independence, suggesting alternative transport corridors such as pipelines through the Caspian Sea that would bypass Russia.

The Kazakh President's gaze is also directed towards domestic politics. Tokayev wants to consolidate his power. Since taking office three years ago, he has presented himself as a reformer campaigning for a "new Kazakhstan." Politically, however, no reforms can be identified. The country is an autocracy, there are no free elections, no real opposition, freedom of expression is restricted and corruption is the order of the day.

At the same time, since the start of the Ukraine war, the population has been afraid that one day Russia could also invade Kazakhstan. The large proportion of Russians in Kazakhstan's population could be a welcome excuse for Putin to use armed force to protect the Russian minority, they fear. In the past, Russian nationalists have called for the Russian-dominated north of Kazakhstan to be annexed.

The Russian attack on Ukraine shows that Kazakhstan is right to be nervous, says expert Meissner. Unlike the Transnistrian conflict in Moldova, the border disputes over Abkhazia and South Ossetia in Georgia or the Nagorno-Karabakh dispute between Armenia and Azerbaijan, there is "no conflict inherited from the Soviet era" in Kazakhstan, as Meissner puts it. But that doesn't have to mean anything, because Putin "provoked a new conflict for the first time" in eastern Ukraine.

"Russia has created a lever in Ukraine that has been used since 2014 and has recently escalated massively, contrary to many expectations. This shows how quickly a conflict can be created and escalated. This danger also exists in Kazakhstan," concludes Meissner. "Of course that makes you nervous."

President Tokayev knows that too. That's why he won't completely turn Kazakhstan away from Russia. He also made that clear at the Economic Forum in St. Petersburg: He sees the future of his country primarily in the Eurasian Economic Union with Russia, Belarus, Armenia and Kyrgyzstan - and with strong ties to China. That sounds more like Putin's will. 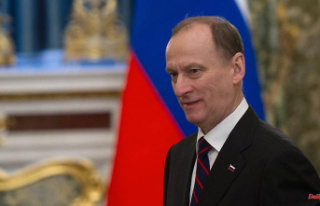