"Good news" from the front: Russian troops surprised near Kharkiv

With its counter-offensive in the south of the country, the Ukrainian army penetrated as far as the town of Balaklija and blocked a road to the supply post of the Russian armed forces in Kupjansk. With its counter-offensive in the south of the country, the Ukrainian army penetrated as far as the town of Balaklija and blocked a road to the supply post of the Russian armed forces in Kupjansk. According to reports, the Russians were not prepared for this. President Zelenskyy thanks three brigades.

According to various reports, Russian troops were apparently surprised by the advance of Ukrainian forces in the fighting in the Ukrainian region of Kharkiv. The Russians admitted that the town of Balaklija was surrounded, the Ukrainian presidential adviser Oleksiy Arestovych explained on YouTube. In fact, the Ukrainian troops have advanced much further and have meanwhile also blocked the road to Kupjansk.

He was referring to a central supply post for Russian troops further east in the country. Yuri Podoliak, a Ukrainian often quoted by pro-Russian officials, wrote on Telegram: "The enemy has had considerable success at Balakliya with relatively few forces...it looks as if the Russian forces missed this advance and awaited it elsewhere." There have been heavy losses. Balakliia is located between Kharkiv and Izyum, a city with an important railway junction for Russian supplies.

Meanwhile, Ukrainian President Volodymyr Zelenskyy has barely covertly confirmed his armed forces' counter-offensive in the east of the country. There is "good news from the Kharkiv region this week," he said in his video speech on Wednesday evening. The Ukrainians have every reason to be proud of their army in view of the successful recapture of several towns.

"Now is not the time to name this or that settlement to which the Ukrainian flag will return," said the head of state. He did, however, list three Army brigades that had distinguished themselves. He also thanked two brigades involved in the attack in southern Ukraine in the Kherson region. "Every success of our military in one direction or another changes the situation along the entire front in Ukraine's favour," said Zelenskyy. 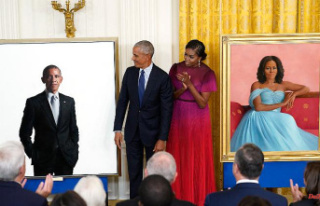 Trump did not invite to the ceremony: the Obamas are...