In front of Saudi embassy: Washington names street after Khashoggi

In 2018, journalist Jamal Khashoggi was brutally murdered in the Saudi Arabian consulate in Istanbul. 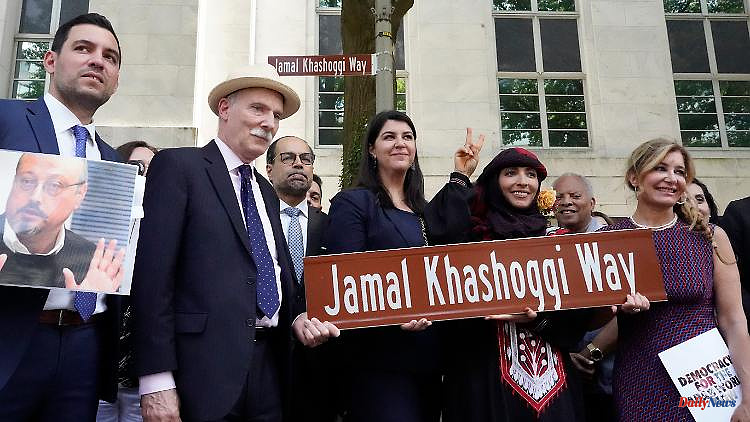 In 2018, journalist Jamal Khashoggi was brutally murdered in the Saudi Arabian consulate in Istanbul. Shortly before President Joe Biden's planned trip to Saudi Arabia, the US capital commemorated the murder and sent a signal: The Saudi embassy is now on the "Jamal Khashoggi Way".

In the run-up to the meeting between US President Joe Biden and Saudi Arabian Crown Prince Mohammed bin Salman, the US capital Washington sent a "reminder" to Riyadh: the street opposite the Saudi Arabian embassy has been called "Jamal Khashoggi Way" since Wednesday, named after the journalist murdered on behalf of the crown prince in 2018, according to US secret services. The street will serve as a "memorial so that the memory of Jamal Khashoggi can never be stifled," said City Council Chairman Phil Mendelson.

The renaming came a day after the US President's trip to Saudi Arabia was announced in mid-July. Tawakkol Karman, a Yemeni activist and 2011 Nobel Peace Prize laureate, said at the ceremony that the president's upcoming visit to Saudi Arabia "means that Biden has abandoned his commitment to defending human rights around the world."

Sarah Leah Whitson, of the Khashoggi-founded human rights organization Democracy for the Arab World Now, said she wanted to remind the people "hiding" behind the embassy's doors "every day, every hour, every minute" that they are fighting for the "murder of our friend" were responsible. He had to die because he "dared to oppose the tyranny of Mohammed bin Salman".

Before his election, Biden had said that Saudi Arabia should be treated like a "pariah" state because of the Khashoggi assassination. After he took office, the government released an intelligence report that the Saudi Arabian crown prince and de facto ruler approved Khashoggi's assassination in 2018. Riyadh rejects this and assures that the Saudi Arabian perpetrators acted on their own initiative. In view of the global energy crisis caused by the Ukraine war, Biden recently changed his line on the oil-rich state.

Khashoggi, a columnist for the Washington Post, was murdered on October 2, 2018 in the Saudi Arabian consulate in Istanbul. He had an appointment there to prepare for the wedding with his fiancée, a Turkish citizen. According to official information from Turkey and the USA, a 15-man commando from Saudi Arabia was waiting in the representation, murdered him, dismembered his body and made the remains disappear.

It's not the first time the Washington City Council has used street names in international protest. The Russian embassy is located in Boris Nemtsov Plaza, named after the opposition politician who was killed within sight of the Kremlin in 2015. Efforts to name the street in front of the Chinese embassy after the Chinese dissident Liu Xiaobo, who was awarded the Nobel Peace Prize in 2010, failed due to opposition from Beijing. Liu died in Chinese custody in 2017.

1 "Fan of liver sausage": Medvedev blasphemes... 2 Back Market is singled out because of 'deceptive... 3 Heavy fighting for Sieverodonetsk: Separatists promise... 4 The federal government paid 21.5 million euros: process... 5 Drome. Etoile-sur-Rhone: an agricultural fire destroys... 6 UN refugee commissioner on RTL: "The humanitarian... 7 Sexual harassment: How a day at Lake Garda turned... 8 "Still a risk": After Scholz's arrival:... 9 Rocket launchers until the beginning of August: Lambrecht... 10 Together with Macron and Draghi: Scholz is on his... 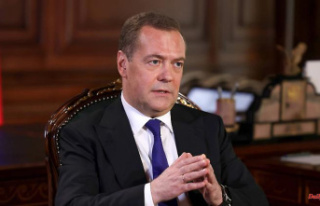