Midterm election snapshot: Joe Biden is as unpopular as Trump

Incidentally, the US congressional elections provide a kind of interim balance in the middle of the US president's term of office. 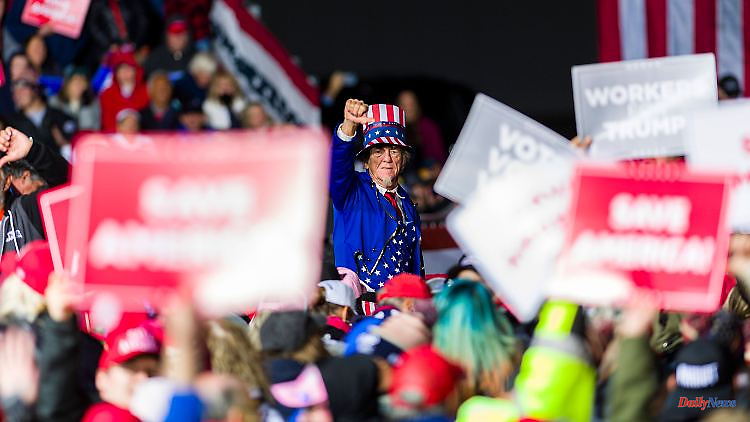 Incidentally, the US congressional elections provide a kind of interim balance in the middle of the US president's term of office. Two years after the change in the White House, losses are becoming apparent for the Democrats. How good or bad is US President Biden in comparison to his predecessor?

Registered voters can use the so-called midterms to settle accounts with the governing party. The president's camp regularly has to accept setbacks. The extent of the loss of votes is of enormous importance: the balance of power in Congress determines the president's political leeway.

US President Joe Biden was elected in November 2020 and has been in office since the beginning of 2021: Since then, he has been losing support in the polls. His approval ratings fell just a few months after the change in the White House. According to US pollsters, less than half of the US citizens surveyed have been satisfied with Biden's work since autumn last year.

Polls are an integral part of the political debate in the United States. Dozens of demoscopy institutes compete for attention. New results, some of which differ widely, are published regularly. Partisan positions are not always easy to identify for outsiders. For a better overview, the US data and statistics site "FiveThirtyEight" therefore provides a much-noticed guideline in which the assessments of the pollsters are brought together using a method that is documented in detail.

The result of the calculations are average survey values, which not only show the so-called "Approval Rating" of the incumbent, but also enable comparisons based on approval ratings and rejection with his predecessors. US President Joe Biden is doing worse in public opinion than Donald Trump at the same time almost two years after taking office.

Biden only received an average approval rate of 41.4 percent among the US citizens surveyed. Donald Trump, on the other hand, was at 41.8 percent shortly before the midterm elections on November 6, 2018, just slightly above Biden's values. On average, 52.8 percent of those surveyed rejected the populist Republican Trump at the time. With his successor Biden, it was 53.4 percent.

Trump's lead is certainly anything but huge. However, the comparison shows that Biden is nowhere near as good in the US public as he was at the beginning of his presidency. With the storming of the Capitol on January 6, 2021, Trump's poll numbers plummeted. Until well into the summer of last year, the Democrats could still count on a clear majority for President Biden in the surveys. Since then, however, a lot has happened. From autumn 2021, Biden's approval ratings melted away.

The Democrat Biden, who started with an ambitious reform agenda, was confronted with a lot of headwind from the start. The result of the 2020 presidential election was far from being as clear as Obama's former vice president could have wished. In the US Senate, it was enough for the defeated Republicans to have a blocking minority: Biden's opponents in the opposition were able to thwart important legislative projects.

Despite a few setbacks, Biden was able to record a few successes: After a long struggle, the hard-fought infrastructure package got through in the US Congress. Last summer, Biden finally got the green light for his ambitious climate protection and social package worth billions. For many Americans - and apparently also for many supporters of the Democrats - these plans are apparently not enough.

The 79-year-old president has not yet succeeded in overcoming the deep divisions in the US public. The legal processing of the Trump years is far from complete. In addition, there were a number of severe political setbacks on the part of the Democrats. The reform aimed at by Biden to combat police violence against blacks failed in the Senate, as did the reform of the electoral law and a tightening of US gun laws. In many areas, Biden comes across as much paler, quieter, and softer than his blustering, ruthless predecessor. Trump, on the other hand, continues to use every opportunity to attract media attention.

1 Midterms in the USA: The election results could be... 2 Bokk finds his ice hockey luck: The German super talent... 3 Criticism of Infantino's proximity to Qatar:... 4 After admission of abuse: Preliminary investigations... 5 Large-scale operation for the politician's son:... 6 Neighbors are not amused: "Harry Potter"... 7 Sometimes frivolous, sometimes arm in arm: Shayk and... 8 There are these grants: How to finance fertility treatment? 9 North Rhine-Westphalia: NRW budget for 2023 is to... 10 North Rhine-Westphalia: Significant increase in corruption... 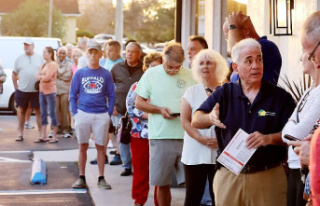 Midterms in the USA: The election results could be...