The EU is calling for ambitious climate protection goals by 2030 - and the countries are moving along. 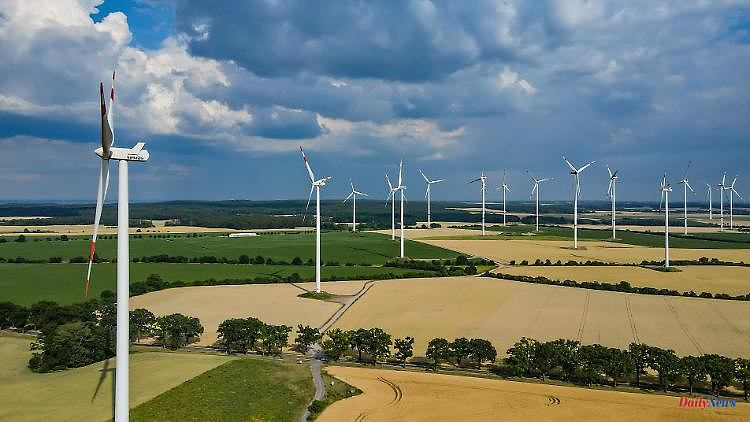 The EU is calling for ambitious climate protection goals by 2030 - and the countries are moving along. However, because of the Russian attack, the Commission has upped the ante. But that will only be discussed later.

According to the Federal Ministry of Economics, the EU countries have agreed on more ambitious goals for climate protection. Specifically, the expansion target for renewable energies was raised and binding energy savings targets agreed. Further measures will be put to the vote on Tuesday. According to the agreement, the share of renewable energies is to be expanded to 40 percent by 2030. So far, 32 percent has been targeted. There are also individual targets for the areas of heat, transport, buildings and industry. German Climate Protection Minister Robert Habeck said the expansion will now be seen as a matter of paramount European public interest. That will provide more speed.

"For the first time, agreement has been reached on a binding EU energy efficiency target," said Habeck after consultations with the European energy ministers in Luxembourg. Compared to a forecast, primary and final energy consumption in the EU must now be reduced by nine percent by 2030. If targets are missed, EU members have specific obligations to make improvements, according to the Ministry of Economic Affairs. So far, these targets have not been binding.

The EU Commission proposed the targets that the countries have now agreed on last year. Because of the Russian attack on Ukraine, which has significantly pushed up the prices for fossil fuels, savings and the expansion of renewables are becoming increasingly important. In order to become less dependent on Russian energy supplies, the EU Commission actually wants to be even more ambitious - with an expansion target for renewables of 45 percent and a savings target of 13 percent.

First, however, the original values ​​were voted on. The new targets are likely to come on the table later this year when the final laws are voted on with the EU Parliament, diplomats said.

Tomorrow, Tuesday, the environment ministers will discuss other parts of the European climate package, with which the EU wants to reduce its greenhouse gas emissions by at least 55 percent by 2030 compared to 1990 levels. Climate neutrality is to be achieved by 2050. Among other things, CO2 emissions trading in the EU will be discussed as well as the planned end of combustion engines by 2035.

According to Habeck, Germany wants to help each other with several Eastern European EU countries in the event of an energy crisis. He had signed a declaration of intent, said the Green politician before the start of the consultations in Luxembourg. In view of the significantly reduced gas supplies from Russia, it is about mutual solidarity. Filling up the storage facilities in Germany should not lead to a crisis in other countries. According to the Ministry of Economic Affairs, Germany, the Czech Republic, Poland, Slovakia, Hungary and Austria have signed the declaration of intent. It is about a starting point for regional measures that should be used in the event of a crisis.