Police operation is being investigated: Biden mourns in Uvalde

It's a quiet visit: US President Biden travels to the community of Uvalde, where a gunman killed 21 people, most of them children, at an elementary school last week. 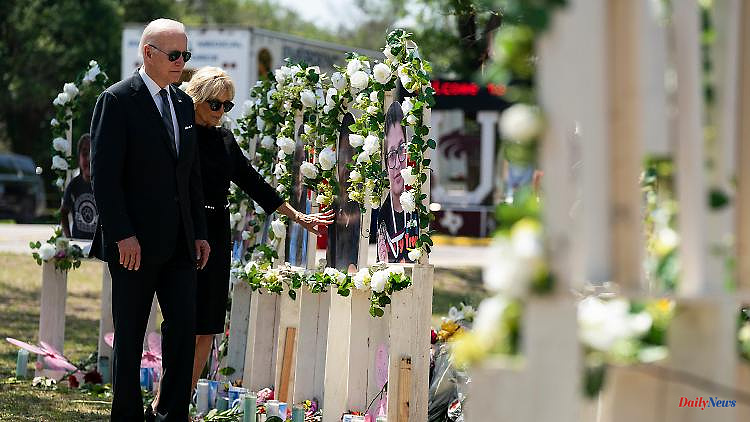 It's a quiet visit: US President Biden travels to the community of Uvalde, where a gunman killed 21 people, most of them children, at an elementary school last week. No public statement, but a long meeting with the families of the victims. They are very angry with the police.

After the horrific massacre at an elementary school in the state of Texas, US President Joe Biden visited the affected community of Uvalde. Biden and his wife Jill spent several hours with relatives of the victims and survivors of the shooting. The meeting took place behind closed doors. The Bidens laid flowers outside the school where an 18-year-old gunman shot dead 19 children and two teachers on Tuesday. They also met emergency services and attended a service in the community, which is in shock and angry at the dramatic failures of the police operation. The US Department of Justice now wants to investigate the actions of the police.

The attacker locked himself in with students and teachers in two connected classrooms on Tuesday and caused the bloodbath there with an assault rifle. 17 other people were injured. The perpetrator was shot dead by the police in the end. So far nothing is known about his motive.

On Friday, the public safety agency in Texas presented new investigation results that caused bewilderment: According to this, 19 police officers were posted in the hallway in front of the classroom at an early stage, in which the gunman had holed up with teachers and students. For more than 45 minutes, however, the officers made no attempts to enter the room and stop the gunman. Instead, they waited for reinforcements, although children from inside the room made numerous frantic calls to the police for help. More than 75 minutes after the shooter opened fire, emergency services entered the classroom and killed the gunman.

The new findings on the process caused an outcry, especially among the families of the victims. Several relatives accused the police that they could have saved lives if they had not waited so long. Texas Public Safety Director Steven McCraw himself admitted on Friday that officers made a mistake not to enter the classroom earlier. "It was the wrong decision. Period," he said. "There is no excuse for that."

The US Department of Justice announced on Sunday that it would investigate the police's actions. Uvalde Mayor Don McLaughlin asked for it. The aim of the investigation is to create an independent report on the actions of the security authorities that day and to draw lessons for other attacks. It is therefore not about possible legal consequences for individual officials.

The President and First Lady met paramedics, psychologists, firefighters and police officers in addition to families of the victims in Uvalde. Biden has not yet commented on the findings of the police operation. The Democrat made no public statement during his visit to Uvalde. Biden only responded to a call. When someone in the crowd shouted, "Do something," Biden replied, "We will."

The Uvalde killing spree has fueled the debate about tightening gun laws in the United States. For years, many Republicans have opposed stricter regulations, such as a ban on assault rifles. The US has long struggled with massive levels of gun violence. In 2020, gun injuries were the number one killer of children and adolescents in the United States, ahead of traffic accidents.

1 Crash in front of the Himalayas: wreckage of missing... 2 Baden-Württemberg: Motorcyclist collides head-on... 3 Baden-Württemberg: the driver drives into the bus... 4 Baden-Württemberg: five-year-old shaken to death?... 5 Bavaria: Accident with 17 injured: Two people seriously... 6 Bayern: How many annoy us this year? Forecast for... 7 Hesse: Everything you need to know about the election... 8 North Rhine-Westphalia: Ruhr-Uni Bochum offers activities... 9 North Rhine-Westphalia: Neanderthal Tower opens in... 10 Saxony-Anhalt: Doctoral centers at the universities... 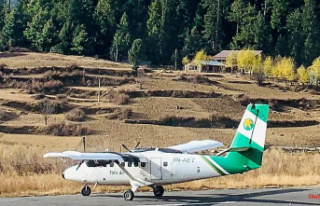 Crash in front of the Himalayas: wreckage of missing...