Polish help from Berlin: donations for the Ukraine between pictures from Auschwitz

Actually, the Polish Pilecki Institute is a research and educational institution. 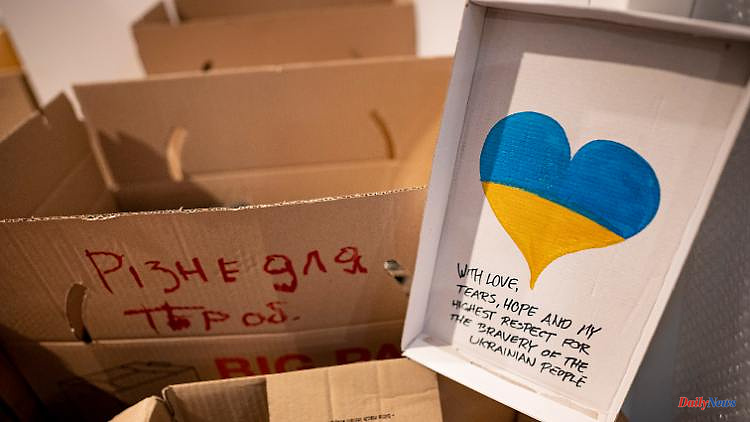 Actually, the Polish Pilecki Institute is a research and educational institution. But in the exhibition rooms of his Berlin branch, between pictures from the Auschwitz concentration camp, donations for the invaded country have been collected since the Russian invasion of the Ukraine.

Since September 2019, the Berlin branch of the Pilecki Institute has been located at Pariser Platz in Berlin, right next to the French embassy and with an impressive view of the Brandenburg Gate. It is a state research and educational institution from Poland, which was established in its current form in 2018 by decision of the Polish Parliament. The task of the institution is not only classic archive and research work, but also the dissemination of knowledge about the National Socialist and Communist crimes to which Poland fell victim. The Berlin branch not only works with the Federal Archives, but also organizes panel discussions and offers advanced training seminars for German teachers.

The focal point of the Berlin premises, however, is the exhibition about Witold Pilecki, the institute's namesake, who tragically symbolizes the fate of Poland in the 20th century. As a resistance fighter, Pilecki allowed himself to be arrested in a raid in September 1940 under a false name in order to get to the Auschwitz concentration camp - he is the only known person who did this. "The Volunteer", as a biography of Witold Pilecki by the English author Jack Fairweather, which was also published in German in October of this year, organized a resistance group in the concentration camp and wrote reports on the crimes committed by the Germans in Auschwitz. Thanks to his courage, the Western Allies had initial information about what was happening in the concentration camp from 1941, from which Pilecki and some of his comrades-in-arms managed to escape in 1943.

With the end of World War II, Pilecki fell victim to the next totalitarian system. In 1948 he was sentenced to death by the new communist rulers, dependent on the Soviet Union, for alleged espionage at a show trial. Only after the political change in 1989 could his tragic fate be remembered again.

There are currently no visitors in the Berlin exhibition rooms who want to find out more about Pilecki's fate. Despite the information boards, photos and exhibits documenting the horrific everyday life in the Auschwitz concentration camp, it feels more like a warehouse. Parcels with first-aid kits in olive green are stacked up under a sign that reads "Anyone who speaks Polish is our enemy." Not far from the rooms above the hospital camp in Auschwitz, backpacks with medical equipment are put together, each of which has a total value of 2000 euros. Other parts of the exhibition serve as storage for medicines and medical technology - all donations that are urgently needed in Ukraine, collected by Ukrainians living in Berlin and their organizations such as Ukraine-Hilfe Berlin e.V., the Plast Scout Association or the Vitsche Association and since the end of February in Pilecki Institute to be prepared for transport to Ukraine.

"We also enclose letters that we write here in the packages. We don't know who is receiving them, but we want to encourage people in Ukraine," says Krystyna Grusak. The young Ukrainian, who has been living in Berlin for several years and works as a nurse, is one of the Ukrainian volunteers who are now spending their free time at the Pilecki Institute packing up relief supplies for their home country. A task that is no longer so easy. "In the beginning there was still a lot of willingness to donate," says Krystyna Grusak. "But now it's waning and we have to pay for some products out of our own pockets to complete aid shipments."

The work of the volunteers is not only made more difficult by a decreasing willingness to donate, but also by some of the donations themselves. "Hospitals are also among our donors. But some medicines or other medical products that they give us have already expired. We have to do that first sort out and often end up with almost empty hands."

The Pilecki Institute not only collects donations for Ukraine. The exhibition "Ukraine. War in Europe" has been on display in the entrance area of ​​the institute since mid-May. This replaced the "Voices of Ukraine" show, which consisted of display boards on which Ukrainians reported on their experiences of the war. This exhibition was put together by Vitsche Berlin, a civil society organization of Ukrainians living in the capital. "We organized Voices of Ukraine on the fly by asking friends and friends of friends to document their experiences," says Anton Dorokh. The artist from Donetsk has lived in Berlin since 2014 and is one of the co-initiators of Vitsche.

The collaboration between Vitsche and the Pilecki Institute is not limited to this exhibition. Press photographer Maks Levin, who was murdered by Russian soldiers in March, was commemorated by organizing a small exhibition of his war photographs within a few days, which also raised money for his family. In May, Vitsche made a public appearance with a sensational film intended to initiate a more differentiated culture of remembrance of the Second World War in Germany. "This is already our second home here," says Dorokh, who, in view of the war in his home country, describes the cooperation with the Berlin branch of the Pilecki Institute as "metaphorical".

The fact that the Pilecki Institute has become a center for Ukrainians living in Berlin is due to another neighboring country of Ukraine: Belarus. "After the protests against the dictator Aleksandr Lukashenko began in Belarus in August 2020, we decided to give the local opposition a voice here in Berlin with exhibitions and events," reports Hanna Radziejowska, director of the Pilecki Institute in Berlin. "This is how the cooperation with RAZAM e.V., an organization of Belarusians living in Germany, came about. After the Russian invasion of Ukraine, we asked them whether they had contact with Ukrainians living here. And just a few days after the start of the war, the first donations were made here collected for the Ukraine and the first events were held," says Radziejowska. "Since our exhibition about Witold Pilecki is being redesigned, we also have rooms that can be used.

As Radziejowska emphasizes, there are other reasons why the Polish Pilecki Institute opened its doors to Ukrainians and Belarusians living in Berlin. "Poland, Belarus and Ukraine have a long history together. That creates understanding and connects." Even if it must be added that this common history was not always easy. However, these difficult common historical relationships play no role today. Svetlana Tikhonovskaya, the symbolic figure of the Belarusian opposition, has meanwhile taken part in three discussion events at the Pilecki Institute at the invitation of her compatriots living in Berlin. Kateryna Sukhomlynova, a Mariupol city deputy and survivor who has made it her mission to educate the public about the atrocities committed by the Russian army in the Sea of ​​Azov port city that has been under siege for weeks, recounted her horrifying experiences here. "I'm grateful for this opportunity," says Sukhomlynova.

At the same time, the question arises as to why no German institution came up with the idea of ​​offering Ukrainians living in Germany space and a platform and thus making them visible. Especially in Berlin, where many of them live. But that doesn't mean that German institutions aren't doing anything for Ukraine. In order to save Ukrainian archives, the Federal Archives donated acid-free boxes and scanners, which were delivered to Ukraine in May. The fundraising campaign was organized by the Pilecki Institute in cooperation with RAZAM e.V. and Ukrainian organizations in Germany. 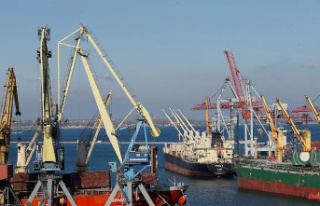 Escort for port of Odessa: Moscow seems to release...