While the first convoy of relief supplies reaches Cherson, the Ukrainian President visits the battered city. 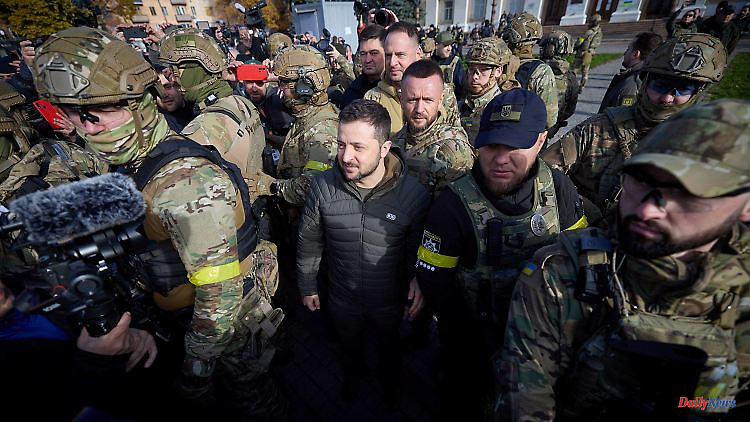 While the first convoy of relief supplies reaches Cherson, the Ukrainian President visits the battered city. The residents' parades of joy speak for themselves, says Selenskyj. At the same time, Ukrainians are documenting war crimes and arresting collaborators.

Ukrainian President Volodymyr Zelenskyy visited the city of Cherson in the south of the country, which had been liberated from Russian occupation. "We're making progress," he told soldiers in front of an administration building where numerous civilians with Ukrainian flags had gathered. "We are ready for peace, for peace for our entire country." Zelenskyy thanked the western states for their continued support and emphasized that the delivery of US missiles in particular had made a big difference.

The reactions of the population to the arrival of Ukrainian troops in Kherson speak for themselves, Zelensky said. "Their reactions are not staged," he stressed. Since Friday, people in the city have greeted the approaching Ukrainian soldiers, sometimes frenetically. Russian forces had previously withdrawn to the east bank of the Dnipro River. It was the heaviest defeat for Russia since the war of aggression began on February 24. Cherson is one of four Ukrainian regions that the government in Moscow illegally annexed and declared part of the territory of the Russian Federation.

According to Zelenskyj, investigators in the recaptured parts of the Cherson region have so far uncovered more than 400 Russian war crimes. Bodies of soldiers and civilians were found. He also said in his video message every evening on Sunday that Russian soldiers and mercenaries would be arrested. The rule of law has been restored in 226 towns with a total of over 100,000 inhabitants.

Reuters spoke to local residents who experienced the Russian occupation. According to their reports, civilians were killed and abducted. Russia denies such allegations. The Ukrainian Defense Ministry said that 179 towns and 4,500 square kilometers along the Dnipro coast in the south of the country had been recaptured in the past few days. The General Staff said heavy fighting was continuing in the east in Lukansk and Donetsk. In both regions, several Russian attacks have been repelled in the past 24 hours.

At noon, the first UN humanitarian convoy reached the people of Kherson. On board were, among other things, food, drinking water, toiletries, kitchen utensils, bedding, warm blankets and solar lamps, as reported by the UN Emergency Relief Office OCHA in Geneva. A total of more than 6000 people were taken care of. A clinic receives medicines and materials to treat more than 1,000 patients.

According to Ukrainian information, around 80,000 of the city's 280,000 residents are still in the city. It was the first UN convoy to reach Kherson since Russia invaded and took the city in early March. According to the United Nations, Kherson has water and electricity shortages, markets lack food, and hospitals and doctors' offices don't have enough medicine. Further convoys are planned for the next few days. In other nearby villages that have already been liberated, more than 12,000 people have received humanitarian aid in recent weeks.

1 White House to meet in Bali: Biden and Xi condemn... 2 Soldiers moved from Cherson: Russian troops are now... 3 London advises caution: Wallace: If necessary, Moscow... 4 Excitement about blue tick: Musk fights Twitter feud... 5 The Edin-Terzic dilemma: Watzke's longing for... 6 Clap against the follower: Nadal goes down at the... 7 A mountain of bills?: Pay these five liabilities first 8 Labor law question: Do you always have to call in... 9 Saxony: Alleged perpetrator determined after theft... 10 North Rhine-Westphalia: carriage horses go through:... 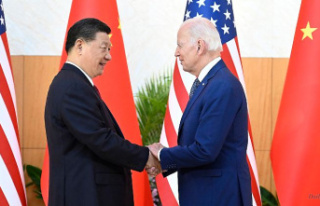 White House to meet in Bali: Biden and Xi condemn...