At a meeting with Russian "soldiers' mothers," President Putin presents himself as sensitive. 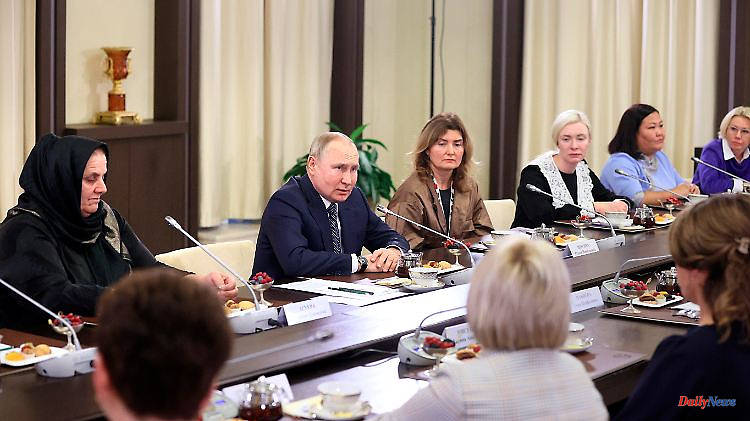 At a meeting with Russian "soldiers' mothers," President Putin presents himself as sensitive. His guests are said to be relatives of soldiers fighting in Ukraine. According to a media report, at least some are pro-government politicians and civil servants.

Nine months after Russia's war of aggression against Ukraine began, Kremlin chief Vladimir Putin presents himself as a caring and compassionate head of state at a meeting with alleged soldiers' mothers. "I want you to know that we share this pain with you and that we will of course do everything we can to ensure that you do not feel forgotten," Putin told the 17 women he met at his residence in Novo-Ogaryovo in Moscow area received. Relatives of these women were fighting in Ukraine, Russian propaganda media reports said. But whether that is true is questionable.

According to media reports, representatives of the Union of Soldiers' Mothers Committees - an internationally respected human rights organization - were not invited. No wonder, since the NGO founded in 1989, which denounces abuses in the Russian army, has fallen out of favor with the government in recent years and is being persecuted as a "foreign agent".

The recently founded "Council of Mothers and Wives" was not represented either. According to a report by the exile medium "Meduza", its founder Olga Tsukanova criticized the presidential administration for not having invited a single member of the organization. Tsukanova assumed that the participants in the meeting were "bogus mothers".

In fact, Russian opposition journalists were able to identify at least seven of the women present at Novo-Ogaryovo as pro-government officials and politicians. According to the medium Mozhem Objasnit, the photos include a Moscow deputy from the Kremlin party United Russia, a senior staff member of the All-Russian People's Front movement founded by Putin, and a member of the People's Chamber of the city of Orekhovo-Zuyevo. An employee of a nationalist organization that collects relief supplies for the mobilized is also there.

The woman sitting on Putin's left is, according to the report, Olesya Shigina. She is a director who makes orthodox and patriotic films and recently lived in France. Irina Tas-ool, head of the department for family, youth and sport in the administration of the Kaa-Khem district of the Republic of Tuva is one of Putin's "soldier mothers". It is not known whether relatives of these women are actually fighting in Ukraine.

According to "Mozhem Objasnit'", the woman on Putin's right is a representative of the Chechen "aristocracy", Sharadat Aguewa. Her sons, Ismail and Rustam Aguew, are actually serving in Ukraine. The two are high-ranking security officials and anything but simple soldiers. One is a battalion commander, the other head of a police department in Chechnya. The head of the Russian republic, Ramzan Kadyrov, has repeatedly referred to the latter as his "brother".

Nothing is known about the remaining ten women. It may be that their sons are really soldiers fighting in Ukraine and dying for Putin. These women may have found solace in the words of their President. After all, he promised them "everything possible" to "feel a shoulder at your side".

1 High tension for the round of 16: weakening England... 2 Saxony-Anhalt: Driver injured in an accident near... 3 Baden-Württemberg: Pedestrians hit the sidewalk and... 4 "Many complaints in Kyiv": Selenskyj hands... 5 Half orbit in six days: "Orion" capsule... 6 Saxony-Anhalt: Greens want to strengthen crafts in... 7 Saxony: Germany's start-up scene in Leipzig 8 Thuringia: Thuringian Left advises on Ramelow's... 9 Anti-Semites in Mar-a-Lago: Trump speaks of "uneventful"... 10 Three dead in Brazil: 16-year-old runs amok in two... 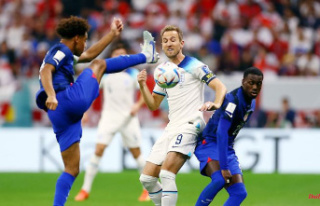 High tension for the round of 16: weakening England...