Scholz wants to "demystify": Why is the chancellor visiting a gas turbine?

Germany and Canada have been arguing with Russia over a gas turbine for months. 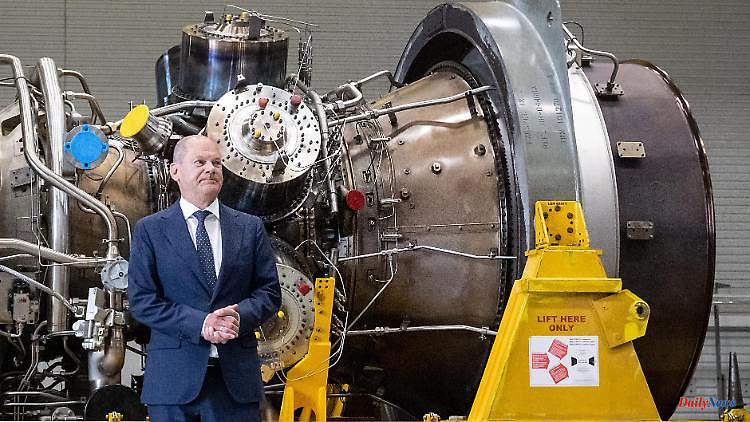 Germany and Canada have been arguing with Russia over a gas turbine for months. Chancellor Scholz is now visiting the component himself. In doing so, he wants to blow up the bluff of Kremlin boss Putin.

She's actually in Germany, that's probably the most important finding. In order to demonstrate that the now famous turbine can be delivered immediately, Chancellor Olaf Scholz traveled to Mülheim an der Ruhr. He wanted to "demystify" the debate, says Scholz as he stands next to this twelve-meter component. "The turbine is there, it can be delivered, someone just has to say: I want it, then it will be there very quickly." But this "someone" is not just anyone. Since June, the Russian state-owned company Gazprom has been gradually reducing gas supplies flowing through the Nord Stream 1 Baltic Sea pipeline to Germany. Again and again the reduction is justified by the lack of this turbine serviced in Canada and other technical problems.

From the point of view of the federal government, this is a lie. Economics Minister Robert Habeck said a few weeks ago that Russia is also using energy as a weapon. In this way, the amount of gas is reduced in order to drive up prices. "This strategy must not be successful," said the Green politician. That's why the federal government is trying to take every pretext out of the Kremlin - especially when it comes to the turbine. That should also signal Scholz's visit.

Most recently, the Russian state-owned company Gazprom refused to accept the component, citing Western sanctions and the lack of documents as the reason. Scholz replies: "There are no gas sanctions that prevent the use of turbines." Then it was said that documents from Siemens Energy, the manufacturer, were missing for commissioning. Its CEO also holds against it. "From our point of view, all papers have been prepared, as far as we can prepare them," says Christian Bruch. However, documents from Gazprom itself are still missing. Therefore, the turbine has not been able to be transported for over a week.

In principle, maintaining the turbine is a normal process, Bruch continues. Normally, the turbines are repaired in Canada and Gazprom replaces them as soon as a serviced component arrives. In the Russian compressor station in Portovaya there are "six such turbines plus two smaller ones". Five turbines are needed to fully utilize Nord Stream 1. Only one of them is currently running - "that's why we're at 20 percent" utilization of the pipeline, says the Siemens Energy boss. "From a technical point of view, we cannot understand why there should be no operational readiness."

Scholz sums up the turbine dilemma in one sentence. "It's hard for us to say, we'll take it to the port of St. Petersburg and unload it there on the quay edge and say: There's the part." Actually, she should have been in Russia a long time ago. According to information from the Russian business newspaper Kommersant, she arrived in Germany by cargo plane on July 17. Then it was to be transported by ship across the Baltic Sea to Finland and then overland to the Russian border. The planned further transport by ferry to Helsinki failed, it said.

It has been in Germany ever since. The fact that Russia has not yet accepted the component is like a demonstration for the traffic light coalition. After all, getting the component to Germany involved high political costs. The Canadian government had initially prohibited the transport because of the Russian sanctions. It was only under pressure from the German federal government that the component was approved. Prime Minister Justin Trudeau was heavily criticized by the Canadian opposition.

Because Ukraine feared that releasing the turbine would undermine the global sanctions regime against the Kremlin. The domestic political pressure on Trudeau was so great that Chancellor Scholz defended him in an interview with a Canadian medium. Standing in front of the turbine, he himself announces a state visit. Foreign Minister Annalena Baerbock is already in Canada, also to smooth things over. However, she did not travel to the capital Ottawa, but to Montreal - where the turbine was serviced.

But in addition to the "perfect" turbine, Scholz has a second message in his luggage. He is also asked that former Chancellor Gerhard Schröder had suggested Nord Stream 2 as the "simplest solution". Scholz, on the other hand, points out that the capacities of the existing pipelines, above all Nord Stream 1, are sufficient for Russia to be able to comply with its contracts with Europe. There was something else connected with his answer. According to Scholz, one thing must be clear: "We always have to expect that contracts will not be honored." For Germany, this means "that we have to understand that it's not enough to do everything right." The Russian war of aggression in Ukraine also means that "there are always some pretended reasons put forward that something is not working".

This is also shown by the Kremlin's reaction to Scholz's turbine visit. Gazprom still lacked the necessary papers, Kremlin spokesman Dmitry Peskov told the Interfax news agency in the afternoon. He also warned against sanctioning the turbine and possibly switching it off remotely in the end. Another machine is having problems, but technicians from a Siemens subsidiary "are in no hurry to fix it," the Kremlin spokesman claimed.

1 Back in the black for the first time: Lufthansa cuts... 2 Image change at Bayern: Hasan Salihamidžić: "I... 3 A gift for Putin: How the Serb Aleksandar Vučić... 4 Temperature Shock Needed: Heat wave does not affect... 5 Study on life expectancy: men do not live shorter... 6 Thuringia: serious theft in the supermarket in Bad... 7 Thuringia: AfD in survey the strongest force in Thuringia 8 30 bargains for your manager game 9 After the trip to Moscow: "Disgusting when former... 10 EU Court of Justice rejects – parents want to move... 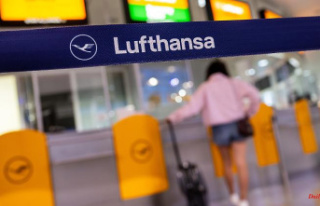 Back in the black for the first time: Lufthansa cuts...