Situation not under control: Why Putin can no longer win

What other options does Russia have in the war? It could continue bombing Ukrainian cities and destroying vital infrastructure. 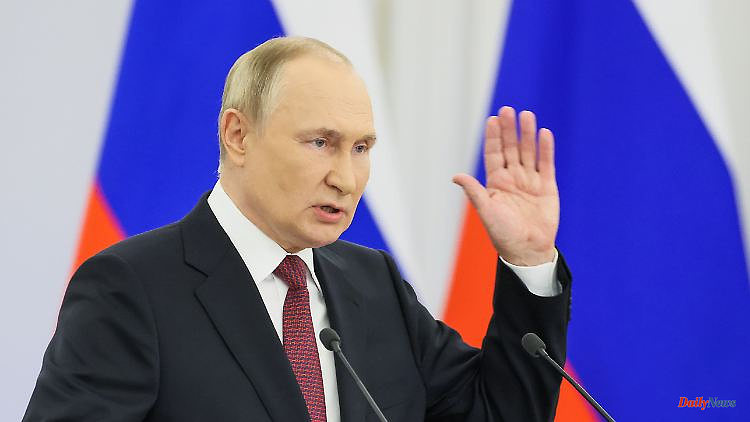 What other options does Russia have in the war? It could continue bombing Ukrainian cities and destroying vital infrastructure. But that doesn't bring victory - dropping an atomic bomb wouldn't bring that either.

According to the Russian news agency Interfax, more than 180 Russians who wanted to flee from being drafted into the army were recently apprehended on the border with neighboring Georgia. If the men didn't end up in prison, they'll have to go to the front and fight a battle they didn't want to be in. Hundreds of thousands were luckier and left Putin's empire in time. You are spared the carnage.

After the Russians had lost the strategically important city of Lyman, a video showing several Ukrainian soldiers in full gear including assault rifles made the rounds on the Internet. In Russian, they declared to the aggressor: "After seven months of war, you should have understood that we are not giving up a single meter of our country."

The contrast could not be greater. Here the Russians who are turning their backs on their country, there the Ukrainians who are fighting doggedly for every square kilometer of their homeland. Some are highly motivated and want to fight, others don't. In any case, the contrast highlights the mood in the populations of both countries and shows that many Russians have now understood that the "special operation" is war - a war that Russia may not lose, but can no longer win either .

The deficiencies in the warfare of the Russian army have been well known since the invasion of Ukraine. The Russian military, which until February 24, 2022 was hailed as the top army even by the secret services, turned out to be a force that was tactically based on the experiences of the Second World War. The losses are gigantic, the flexibility in tactics and command leadership, as shown by the Ukrainians, is unknown to the Russians. Bombing everything in a nutshell works in Syria, but not in Ukrainian cities. The weapons the Ukrainians have from the west are effective and reveal that technically Russia is still more backwoods than empire.

What is new is that the debacle is being openly discussed in Russia. After the defeat in Lyman, blogger and former head of PR for Duma Chairman Vyacheslav Volodin, Anastasiya Kashevarova, wrote to Defense Minister Sergei Shoigu and Chief of General Staff Valery Gerasimov: "Does the President know about the incidents? Who is reporting to him? Where is the equipment? Where are the Armata [tanks]? Where is everything? How did that happen? Bagged? Sold? Where did it go? Did it even exist?"

The questions show that Putin does not have the situation under control and - above all - Russia is finally confronted with itself and its deficits. Corruption also affects the army. Putin has pulled his supposed ace out of his sleeve and is sending hundreds of thousands of additional men to the front, which only means that his best forces are already worn out. A significant portion of the newly drafted men will end up as cannon fodder. Nothing indicates that they will fight highly motivated, especially since they don't know what for. Putin's crazy show of annexation in the Kremlin, when he declared territory - again lost - to be Russian soil, hasn't stopped the mass exodus of young men abroad.

What other options does Russia have? It could continue bombing Ukrainian cities, destroying vital infrastructure such as power plants, airports, and even hydroelectric dams. But that won't make the Russians more popular and will only make occupation more difficult. Militarily it brings little or nothing. Putin will not break the resistance of the Ukrainians with this. On the contrary, each bomb increases the willingness to resist. The Ukrainians do not want to be forcibly united with Russia, the government in Kyiv will not sign a capitulation.

The chances of Russia taking important cities like Kharkiv, Odessa and yet Kyiv are currently close to zero. Putin, who is now, like Hitler, also promoted himself to supreme commander, would have to bomb them all to rubble and ashes, which he is capable of doing. But because the Ukrainians will not give up even then, his troops would have to conquer the cities with enormous losses. If they are or would still be able to do so in terms of personnel, material and logistics.

Putin won't get rid of the war he started - the Ukrainians won't let the Russians rest. The war will cost the Russian treasury hundreds of billions of dollars in the long run, and the economy, which must be increasingly geared to war, will permanently lose hundreds of thousands of mainly male workers, which is likely to cause more damage than the sanctions of the West.

As long as Ukraine receives military aid from its allies, the Kremlin's desire to wipe out the neighboring country will remain a figment of his mind. If that hasn't already been completely clouded by the national frenzy that Putin himself has unleashed, he will have recognized his situation and may be considering deploying tactical nuclear weapons. If he really drops one, for example over the Black Sea or on a dam, the military benefit is small. The detonation of a nuclear weapon will spread fear and terror in the West, but at the same time pull it together. Because then Hungary and certainly Italy - the Russia course of the new government in Rome is still unclear - will no longer be able to support Putin.

The Chinese are said to have already explained to the warlord in the Kremlin that they "only" tolerate anything less than the use of a nuclear bomb. The Asian country must be careful that its economy does not collapse in the wake of a global recession. Social unrest is a nightmare for the Beijing government. The friendship with Russia doesn't go that far either.

The Americans and their allies have stated in no uncertain terms that a Russian attack on a NATO country would cross the red line. Apparently, the US has now also made it clear to Putin how they would react to an atomic bomb being dropped. Well-wired in Washington, ex-CIA chief David Petraeus, a former four-star general in the army, said NATO would then eliminate all Russian conventional forces "that we can identify on the battlefield in Ukraine, including the Crimea and every ship in the Black Sea". The other variant that is circulating goes like this: The US destroys the means of delivery as soon as its reconnaissance discovers that Russia is moving tactical nuclear weapons from their current location in the direction of intending to attack Ukraine.

If that were to happen, which is unlikely, Putin could strike back on NATO territory and World War IV would have begun. In an exchange of nuclear blows, nothing would be left of the earth - not even Russia, within whatever borders. Dropping an atomic bomb on Berlin or London would also be Putin's downfall. And that's exactly what a megalomaniac building an empire doesn't need.

1 Bavaria: Police as lifeguards at the Wiesn 2 Hesse: Stones thrown onto the bus damage the window... 3 Hesse: Day of German Unity is a day of hope 4 Bavaria: Three wrong-way drivers cause closures and... 5 "Putin is a fool": Russian soldiers talk... 6 The area has even gotten bigger: Gas is still leaking... 7 Patience required thanks to Ronaldo: Klopp desperately... 8 Phenomenon of ergophobia: How to combat fear of work 9 Mecklenburg-Western Pomerania: Right of way disregarded:... 10 Saxony: Growth in photovoltaic systems in Saxony since... 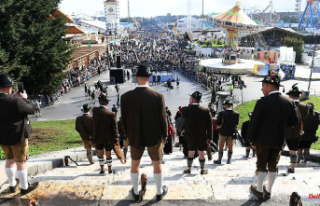 Bavaria: Police as lifeguards at the Wiesn