Speech at the ceremony in Goslar: Angela Merkel continues to make history

Former Chancellor Merkel appears as a keynote speaker at the city anniversary of Goslar. 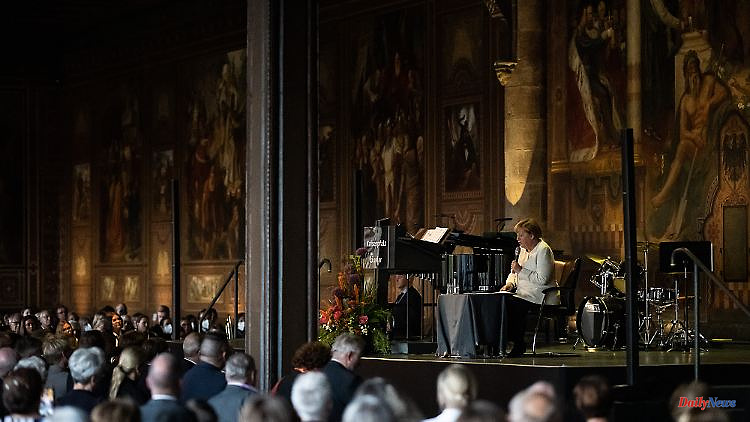 Former Chancellor Merkel appears as a keynote speaker at the city anniversary of Goslar. There she promotes a Russia policy that she herself once pursued and encourages the audience: with enough strength and confidence, this crisis can also be overcome.

Distinguished visitors in Goslar: The town on the Harz Mountains is celebrating its 1100th anniversary this year. Goslar has invited Angela Merkel to the central anniversary celebration in the former imperial palace. Since the traffic light has been in power, it has become quiet around the former Chancellor. After 16 years of permanent political service, vacation trips followed, and in the summer Merkel made public appearances for the first time. One of the comforts of retirement is being able to pick appointments yourself, she said in an interview. These are usually few and far between, but it was only on Tuesday evening that she honored her predecessor Helmut Kohl at the founding meeting of the foundation of the same name. Two days later we continue to Goslar.

A veritable event marathon has been held there since the beginning of the year. The Lower Saxony city is celebrating itself and its past under the motto "Where emperors lose their hearts". In the 11th century, the medieval aristocracy resided and debated in the Imperial Palace, which sits enthroned on a rise on the outskirts of the city centre. In 1992, UNESCO awarded the building World Heritage status.

The citizens, who came in their Sunday clothes, look forward to Merkel's appearance in the North German way. At the entrance, a gentleman in a suit said it was an honor that Merkel was visiting the city. His wife puts it into perspective: "But above all, it's about celebrating Goslar." Her husband does not place high demands on her speech either: "She's no longer chancellor. What can she say?" Nevertheless, there seems to be enough interest in Merkel's appearance in Goslar. In addition to the guests of honor, the city had provided 420 places for its residents, which were sold out after just under two days. Some who couldn't get hold of a ticket gather in a cluster at the entrance to the Kaiserpfalz to perhaps catch a glimpse of Merkel.

A little later, the Kaisersaal is full to bursting, from the meter-high murals, images of the Hohenzollerns watch over the audience, who chatter and shake hands - everyone knows each other. Goslar's best-known son, ex-vice chancellor Sigmar Gabriel, is among the guests of honor in the front row, with the Indonesian ambassador next to him. When Merkel enters the hall, those present stand up, standing ovations, SPD Mayor Urte Schwerdtner accompanies them to the square. Merkel seems relaxed, chats again and again with her seat neighbor Birgit Honé, the Lower Saxony Minister for Federal and European Affairs, also SPD. A feel-good date.

However, it is visibly difficult for her to climb the stairs onto the stage, she says she is struggling with a "declining knee injury" and therefore gives her speech sitting down. It is her fifth visit to Goslar, the last time she visited the city with her former deputy Gabriel was in 2019, and she was impressed by its "historical beauty". "Not only emperors lose their hearts here," Merkel alludes to the anniversary slogan and gets a laugh. The 68-year-old pays tribute to Goslar's historical legacy and also emphasizes the political commitment at the municipal level, which is struggling with the "challenges" of this time. Merkel is swinging from the small to the big, reminiscent of the achievements of the recently deceased Queen Elizabeth II and Mikhail Gorbachev. With her death, "politically the 20th century is finally over". In this calculation, the former chancellor, who was in office from 2005 to 2021, would also have been politically active in the long 20th century.

Then Merkel talks about the Ukraine war, which represents a "profound caesura". Ever since the annexation of Crimea, but at the latest since February 24, Russia has committed a violation of international law that has not occurred in Europe since the end of the Second World War. But even if "staying power is required", work must continue "on a pan-European security architecture with the participation of Russia". She is repeating a position that she had formulated two days earlier.

Merkel says she does not want to get involved in political debates. She is clearly more concerned with the long lines of history - her own history, which she writes with her performances. After all, the Russia policy that she is promoting is one that she herself pursued -- with a result that is seen much more critically today than it was during her time in government. Germany currently has "no reason for complacency," said Merkel. With sufficient strength and confidence, however, this crisis can also be overcome. The audience considers her speech with frenetic applause. Merkel's own responsibility for the current situation is not an issue here.

Merkel's serious tones are followed by shallower ones, a jazz ensemble is already playing "You forgot the color film" by Nina Hagen. If the corresponding choice of songs caused general astonishment in their Great Tattoo, now nobody is surprised anymore, and so the audience on the western side of the former German-German border can also enjoy entertaining GDR nostalgia.

At the end of the formalities, Lord Mayor Schwerdtner thanks you for the "highlight of our city anniversary". The band performs the "Steigerlied", Merkel listens and applauds the soloists. She had previously apologized for her absence at the subsequent reception – her knee. Another ovation, then Merkel leaves the hall through the side entrance. A handful of onlookers are still waiting outside, hoping for one last look at the ex-Chancellor. If she's ever there. 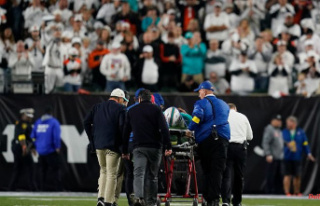 Second incident in a week: concern for NFL quarterback...