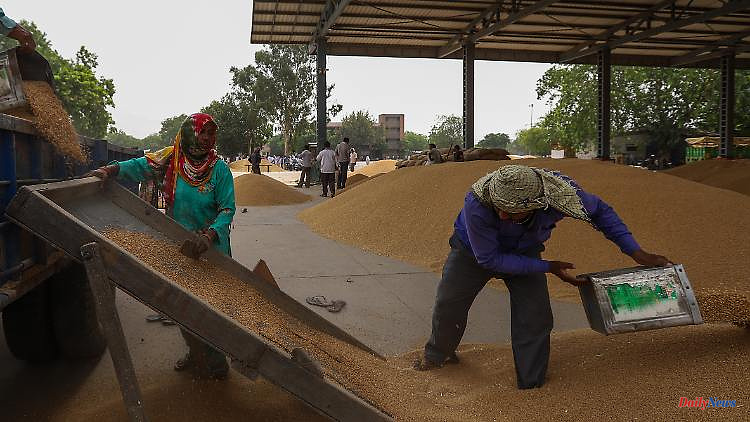 The global food crisis triggered by Russia's war of aggression in Ukraine is causing great tension - African representatives fear famine, India is restricting wheat exports. A solution is not in sight. But Turkey is ready to negotiate with Russia.

The Russian war of aggression in Ukraine is already making food more expensive in many countries. Rising energy costs are certainly contributing to this - but the blockade of wheat and grain exports from Ukraine also gives rise to fears of bottlenecks on the global food market. Not only are exports from Russia and Ukraine currently blocked, other countries are also introducing export restrictions for wheat. Representatives from Africa in particular fear bottlenecks after massive crop failures are expected on the continent this year. The Russian government blames the food crisis on the West and calls for an end to sanctions against Russia. Turkey is now ready to mediate in the struggle for grain exports from Ukraine.

India is now checking compliance with the wheat export restriction more closely. The Department of Foreign Trade instructed regional authorities to physically review all documents related to wheat exports, the Commerce Department said. It should thus close a back door and post-dated documents should be found.

India is the second largest wheat producer in the world after China, and an export ban that has been in place since mid-May has caused international uncertainty. Shortly thereafter, the ministry specified that there were exceptions, such as agreements made before the ban with a letter of credit or special permits from the Indian government for export to certain countries in order to ensure their food supply.

Only shortly before the ban did Indian government officials announce that they wanted to help and export significantly more wheat in the face of an impending shortage of wheat on the world market in the wake of the Ukraine war.

The African Union (AU) is worried about the food supply of African countries because of the EU sanctions against Russia. The exclusion of Russian financial institutions from the international Swift payment system makes it difficult to pay for important agricultural products, which puts the food supply at risk, said the AU chairman, Senegal's President Macky Sall, at the EU summit.

Sall addressed the EU heads of state and government gathered in Brussels via video conference. He stressed that Russia's blockade of the Ukrainian port of Odessa is severely affecting Ukrainian food exports. That is why the AU supports the efforts of the UN to lift the blockade.

The African countries are also "very concerned" about the European sanctions, said the Senegalese President. "If the Swift system is disrupted, it means that payment becomes complicated, if not impossible, even if the products exist." In addition to a far-reaching oil embargo against Russia, the EU summit also agreed on the Swift exclusion of other Russian banks. Sberbank, Russia's largest financial institution, is one of those affected by the sanctions.

Sall also warned of massive crop failures in Africa. It is estimated that grain yields could fall by 20 to 50 percent this year, he said. In his message, he also criticized increased fertilizer prices and the effects of the Ukraine war. Sall stressed that everything must be done to free up available stocks of grain and ensure their transport to prevent the "catastrophic scenario of shortages and general price increases".

Russian Foreign Minister Sergei Lavrov, on the other hand, is calling on the West to help resolve the crisis. "Western countries have created a lot of artificial problems by closing their ports to Russian ships and cutting logistical and financial chains," Lavrov said during a visit to Bahrain. "They have to seriously consider what is more important to them: do PR on the food security issue or take concrete steps to solve this problem."

Lavrov also called on Ukraine to remove naval mines from its territorial waters to allow ships to safely navigate the Black and Azov Seas. "When the problem of demining is solved, (...) the Russian naval forces will ensure the unhindered passage of these ships to the Mediterranean Sea and further to their destinations," Lavrov said.

Turkey wants to mediate to find a solution to the crisis. Russian Foreign Minister Sergei Lavrov will hold talks with a military delegation in Turkey on June 8 to explore the possibility of a sea corridor, Turkish Foreign Minister Mevlut Cavusoglu said. Cavusoglu told the official Anadolu news agency that there were talks with the United Nations in this regard.

The UN has therefore proposed setting up a joint monitoring mechanism to monitor shipping routes. Turkey is open to such a proposal. Nevertheless, there are still points of contention between Russia and Ukraine, said Cavusoglu. For example, Russia is demanding that Western sanctions against the insurance industry be lifted because they also affect ships that are needed for exports. Meanwhile, Ukraine wants to prevent Russian warships from landing in the port of Odessa.

The Presidents of Turkey and Russia, Tayyip Erdogan and Vladimir Putin, discussed the issue over the phone on Monday. Putin promised to make the export of the blocked grain possible in coordination with Turkey. Russia has now taken control of large parts of Ukraine's Black Sea coast. The country's largest port in Odessa is blocked by Russian warships. Millions of tons of Ukrainian grain, which cannot be exported and is of great importance for the world market, are stored in the docks. 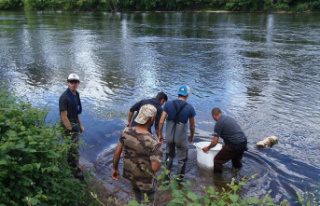