Successes for Höcke and Chrupalla: The AfD wants to get out of the crisis even more on the right

Counted, but ultimately successful, Tino Chrupalla can assert himself and his candidates on the AfD federal executive board. 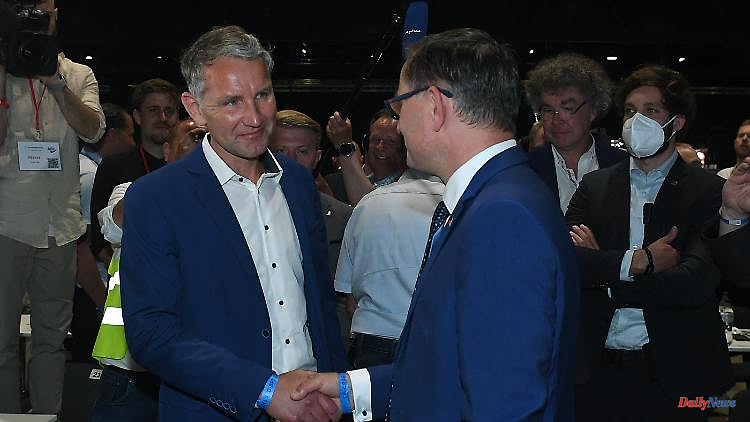 Counted, but ultimately successful, Tino Chrupalla can assert himself and his candidates on the AfD federal executive board. This is how the party wants to overcome the chronic camp struggles. Present like never before at an AfD federal party conference: Björn Höcke, who wants to shape the party in new ways.

Anyone who wanted could hear something like relief in Tino Chrupalla's voice: "The Meuthen era is over today," said the newly confirmed AfD federal spokesman when both federal spokesmen and their three deputies were elected at the federal party conference in Riesa on Saturday afternoon . With co-spokeswoman Alice Weidel and deputies Stephan Brandner, Peter Boehringer and Mariana Harder-Kühnel, only applicants who were on Chrupalla's "Team Future" list of suggestions were accepted. Even when the remaining nine board positions were allocated, it was already becoming apparent that further "future" candidates would be elected and that this "Team Chrupalla" would set the tone in the new board.

So what Chrupalla actually meant: The dominance of former federal spokesman Jörg Meuthen, who left the party a year ago, on the federal executive board is over. His predominance had contributed to a paralyzing split in the AfD, because the AfD representatives who dominated the parliamentary group and the public were mostly from the East and politically belonged to the now officially dissolved wing of Björn Höcke. "You couldn't do it any worse," said Weidel about the federal board that has now been replaced. The AfD will leave the dispute behind and henceforth appear as one, said Chrupalla. "Today the departure of the AfD begins."

The AfD parliamentary group leader unintentionally raised the bar for himself on Friday and Saturday. Chrupalla explained ten elections in a row, which were disappointing for the AfD, as well as a slow but continuous decline in members, with the dispute in the federal executive board and with internal party communication problems in the wake of the corona pandemic. Both justifications will no longer apply in the future if the Chrupalla camp dominates the board and the AfD should also have learned how to position itself digitally as a party.

Chrupalla met with clear distrust on Saturday: only 53.5 percent of the 538 voting delegates voted for the incumbent. His challenger, Norbert Kleinwächter, got 36.5 percent, although he was hardly known in the party. Chrupalla thus had by far the weakest result of all elected chairmen and their deputies. Weidel, on the other hand, got more than 67 percent of the votes and earned a lot of applause. Their core message: "Voters hate nothing more than a party that is preoccupied with itself."

Preaching unity also seemed like a good idea to other party members. After party conferences that were often chaotic recently and conflicts in the party and parliamentary groups that were repeatedly carried out to the outside world, peace should finally come into the party. She's done that many times before. It remains to be seen whether it will work if the East associations and West German wing sympathizers dominate the new federal executive board. In any case, the former Meuthen friends took a noticeable step back this time. Criticism of AfD politicians, whose statements encouraged the Office for the Protection of the Constitution to monitor the party, was not heard this time. Instead, candidates came to the board who expressed sympathy for the right-wing extremist Andreas Kalbitz, who was excluded at Meuthen's instigation.

Furthermore, with the faction chairmen Chrupalla and Weidel as well as other federal and state parliamentarians, almost exclusively mandate holders were elected to the board. The predominance of "professional politicians" does not fit with the AfD's self-image of being a grassroots democratic party. Conflicts are just as likely to arise here as with the fact that national liberals who do not think in nationalist terms should hardly feel that they are represented by this board.

The AfD course conspicuously bears the lettering of the Thuringian right winger Höcke. The chairman of the AfD parliamentary group in Erfurt was present at this party conference like never before: he successfully raised a two-thirds majority for his amendment to the statutes, according to which solo party leaders should also be possible in future instead of dual leadership. In addition, the party conference followed Höcke's plea for electing a double board in Riesa again. It was just as striking how explicitly Höcke supported Chrupalla and Weidel. He denied that he saw both only as interim executives until he took over the party himself. "I'm assuming that both will prove themselves," Höcke told broadcaster Phoenix.

On the other hand, Chrupalla supports Höcke's proposal to set up a "party structure reform" commission, which Höcke would like to chair himself. As head of the commission, he would also be a member of the federal executive board and be able to appoint ten people who belong to the committee. In addition to questions of content and organization, the commission, whose appointment will be decided on Sunday, will also deal with the qualification of political personnel. Höcke, it seems, is expanding his influence on the AfD - while the federal executive is closer to him politically and personally than ever before.

1 After indigenous protests: Ecuador's government... 2 The lost candidate: the Georgians want to join the... 3 Briefing and award: Zelenskyj visits frontline region... 4 After deportation flights were stopped: London clamors... 5 Party of Ostpolitik: "A large part of the SPD... 6 Party determines new board: Chrupalla and Weidel elected... 7 Motion by the parliamentary group: Union calls for... 8 Up to 50 percent of equipment: Ukrainian general admits... 9 "A complex puzzle": BKA investigates Russian... 10 After shelling from Gaza Strip: Israel fires rocket... 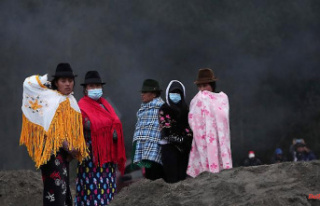