DzhokharTsarnaev was found guilty of conspiring with his brother to detonate two pressure cooker bombs at the finish line for the 2013 marathon, killing three and injuring hundreds more. 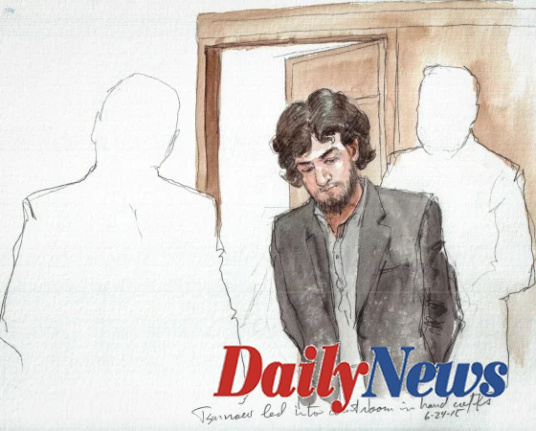 The court voted 6-3 to reject defense claims that Tsarnaev's trial judge in 2015 restricted the questioning of potential jurors and wrongly excluded evidence of another crime two years prior to the bombing.

Tsarnaev was found guilty of planting and detonating 2 pressure cookerbombs in separate locations near the finish line for the 2013 marathon. Three people were killed and hundreds more sustained serious injuries in the blasts.

The second phase of the trial saw the same jury recommend capital punishment for the deaths caused by the bomb that the younger Tsarnaev set off. Four days after the bombing, his older brother was shot to death by police officers.

The U.S. has a three-judge panel. The Court of Appeals for 1st Circuit ordered a fresh sentencing hearing. It unanimously ruled that U.S. District Judge George O'Toole Jr. did not allow sufficient questioning of potential jurors regarding how closely they followed extensive news coverage of bombings.

The Supreme Court disagreed. Justice Clarence Thomas, writing for the majority, stated that trial judges are free to decide what questions prospective jurors should be asked. "This discretion doesn't disappear when a case is made public."

Appeal court also ruled that the judge should have allowed Tsarnaev’s lawyers to bring up the 2011 triple murder in the Boston suburb Waltham. Investigators believed Tamerlan Tsarnaev was responsible. To show that Tsarnaev's older brother was more powerful than his younger brother, the defense used the earlier crime.

Tsarnaev's lawyers didn't deny his involvement in the marathon bombing. However, they claimed that he was easily controlled by his brother who they called the mastermind.

According to the Justice Department, the evidence regarding who committed the Waltham murders is not reliable. Tamerlan Tsarnaev, and another man who was suspected of being at the crime scene, were both deceased by the time the bombing trial began. This meant that there was no way for anyone to know what actually happened.
Thomas claimed that the appeals court also misunderstood this point. Federal death sentence hearings are "not evidentiary free for alls". Judges may exclude evidence if it would unfairly prejudice the jury or confuse and mislead them, Thomas wrote.

Stephen Breyer, Sonia Sotomayor and Elena Kagan, the three dissident justices, stated that the judge should have allowed jurors to hear evidence about the Waltham murders.

Breyer wrote that Dzhokhar's mitigation defense was crucial because it was evidence of the older brother’s violent nature, and ability to influence the younger Tsarnaev.

Also, the government argued that a new sentencing hearing could further traumatize Boston's community and force bombing victims to take the stand once more to recount the horrors Tsarnaev caused.

Joseph Bonavolonta (special agent in charge FBI Boston office) said that Friday's ruling was a victory for the survivors and victims of the case. He added, "Our hearts are with them who have been through so much over the past nine years and have shown incredible strength and resilience."

Tsarnaev will be on Colorado's death row for the remainder of his life. Although Attorney General Merrick Garland had ordered a cease to executions in the federal system, the Biden justice department maintained the same position it did under Trump's administration and defended the death sentence for the bombing.

Prosecutors were not stopped by Garland's orders from seeking the death penalty. Corona relaxation: Finally back in the club