The day of the war at a glance: Mocked Putin sees Russia as a scapegoat - Moscow expands war goals

A video clip of Vladimir Putin caused malice on the Internet, while the Russian ruler wants to rebuild Donbass and sees Russia as a Western scapegoat. 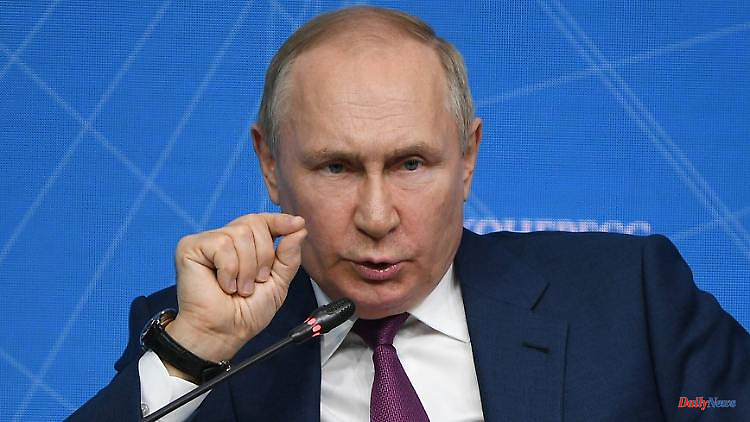 A video clip of Vladimir Putin caused malice on the Internet, while the Russian ruler wants to rebuild Donbass and sees Russia as a Western scapegoat. Meanwhile, gas is scheduled to flow through the Nord Stream 1 pipeline again from Thursday and Moscow is expanding its war goals. The 146th day of the war at a glance.

According to Governor Valentyn Reznichenko, two people were killed and nine others injured in a Russian attack on the city of Nikopol in the Dnipropetrovsk region. Four children were among the injured, the youngest being three years old, Reznichenko said. Three houses in the attacked residential area were completely destroyed.

In the city of Kharkiv, three people were killed by Russian shelling and another person was injured. Apparently, a Russian missile hit a bus station in Saltivka, a northern district of the city. Among the dead is a 13-year-old boy, confirmed Kharkiv governor Oleh Syniehubov.

According to a report by the Russian news agency TASS, the strategically important Antonovsky Bridge over the Dnieper was so badly damaged by Ukrainian attacks that it is expected to be closed to traffic. The agency relied on information from the Russian authorities in the southern Ukrainian region of Kherson. The British Ministry of Defense had previously said, citing intelligence reports, that the bridge was likely still usable. However, it is a weak point for Russian troops in the occupied region opposite the Crimean peninsula annexed by Russia.

According to their own statements, Russian troops have hit important weapon systems and depots of the enemy in Ukraine. A warehouse with ammunition for Ukrainian rockets near Soledar in Donbass was destroyed. This was announced by the Ministry of Defense in Moscow in its situation report. A launch pad for US-made Harpoon anti-ship missiles was also destroyed in the Odessa region. The information provided by the Russian military was not independently verifiable.

According to Foreign Minister Sergey Lavrov, the geographical goals of the Russian war of aggression in Ukraine are no longer limited to the Donbass. They are already affecting a number of other areas, he said, according to the Russian news agency RIA, and is threatening further expansion. If the West supplies the leadership in Kyiv with long-range weapons, then the geographic targets in Ukraine will be expanded even further. Lavrov also rejected peace talks. Resuming talks with Ukraine does not make sense at the moment, said the Foreign Minister. Ukraine then criticized the Russian threats to capture more territories. "Russia discards diplomacy and is focused on war and terror," Ukrainian Foreign Minister Dmytro Kuleba wrote on Twitter.

Russian President Putin has long been known for keeping state guests waiting. Now he himself fared like those he wants to impress with it. At his meeting with Turkish President Erdogan in Tehran, it was Putin who had to wait an agonizingly long time for his interlocutor. A video of it - and Putin's facial expressions - caused plenty of malicious joy on the Internet. "Putin gets a taste of his own medicine," wrote one user on Twitter. You can see the "entire range of emotions from the 'humiliated and insulted'".

Kremlin chief Vladimir Putin accuses Western politicians of blaming Russia for their own misconduct. In many countries it has already become "fashionable" to speculate in the energy sector, for example, Putin said, according to the Interfax agency. "You scare people with these problems, and then they make decisions that are unreasonable and unpredictable. And the next step is: you look for culprits." As an energy supplier, Russia is held responsible, although it has nothing to do with it.

Gas deliveries through the Nord Stream 1 pipeline have been announced for Thursday after the end of routine maintenance. This emerged from preliminary data from the network operator Gascade. Gascade operates the two receiving points of Nord Stream 1 in Lubmin in western Pomerania. According to the Gascade website, gas deliveries are reserved for both points. According to the Federal Network Agency, slightly less gas was announced for the day after the scheduled end of maintenance on Nord Stream 1 than before the maintenance work. In a tweet, the head of the Bonn authority, Klaus Müller, called 530 gigawatt hours for Thursday and thus only 30 percent of the utilization. Initially, he had predicted 800 gigawatt hours. In the days before the maintenance, Nord Stream 1 was worth around 700 gigawatt hours.

Russian President Vladimir Putin has announced that the cities of Donbass will be rebuilt after the severe destruction caused by his war in Ukraine. There is a lot to do in the "people's republics" of Luhansk and Donetsk, said Putin. "Therefore, our country will help the Luhansk People's Republic and the Donetsk People's Republic," he said at a video conference with children and young people. It will take "months, weeks and years" to restore order in Donbass, Putin said.

The US government wants to supply Ukraine with four more HIMARS multiple rocket launchers in the fight against the Russian invaders. US Secretary of Defense Lloyd Austin said at an online meeting of the Ukraine Contact Group that the HIMARS missile launchers delivered so far have "made so much difference on the battlefield". The US would also provide additional weapons, ammunition and equipment, including missiles and artillery shells, as part of the next package for Ukraine. Details would be announced later in the week.

1 Charité showed NRW: relief points could bring 300,000... 2 Only in reduced quantities: Gas deliveries announced... 3 "There is no superiority": the DFB team... 4 14 top devices in Warentest: Only a soundbar under... 5 Thuringia: Already hot in the morning: record temperatures... 6 The day of the war at a glance: Moscow expands war... 7 Dow slightly up: Wall Street continues to recover... 8 Private audience in the Vatican: Albert and Charlène... 9 "Bachelorette" in the battle arena: the... 10 Funeral in Manhattan: Donald Trump pays last respects... 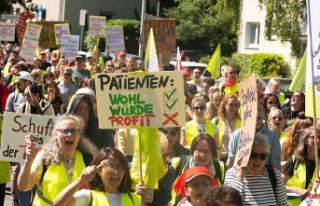