The day of the war at a glance: Putin wants to upgrade the navy - Experts: Russia has lost 5,000 military vehicles 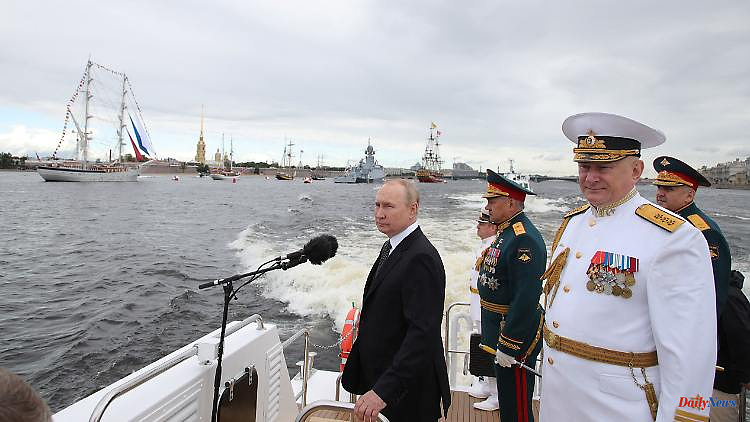 Russia celebrates its Navy. At a big parade far away from Ukraine, President Putin announces a new naval strategy. Meanwhile, the military is again taking Mykolaiv under heavy fire - and killing a grain businessman. The 158th day of the war at a glance:

The Russian army again came under heavy fire on the southern Ukrainian city of Mykolaiv. Mayor Oleksandr Senkevych said in the online service Telegram that the city was "massively" and "probably more heavily than ever" shelled in the morning. About half of the once almost 500,000 inhabitants are said to be staying in the shipbuilding town. According to Ukrainian sources, a number of residential buildings were damaged in the regional capital of Mykolaiv and several fires broke out.

One of Ukraine's most important grain traders was killed in the attacks on Mykolaiv. According to Ukrainian authorities, Oleksiy Vadaturskyj, owner of the grain logistics company Nibulon, died in his apartment building together with his wife Raisa. Ukrainian presidential adviser Mykhailo Podoliak wrote on Telegram that Vadaturskyi was killed on purpose. The projectile hit the bedroom of the family's house, there is "no doubt": "Vadaturskyj was the target."

The southern regional capital Mykolayiv had been attacked almost daily in the past few weeks. The Ukrainian army recently launched a counter-offensive in the neighboring region of Cherson, which had been conquered by Russia.

On the Crimean peninsula, annexed by Russia in 2014, the traditional celebrations of "Navy Day" were canceled in the port city of Sevastopol. In other regions of Russia, however, there were celebrations, in St. Petersburg President Vladimir Putin took part. The reason for the cancellation was a night-time drone attack on the headquarters of the Black Sea Fleet, wrote the governor of Sevastopol, Mikhail Rasvoschajew, on Telegram. Six people were injured in the explosion in the courtyard of the barracks. He attributed the alleged attack to Ukraine, but their navy denied it. The Russian allegations are "a deliberate provocation," said a spokesman for the Odessa regional administration in a video published on Telegram. "The liberation of occupied Ukrainian Crimea will be done in a different, much more effective way."

The Russian Black Sea Fleet is stationed in Sevastopol. She has already lost her flagship "Moskva" in the war. Other ships have been withdrawn from the naval port for fear of anti-ship missiles, according to Ukrainian sources.

At the "Navy Day" celebrations in St. Petersburg, Russia's head of state Vladimir Putin put a new military doctrine for the country's naval force into effect. Russia's sea borders, including in the Arctic and the Black Sea, were also defined there. "We will ensure protection with all means and by all means," emphasized the Kremlin chief at a parade with warships. Above all, the USA and NATO are mentioned as threats to Russia's security.

The new doctrine expressly emphasizes that Russia can use military force to assert its interests on the high seas once all attempts to resolve the conflict through diplomatic channels have been exhausted. According to the document, the presence of a "sufficient number" of naval bases outside Russia's borders is to be expanded. In addition, the construction of modern aircraft carriers is planned. The individual fleets are to be expanded. Putin also announced that the new hypersonic naval missile "Zirkon" would soon enter service. The frigate "Admiral Gorshkov" will be the first to be equipped with it.

According to military experts Stijn Mitzer and Jakub Janovsky, the Russian army has lost more than 5,000 vehicles, planes and ships since the invasion of Ukraine began. The two begin early on to document and list lost equipment in Ukraine and Russia. They only confirm losses that are also documented with photos or videos. Russia is said to have lost 5,010 vehicles and aircraft since February 24, including 916 tanks. Ukraine, on the other hand, is said to have lost almost 1,400 vehicles, aircraft and ships.

The International Committee of the Red Cross (ICRC) waited in vain for access after dozens of Ukrainian prisoners of war died in a Russian-controlled camp. A spokesman in Geneva said there was no access to the site until Sunday afternoon. The Russian Defense Ministry, on the other hand, said in Moscow that it had invited the ICRC to visit.

According to Russian information, 50 Ukrainian prisoners of war were killed and dozens injured in the prison in Olenivka near Donetsk on Friday night. The Ministry of Defense speaks of a targeted rocket hit by the Ukrainian army. However, the first pictures from the region rather speak against this version. Ukraine speaks of a war crime; Russian forces would have killed the prisoners.

Turkey expects to start grain exports from Ukraine via the Black Sea this Monday. The probability that a ship loaded with grain will leave a Ukrainian port on Monday morning is very high, said the spokesman for Turkish President Recep Tayyip Erdogan on Channel 7. There are only one or two details to be solved, according to Ibrahim Kalin.

On July 22, wartime opponents Ukraine and Russia signed an agreement with the UN and Turkey to allow grain exports from Ukraine from three ports. According to Ukrainian sources, more than 20 million tons of grain from last year's harvest are still waiting to be exported. After the Russian invasion at the end of February, port operations were suspended for security reasons - Moscow is accused of blocking the grain. The UN increasingly fears hunger crises in the world due to the lack of grain deliveries. 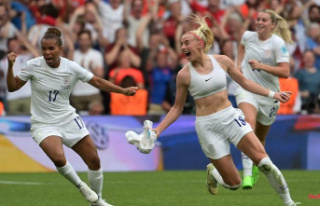